We promised that new and exciting things were coming to the Overthinking It Book Club, and that time is here. For our next edition, we’ll be applying a very loose interpretation of the “Book” part of the Club: the next text we’ll be discussing on the book club is the 1994 classic game for the SNES, FINAL FANTASY VI.

As much fun as we had with Ender’s Game and Slaughterhouse-Five, it’s not exactly groundbreaking to subject a novel to an extensive breakdown in a book-club style format. For our next “Book” Club, we wanted to do something a little different, and live up to the site’s motto (“it probably doesn’t deserve…”) by subjecting a new medium to the level of scrutiny usually reserved for literature and film. Video games seemed like the perfect fit, as the medium has had to battle to even be considered “art.” Most famously, film critic Roger Ebert argued in 2010 that “Video Games Can Never Be Art.” 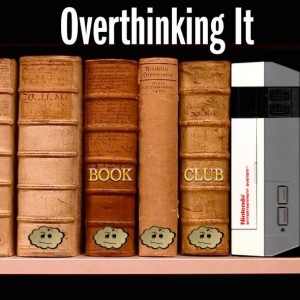 So in that grand tradition, the Book Club will be tackling the seminal gaming classic, Final Fantasy VI. FFVI is a landmark of the RPG genre, and regularly appears near (or at) the top of “all-time best games” lists. It came out almost exactly 20 years ago, debuting in North America in October of 1994, so we decided there was no better time to revisit a classic game and subject it to some intense Overthinking.

The Final Fantasy VI “Book” Club will be an exercise in testing experimentally whether video games can be art. Can a video game withstand the same sort of artistic and critical scrutiny that a novel or a film can? Does the fusion of plot with participation allow for meaningful artistic experience? Can Overthinkers actually get it together to play through a 30-hour game and talk about it for 6 months?

The Book Club unfolds in weekly segments on the Book Club Podcast, released mid-week, with Ben and other Overthinking It writers. We’ll talk over the week’s reading, address some of the study questions, and highlight our favorite discussions from the forums. 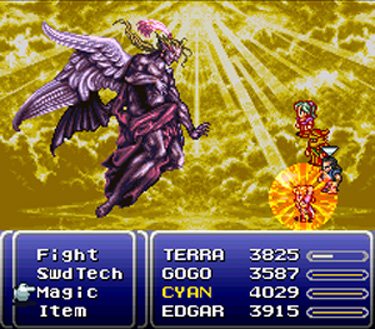 As we have with our previous texts, the Book Club will break the game into chunks to discuss in detail, close-reading the plot, setting, characters, and theme, while placing the text into a wider context of philosophical and artistic thought. To give everyone time to start the game, we won’t start releasing episode and discussing until a few weeks from now.

Of course, unlike a book, FF VI does not necessarily have firmly established “Chapters” that we can use to keep everyone playing at the same pace. For convenience, we’ll be using the chapters from this strategy wiki, but of course we’ll expect that everyone will complete the game in their own unique way – that’s part of the fun!

The most important part of the Book Club is getting the entire OTI community involved. For our discussion, we’re going to use a special section in the Overthinking It Forums. We’ll open up a thread for each Week of the Book Club, and everything up to and including the week’s reading is fair game for discussion—but if you’ve read the book, no spoilers for what is to come! (We’ll have a whole-book thread for those who have read it before.)