Besides Breaking Bad, the only piece of pop culture I’ve consumed of late has been the wacky shoot-em-up / sandbox / city takeover game Saints Row the Third. On a superficial level, these are about as divergent a pair of entertainments as one could conceive. Breaking Bad dwells on the after-effects of violence: the scar on Walt’s hand, Hank’s PTSD following the shootout with Tuco, Ted Benneke’s accidental injury, Jesse’s reaction to his first kill, and other incidents I’d have to throw up a spoiler warning in front of. The protagonist of SR3, conversely, can not only freefall through a plane in flight, knee a bad guy in the face, strip him of his parachute, and jump out the back, but she can eventually upgrade herself, through the game’s respect-driven XP system, to be immune to bullets.

While the Saints Row series started off as an obvious GTA clone, successive entries got weirder and wilder. The crowning achievement (so far) is Saints Row IV, in which your protagonist stops a terrorist attack, becomes President of the United States, watches the Earth get savaged in an alien attack, gets dropped in a Matrix-style simulation, and hacks this simulation to gain superpowers, all within the first half-hour or so of gameplay. (I’d normally throw up a SPOILER warning, but all of that comes so quickly, and is such a big selling point of the game, that it’s hardly a surprise)

I haven’t played SR4 yet, and in fact I’m only about halfway through SR3. But the game doesn’t shy away from either its high-stakes action or the ridiculousness of its premises. At almost exactly the halfway mark, your shenanigans attract the attention of the U.S. Senate, who deploys a heavily armed military unit to occupy Steelport (the city you’re taking over). You escape their ambush in a frenetic car chase, pursued by local cops, armored Humm-Vees, and a laser-wielding VTOL jet. Your goal is the giant purple skyscraper that you took over in the first forty-five minutes of the game – the Saints HQ in Steelport. Once you get there, the chase is over: you’re safe.

Given that an entire super-military unit is arrayed against you, is it plausible that you’d be “safe” in a giant, visible skyscraper? No more so than it would be plausible that you would free an intelligent, super-strong giant from a cloning facility and recruit him to your aid, or that a nebbishy science student would clone your deceased friend, unwittingly creating a genetic monster, or that you would prove your worthiness to a disgraced luchadore by driving a hungry tiger around the city in a convertible. To say nothing of the Genki Manapult.

My point: the GTA series, which inspired Saints Row, has, since at least the third installment, aimed for a level of seedy realism. Yes, you could buy guns and ammo over the counter in bulk at Ammu-Nation, and the radio DJs were always just a little too goofy to be plausible. But your stunts were narrowly confined to the realm of, at worst, the biggest Bruce Willis movie (sometimes a little bit Die Hard, sometimes a little bit Hudson Hawk).

Of course, this isn’t to say that GTA requires serious gameplay. Far from it! One of the time-honored joys of GTA is mowing down pedestrians in a sports car until the Wanted Level gets to five stars, waiting until the National Guard sends a tank after you, then hijacking the tank. The sandbox nature of Liberty City, Vice City, and Los Santos encourage a freewheeling, self-determined sort of gameplay. At the end of the day, however, you’re a normal man acting out extreme impulses in a fairly normal universe. The bulletproof vests that pop up all over the place may soak a surprising amount of injury, but you can’t weather automatic fire as if it were a light hail. You play GTA as if you were a normal person in a dingy but otherwise predictable world.

Whereas the last thing you could say of SR3 or SR4 is that it’s predictable. You play SR3 as if you were a video game character – which is in fact what you are. If you knew, in your heart of hearts, that the worst fate you could suffer was waking up in a hospital a few bucks poorer, you’d drive down the wrong lane of a crosstown bridge, too (MAX RESPECT).

In that way, SR3 and SR4 are strong contenders for what I call the next generation of video games that transcend both the deontological and the teleological – truly “meta” games that make you question just what it is to be playing a video game in the first place. When you sit down to play a video game in which “you,” the leader of the Saints, enlist in a hyperviolent reality show in which “”you”” compete for cash and prizes that can be redeemed for Respect that “you” can use to advance so that you can have a more thrilling video game experience … well, we’re pretty deep into the rabbit hole.

And this doesn’t even touch on SR4 (which, again, I haven’t played yet), in which your character is thrown into a computer simulation of the setting of SR3. It’s not just self-referential (anyone can pull that off) – it’s ironic, literate, and deeply entertaining. 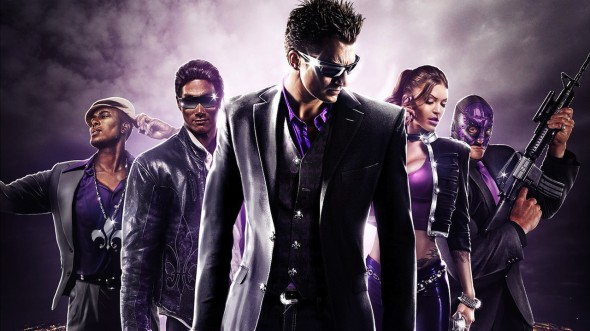 2 Comments on “The Surprising Depth of Saints Row”