riverrun, past Link and Zelda’s, from Great Sea’s Shore to Zora’s Bay, brings us by a save and continue of revivification back to Hyrule Castle and Environs.

There is a boy. His name is always Link. There is sometimes a princess; her name may or may not be Zelda. There is a villain, who may be named Ganon or Ganondorf; he is sometimes a bandit chieftain, sometimes a giant pig sorceror. Link might progress in a linear chronology, or he might travel through time. He often reaches Death Mountain, though sometimes this is the end of his adventures and sometimes merely a midway point. Sometimes he has a grappling hook; almost always he has bombs and boomerangs. Music is always important.

Which Zelda game am I describing? Potentially any of them (except perhaps Majora’s Mask). Even the ones that are notionally sequels or prequels feature many of the same elements in recognizable arrangements. Link is always defeating Ganon or someone like him, always rescuing Zelda or someone like her. There have been attempts to render Link’s various adventures into a hard chronology and environment, but that’s clearly a retconning, not the original vision of Shigeru Miyamoto over twenty-seven years ago.

It’s not important to the designers that the story of Link and Zelda, when viewed in sequence, make any sort of narrative sense. Rather, it’s important that each individual installment work. When you pick up the controller for Ocarina of Time, you might not know why Link lives in a village of faerie children or who the final villain will turn out to be. But you know that boomerangs paralyze bad guys, that arrows are in limited supply, and that you’ll need to overcome the challenges of a series of dungeons in order to reach the last boss. When Zora or Stalfos or the hand that drops from the ceiling and takes you somewhere show up, you’re meant to slot them into your existing understanding of those characters – even if that understanding is meant to change (Zora is a potential ally this time; Stalfos in Ocarina of Time is a much more heinous and challenging enemy than in the original Legend of Zelda; etc). 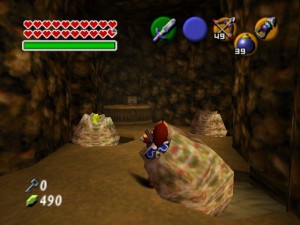 And THESE THINGS. Ugh.

In this way, the Legend of Zelda series has something in common with Finnegans Wake, James Joyce’s last and least accessible work. As you may have heard us mention on the podcast once or twice, Finnegans Wake took Joyce seventeen years to write, and he supposedly said that it ought to take a person seventeen years to read it too. It’s known for its cyclical nature, its frequent tangents, and its habit of tossing characters in and out of particular roles interchangeably.

If Finnegans Wake has a protagonist at all, it’s the protean “HCE,” whose initials may stand for “Humphrey Chimpden, Earwicker.” HCE also passes himself off as “Here Comes Everybody” later in the novel. He may be a reincarnation of Finnegan, the man whose wake begins the novel, who is described as a “man of hod, cement, and edifices.” He may also be a reincarnation of Finn MacCool, warrior hero of Celtic myth. These multiple identities are alluded to throughout the text, in tangents and prose poems and made-up words.

HCE has a wife, Anna Livia Plurabelle (ALP), who doesn’t get much chance to speak until the very end of the book. A letter from her becomes instrumental in defending HCE, however, plagued by rumors as he is in Book I of the novel. ALP. may also be the river Liffey, which flows through the center of Dublin. I lay all this out because that’s the kind of book Finnegans Wake is.

There are dozens of other characters who recur and recurve as well, appearing multiple times and in multiple forms, such as HCE and ALP’s children: Shem the Penman, Shaun the Postman, and the girl Issy. Their transformations and translations are as many as HCE and ALP’s, so it won’t serve us to go into overlong detail.

I’m not trying to lay out a point-by-point parallel with Finnegans Wake and the Legend of Zelda, since I don’t think Miyamoto was consciously aping Joyce in the way he structured the games. But a great deal of hard clarity and energy has been put into, if not making sense of Joyce, understanding why he wrote the way he wrote. I think we can borrow some of that same analysis to come at a more interesting understanding of the Zelda series.

This all came to me not because I’m any great shakes as a Joycean scholar, but because of parallels I noticed upon completing Samuel Delaney’s Dhalgren. Like Finnegans Wake, Dhalgren is one of the more challenging novels of the 20th century (when I bought it at Barnes & Noble, the clerk said “good luck”). It’s one of the few science fiction novels that deserves entry, without qualification, into the literary canon. It’s also vastly more subversive than I would typically associate with science fiction, a genre that struggles at times to move through its jetpack-and-raygun days. 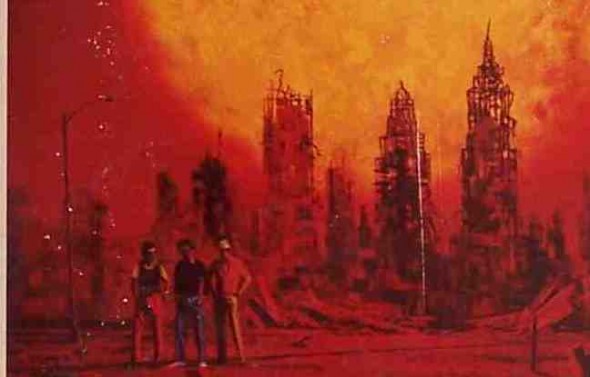 Dhalgren is one of those novels that doesn’t give you much of a hook for what it’s “about” (so feel free to lose interest at this point). It follows the travails of an unnamed narrator, referred to at various points as “the kid” or “Kidd,” through the city of Bellona at the center of the United States. Some unspecified cataclysm has struck Bellona and conventional law and order have been abandoned. But people still live there and still flock there, as the kid (Kidd) does. Packs of armed marauders, cloaked in giant animal holographs, roam the streets, along with itinerant preachers, freelance journalists, experimenting hippies, and misplaced bohemians.

The kid stumbles into this microcosm for reasons that are never clear. He discovers two useful tools shortly after entering the city. The first is a trio of blades meant to be mounted on the back of the hand, an orchid, tossed to him by a stranger whom he passes on the way into Bellona. The second: a notebook with half the pages already filled. He starts writing his own poetry, drifting from one faction to the next. In the process, he discovers that a myth of sorts is building around him, partly inspired by daring actions he takes within the city, partly inspired by things the kid doesn’t remember at all.

Dhalgren is about many things, but high on the list is the notion that identity – I am; it is – is not a fixed property. The legend of the kid grows without any conscious effort on his part to build it, until he finds himself a reputed figure, much to his own confusion. The kid himself is an ambivalent bisexual, and of a vague enough ethnic background that none of the city’s enclaves know whether to claim him. The city of Bellona means different things to everyone who lives there – the gangers, the love children, the poor black community, the drop-outs, the misfits. The city literally changes without warning: duplicate moons appear in the sky; buildings burn incessantly without deteriorating, then vanish overnight.

I was first drawn to the parallel between Dhalgren and The Legend of Zelda by the orchid. Without spoiling the novel – can you spoil a non-linear book that defies narrative conventions? – the orchid becomes especially significant toward the end. It’s a weapon, yes, but it’s also a gift: a bit of generosity from one stranger to another. With it, the kid is defended, but he’s also very much armed. He enters every situation with a bladed gauntlet dangling from his belt, a circumstance that occasionally gets him in trouble. 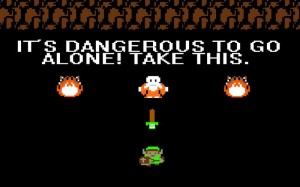 Dhalgren is a consciously Joycean novel, which inspired me to look a little further. Just as the kid is a person of no fixed identity – a vagabond, a lover, a hero, a poet; someone who can barely recognize the stories being told about him – so too is HCE a figure of multiple dimensions. He is both a person and a sentiment (“Here Comes Everybody”) and a place (“Howth Castle and Environs”) and a giant out of legend (the titular Finnegan). He is a monomyth – a neologism that Joyce invented in Finnegans Wake – a man both real and legendary, a man with no fixed identity but whose exploits are patterned.

Could the same not be said of Link? Most of the Zelda games take place in very open worlds, with adventures both mundane and epic. What would Hyrulean storytellers a generation hence say of Link? Oh, yes, he’s the young man who saved the princess from Ganon with his bow and magic sword. No, he wasn’t a young man; he was a kid. It wasn’t a bow he wielded; it was an enchanted mask. Also, he had an ocarina, and he used it to summon the wind. No, Link’s that asshole who smashed all my pots.

The point of this exercise isn’t to assert that Miyamoto had a particular fascination with James Joyce. That’s the sort of assertion that can be easily proven or disproven by consulting the historical record or finding the right interviewer. Interpreting any work of pop culture through a particular lens does not presume authorial intent (we say this a lot; it’s worth repeating). You can read the works of Coleridge with a Marxist interpretation, even though Coleridge’s corpus predates Marx’s by several years. Rather, to interpret one work through a particular philosophy or authorial viewpoint is to say, “Insofar as this philosophy or author says true things about the world as we find it, those true interpretations may also be applied to this work, regardless of the latter author’s awareness of that philosophy.”

What, then, do we gain by viewing the Legend of Zelda through a Joycean lens? For one thing, we are freed of the burden of continuity. Let the scope and direction of Link’s adventures change drastically from installment to installment. So long as he’s got a hookshot and some rupees, it’s the same guy.

So the story of the Legend of Zelda, then, is the story not of Link, or Zelda, or Ganon, but of Hyrule, a land that generates adventures and summons up adventurers, like leaves drifting off of it, yes, there’s where, the rupees insideish the tallish grassish, where Navi calls, coming, far, end here, off track, Link back, to continue to save, a shield a sword a link a long the 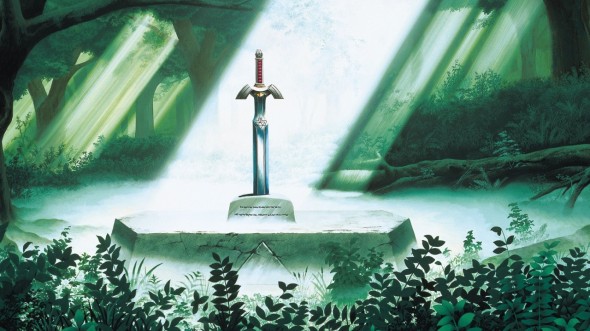 15 Comments on “Hyrule Castle and Environs: The Legend of Zelda through the Joycean Lens”