Badly-Made Plots:  Videogames and the Picaresque 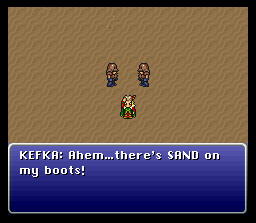 One could argue that the Figaro sequence matters in the long run because it motivates Kefka to get really really angry. One *could* argue.

Video game plots are almost never well-made in this sense.  On the one hand, you have plotless or near-plotless games, which don’t contain enough incident to qualify.  Tetris is about as causal as it gets, and sure, you can typically work out the ending in advance if you’re paying attention.  But a well-made plot it’s not.  On the other hand, you have plot-heavy games like RPGs.  Here, you run into the “A then B then … Z” problem, where the early stages of the plot aren’t connected to the later stages in any non-mechanical way.  Take as an example, the submersible sand castle sequence from Final Fantasy III née VI).  The main characters show up at a town called Figaro, pursued by the forces of the Evil Empire™.  The bad guys demand that the locals hand the heroes over, and the locals respond by activating the town’s special burrow mode and sinking into the sands.  It’s a pretty neat sequence, and — from the point of view of the gameplay experience — an important one.  It’s not just a random digression, as are the random fight scenes that make up %80 of the actual gameplay.  It’s a major cut scene, an important event in the ongoing plot.  And in the long term, it has no effect on anything whatsoever.  Or rather:  it only matters because it’s a pretext for Edgar to join your party.  And why does that matter…?  This is actually a rather profound question.  In grand narrative terms, Edgar doesn’t matter.  He helps the main character escape in this early sequence, he introduces you to another of the playable characters, and he has a couple of lines in the cut scenes.  But beyond that, he has no function.  We don’t learn anything important about him, he doesn’t do anything significant unless you happen to use him to peg one of the plottier bosses.  But from the point of view of playing an RPG, Edgar is super-important, because he’s a playable character — and one with some fun and useful abilities at that.  (“Flash” will save your ass, early-game.)  He’s important not as a person but as an object.  We care when we collect Edgar for the same reason that we care when we collect Pikachu:  you’ve got to catch them all.

Heavily narrativized games are lousy with characters and events like this.  In the original Final Fantasy, there’s a sequence where you need to feed a titan a ruby.  Why?  Because titans love rubies, and this one’s standing in your way!  In the proto-survival-horror game Alone in the Dark, there’s a point where you need to pacify a dining-room full of zombies by offering them a pot of soup.  Why?  Because zombies love soup, apparently! (Maybe best not to ask what was in it.) And in The Legend of Zelda:  Ocarina Of Time, you spend what I consider to be a frankly irresponsible amount of time, given the larger issues at stake, hunting down chickens for a random villager you meet.  On a local level, all of these tasks and characters are designed to be as colorful, evocative, and entertaining as possible.  But they build to nothing.  They derive from nothing.  They are powered, in narrative terms, by nothing.  Literature does offer a model for this kind of plotting, in which colorful episode succeeds colorful episode in turn until eventually, exhausted, the author calls it a day:  we call these novels picaresques, and their plots are not well-made.  All video games that have plots have picaresque plots.  And as a result, obviously, they can’t build up tension in any of the ways that well-made plots traditionally do.  Because the episodes that make up the picaresque, quasi-serialized plot of the game are disconnected from each other, there’s never a sense that they are building to an end.  There’s always room for one more — often quite literally, as a bonus stage or boss or dungeon or the like.  And as a result, the plot is never going to grapple with, or be energized by, a meaningful sense of constraint. 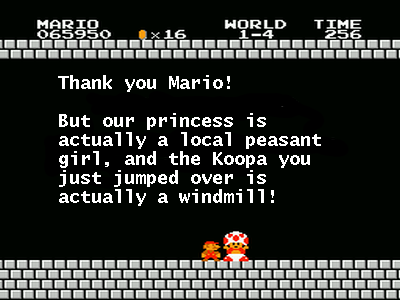 ... I really am a talking mushroom, though. Honest.

All of the big narrative questions that figure in traditionally well-made plots can feature in video games.  There are games that revolve around murder mysteries, games with heavy foreshadowing, and even games where you’re trying to find out more about the psychology of the player character.  The old point-and-click adventure Déjà Vu is all three of these, in fact — and hey, I ended up talking about it after all!  But these narrative questions do not matter in the same way in games as they do in other stories.  We fundamentally care about something else.  Video games are only ever dunnwhethers, and rather than caring about the characters’ actions, we care about our own skill.  In this sense, the big overarching question for plotless Tetris is the same as that for plot-addled Final Fantasy, assuming we play Tetris on the B-Type mode where a win condition does exist.  Will I be able to beat the game?  The major constraints we deal with when we play video games — and this should be painfully obvious to anyone who has ever played video games — are the constraints of our own skill.  That’s the struggle, and the primary excitement, that we take away from the experience.

But is that really all there is?

Academic videogame critics sometimes like to separate the game as game (the ludic element) from the game as story (the narrative element).  I almost don’t want to bring this up, because the line I just wrote constitutes the sum-total of my knowledge of academic videogame criticism, and I’m over my head here enough as it is.  But the ludic/narrative division is one neat way to get around the problem I brought up in the last paragraph.  By this way of thinking, the game’s “plot” is its narrative, and responds with a few adjustments to the standard toolkit we use for other kinds of narratives.  The gameplay on the other hand is entirely non-narrative:  it’s a system of rules we can manipulate and master, and nothing more.  So when we care more about beating a game than we do about the psychodrama of the characters, that’s just a function of our valuing the game element more than the story element.  This is certainly a useful division, and there’s probably at least a grain of truth to it.  But I don’t buy it.  Because in my own experience, there is something distinctive and untranslatable about the way that story, specifically, operates in videogames.  My goal here is to tease out what exactly that is.  Today I’ve just laid in the groundwork — hopefully next time, I’ll get a little further.