Modern physics states that the universe is governed by a set of five basic forces: gravity, the strong and weak nuclear forces, electromagnetism and heart. You’ll note right away that magnetism doesn’t stand on its own right, instead being inextricably tied to the electric force. The discovery that these two seemingly disparate forces are, in reality, just different facets of a single unifying phenomenon was one of the great triumphs of 19th century physics, and in many ways established the foundations of the 20th and 21st century’s electrically-powered society.  Let’s take a look at some salient features of magnetic fields and forces:

This is an over-simplified statement of Ampere’s Law.  Most of us are familiar with this principle from an experiment many did in elementary school: generating a magnetic field using a flowing electric current.  Just wrap a copper wire around a pencil a few times, connect its ends to the poles of a battery, and watch in awe as you’ve created an electromagnet! (Bonus: try and do this near the security checkpoint at an international airport. There’s nothing TSA finds funnier than exposed electronic components.)  The law is named for its discoverer, André-Marie Ampère, who used these devices to simultaneously solve 18th century France’s Excess-Pencil and Scattered-Paperclip Crises.  And all while having a girl’s name.  Good hustle.

My personal favorite of the classical electrodynamic laws, and it should be yours too if you’re into things like “making electricity from non-electricity.”  This is a grossly over-simplified statement of Faraday’s Law of Induction, the principle underlying the function of nearly every classical electric device: from electric turbines to those adorable hand-crank thingies they used to put on the front of cars.  More on those later. 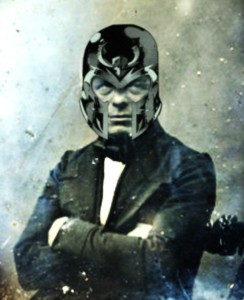 Michael Faraday, the true "Master of Magnetism," ca. 1845. Not pictured: other members of the "Brotherhood of Evil Natural Philosophers" (later renamed "The Royal Society of London.")

Note that this law brings a kind of symmetry (though not true symmetry in the mathematical sense) to Ampere’s law: by varying the field due to either electricity or magnetism, you simultaneously generate a field of the other component.  In fact, through clever tinkering, one can simultaneously exploit both of these principles as a means of wirelessly transferring power between two circuits.  Imagine an electromagnet of the sort described above, with its coil placed in close proximity to separate coil that’s disconnected from any power source.  A variable current delivered to the electromagnetic coil will (by Ampere’s law) induce a variable magnetic field.  The second coil experiences this changing magnetic field and (due to Faraday’s law)  an electric field that ultimately drives a second electric current.   Devices of this sort should be well known to you: they’re called transformers. 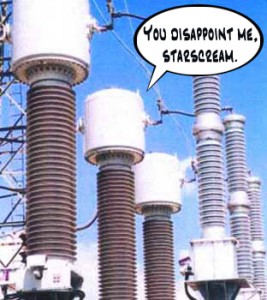 More than meets the eye, indeed.

…A consequence of Gauss’ Law of Magnetism, (not to be confused any of the bajillion other things named for C. F. Gauss.  That guy was a goddamn badass…) which states that the sum of all magnetic field lines entering a closed surface is always equal to the sum of those lines leaving that surface.  This is in stark contrast to electric field lines, which all point away from positive charges and toward negative charges, or to gravitational field lines, which point in the direction of massive objects (at least, in simple cases). Both of these other examples can exert straight lines of force, as well, whereas real magnetic fields have curves. Again, many of you might have already seen an illustration of this principle in high school science classes: 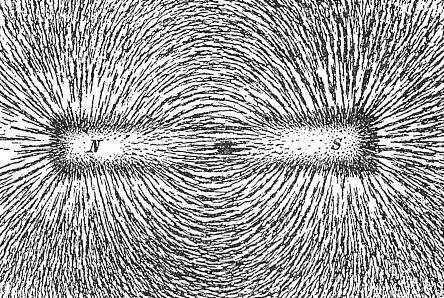 A classic scientific experiment for children, illustrating what it would look like if we put a bar magnet on the floor of a Dickensian child sweatshop.

…whereupon you probably thought, “Wow, my previous experiences of iron filings sure made that demonstration so culturally relevant!”

The three laws mentioned above, Ampere’s Law, Faraday’s Law of Induction and Gauss’ Law for Magnetism–taken together with another of Gauss’ Laws (dude was a bad. ass.)–constitute a classic set of differential equations that underlies the entire fields of classical electrodynamics and optics.  They’re termed Maxwell’s laws, after the Scottish physicist James Clerk Maxwell. This is widely attributed to an arcane pre-E.U. labor regulation requiring that peaceful collaborations between British (Faraday), French (Ampere) and Prussian (Gauss) citizens be overseen by Scotsmen.  It’s largely believed that this law is to blame for Europe’s eventual focus on non-peaceful collaborations.

Maxwell's laws. Top to bottom: Gauss' Law, Gauss' Law for magnetism, Faraday's Law of Induction and Ampere's Law. They may look difficult, but simultaneously satisfying all four is easier than satisfying all of the laws laid out in Deuteronomy.

No, these equations bear Maxwell’s name because he was the one who initially proved that they’re sufficient in describing the electric/magnetic fields present in essentially any scenario.  Given some input data about a system (the distribution of charges, electric current, &ct) one could, in theory, use these equations to derive a general equation that describes the electric and magnetic fields in the system at any point in space and time. In most cases, this calculation is what we in the science biz call “very challenging,” but a simple, peculiar solution pops up if one considers a system containing no charges or currents. Of course, a trivial solution states that the electric and magnetic fields are each zero. But, Maxwell proved that the Laws could also be satisfied by a traveling wave equation, in which an electric field oscillated parallel to one axis, a magnetic field oscillated along a perpendicular axis, and the whole system moved forward along a third, mutually perpendicular axis.  Check out this animation, which I totally made myself. The blue bars indicate the magnetic field lines; red are the electric field lines:

"Bang, bang Maxwell's Light Equations came down on her head! (Do do do doo doo...)"

This phenomenon, a traveling pair of coupled, oscillating  magnetic and electric fields is termed electromagnetic radiation, or more commonly, light. Maxwell proved that the speed at which these fields propagate in a vacuum is, in fact, c, the speed of light in a vacuum. Furthermore, he could prove that this speed is the same irrespective of the observer’s reference frame.  This last result places c as the absolute speed limit in our universe, and lays the groundwork for Einsteinian relativity.

V. Pretty much everything you care about is magnetic

One last little bit before we return to the comfortable world of Comic Book-Themed Summer Blockbusters. In the world of quantum physics, all particles are defined by a series of fundamental characteristics, many of which defy simple explanation. One of these is the quantum spin, so termed less because scientists actually believe that these tiny particles are spinning about their axes, and more because the math describing them is similar to that describing spinning objects. Depending on its value, a particle’s quantum spin number can imbue the particle with a magnetic dipole moment–i.e., can generate a tiny little magnetic field. This might seem like a bit of a physical curio, were it not for that fact that, many atomic nuclei (a prominent example being hydrogen–the most abundant element in the universe, and ~11% the mass of any given water molecule) and electrons each fall into this category.  Which is to say, nearly all of the particles from which you (and all of your surroundings) are made are, in fact, a tiny little magnets. This phenomenon forms the basis for both NMR spectroscopy, and medical MRI, if not a sizable portion of ill-informed beat poetry.

So, now that your knowledge of basic electrodynamics far exceeds that of the average medical student, what can we infer about Magneto’s powers?  Or rather, of his lack thereof?