Let’s start with two observations into Magneto’s behavior, which shall serve to illustrate the physical bases of his powers.  Note that I’m focusing on the incarnation of Magneto that appears in the X-Men film franchise, and less on the myriad variants that have appeared in comic books throughout the years.  This is in part because I assume the former is known to a larger audience, and in part because , after a careful reading of the comic literature, I’ve concluded that the powers granted him are absurd. (*Shifty eyes*) 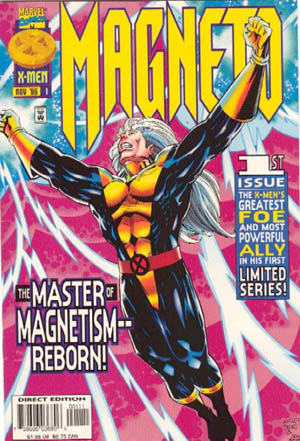 Is it just me, or have this country's Born-again-Masters-of-Magentism taken over our national dialogue? "This country" being Genosha.

1) Magneto can “sense” the presence of magnetic fields, and, as illustrated in the famous prison-escape sequence in X-2, those elements which “respond” to them.  This appears to be an autonomic response: he’s not actively analyzing his surroundings in any sort of conscious way, but instead passively absorbs information through his magnetic “sense” in the way that, say, the thermal-sensing nerves of our skin respond to temperature.

2) Magneto frequently uses his powers to move objects along linear and/or irregular paths.  Or at least, they’re not moving along the curved field lines generated in a simple, static magnetic field (As per Gauss’ Law for Magnetism, see above).  Examples of this phenomenon are ample, and it’s nicely illustrated by each of his character climaxes (Heheheh–Ed.) in X-Men: First Class. In the first of these, Magneto Magneto slowly moves a Nazi coin along a linear path, passing it through Kevin Bacon’s brain. While such linear motion could be possible either by (a) running the projectile along a topologically fixed track (as in mag-lev trains), or (b) by generating a field over a tremendous distance, such that its north and south poles are essentially “at infinity,” neither really seems within his grasp here.  In the second climax (hurhur), his face-off with the assembled American/Russian flotillas, Magneto stops a barrage of missiles and gunfire mid-arc, and thereafter alters the projectiles’ trajectories numerous times. From each of these events, we can infer that Magneto is fully capable not just of creating simple, static magnetic fields, but also complicated fields that vary with time.

Night Vision. Or rather, the ability to “see” pretty much anything at all, even without eyes. As stated on the previous page, a significant fraction of the universe’s matter generates tiny magnetic fields.  Magneto should be able to sense these fields directly, or to sense their response to his application of a larger external field.  Now, honing this trait to the point where he could make out facial expressions in the dark might take a great degree of work, but in the bare minimum he should be able to know where the walls in of a darkened room are.  This would also relate to his…

Atomic “Vision.” Nuclear Magnetic Resonance (NMR) spectroscopy–a technique that exploits the fact that atoms’ magnetic dipoles change based upon their local chemical environment–has become the workhorse application for the determination of chemical compounds‘ structures. Again, turning Erik into a functioning multidimensional NMR apparatus is probably an unreasonable feat to ask, but it should be relatively easy for him to pick out gross details of a compound’s structure (i.e. “This ‘mutation cure’ you’ve developed is rich in aromatic-adjacent alkyne groups, Beast” or, “Look out, Charles! Your wine’s been doped with Indium!”).  Bare minimum: it should be pretty hard to poison his food.

[Author’s side note:magnetic fields can be used in the determination of very complex molecular structures, like those of proteins. This depends on the transfer of magnetization between physically colocalized, though nonbonded, groups–a phenomenon termed the Nuclear Overhauser Effect. I bring this up because “Nuclear Overhauser Effect” is, as far as I can tell, the only scientific term used in this post that doubles as a bitchin’ superhero and/or band name, but which hasn’t been used as such already.]

World’s Greatest Doctor.  Give him a radio gun, and the dude’s a walking MRI.  AND he’s already learned that human life has no intrinsic value.  That’s something you normally pick up during your residency.

Light Manipulation. Maxwell’s laws illustrate that light can be thought of as an oscillating magnetic field (which, owing to Faraday’s Law, brings an oscillating electric field along for the ride).  Magneto should be able to do all sorts of funky stuff with light, either by creating new light, or by tinkering with the light around him.  This would include the entry level..

Light Bursts.  De novo creation of light allows him to do everything from Dazzler-style shenanigans to Superman-style eye-laser beams.

Invisibility. Just move any light that’s headed his way around his body, like a springtime mountain river’s water flows around a discarded oil drum.

Shape-shifting. At least, apparent shape-shifting. Most people only know what you look like based on the light that bounces off you.  SO, Magneto could manipulate that scattered light into portraying something else.  I’d propose this mostly for tactical purposes; given my druthers, I’d be quite happy looking like Michael Fassbender.  Or Ian McKellan.  Or Jordan Stokes.

Holography. If you can manipulate your scattered light into a new image, you could do the same with light originating from/headed towards anywhere else.

[Telekinesis of non-metallic objects? Eh, probably not.  While most everything we commonly think about is a tiny magnet, when placed in an external magnetic field these magnets tend to align themselves in a perfect 50:50 distribution parallel to- and antiparallel (opposed) to- it.  So, if Magneto tried levitate you owing only to your intrinsic magnetism, roughly half of the molecules in your body would align in a direction supporting his lifting field, while half would oppose it.  In NMR we need to apply bursts of radio-frequency light to our samples in order to shift the population balance, and even then, only about 1 in 1,000,000 molecules realigns its orientation…]

Electricity Manipulation. Another fun property of magnetic fields is that they bend the paths of moving charged particles, a phenomenon known as the Lorentz Force. Now, to be fair Magneto does exploit this quite a bit to disrupt electrical equipment. But it also means that electricity is a completely useless weapon against him: any bolt of lightning thrown his way is effectively putty in his hands, and could be deflected or re-directed as he wills.  Electro, you’re useless, here. Storm, lay off the lightning.  Actually, lay off any kind of cloud formation that accumulates charge.  Now that I think of it, it’s probably best if you just sit this one out altogether. Take some time to reevaluate your priorities.

Electricity Manipulation II: Magnetic Boogaloo. You know, the funny thing about charged particles isn’t just that their paths are bent in magnetic fields.  The “bending” of their paths equates to an acceleration–the velocity vector is changing over time, so even if the speed stays unchanged (which it doesn’t have to), the direction is changing.  Charged particles have this funny way of emitting light when they’re accelerated. For electrons, this light typically falls in the spectrum of x-rays.  SO, if  Magneto gains access to some free electrons (either from a failed attempt at hitting him with a lightning bolt… I’m looking your way, Storm… or just from, like, a wall-socket somewhere), it should be trivial for him to turn himself into a Human er…. Mutant Synchotron. Grab some electrons, spin them in a toroidal (read: “doughnut-shaped”) magnetic field, and you’ve got yourself a nearly infinite supply of flesh-searing, DNA-lesion-inducing, x-rays, Mister.  Should be enough to blind anyone in the near vicinity, give cancer to most, boil Colossus alive inside his armor (if that skin’s actually made of steel), and/or use him as a source of Bremsstrahlung radiation. [N.B.: X-rays are themselves electromagnetic waves, so Magneto should be able to make them de novo.  Given an electron source, the synchotron method requires a far lower energy input on his part.  It’s more sustainable–and that’s a buzzword, these days.]

Electricity Manipulation III: This time, it’s personal. I noted above that Faraday’s law is my favorite of the Maxwell equations*.  Hence, it should probably come as no surprise that Magneto’s failure to exploit this law is the most personally disappointing for me.  The Master of Magnetism should, by creating magnetic fields that change over time, also be the Master of Electricity.  Let’s illustrate this with a simple example (Figure 1., below).  Let’s say Magneto’s faced with an humanoid (mutant) enemy so heinous that, as defined by virtually any moral code, it’s to everyone’s collective benefit that this enemy be extinguished.  I’ve come to call this the “Jubilee Problem” (Fig. 1a). Considering that the average human body has an electrical resistance of (depending on the physical integrity of its skin, and whether it’s wet or dry) ~500–100,000 Ω, we can approximate Jubilee as a simple grounded resistor of this value (Fig. 1b).  Now, for humans the average lethal electrical shock has a current, I, of 0.07–0.1 A; by Ohm’s Law we calculate that it would require  an electrical potential difference (voltage) of ~35–20,000 V to push this current through Jubilee.  (Note: as the current is applied, her skin will probably begin to break down, lowering her resistance and making the whole process easier.)  Proper application of Faraday’s Law (Fig. 1c), via the generation of a variable magnetic field (dΦ/dt) with a rate of change of 35–20,000 Wb/s does the trick. 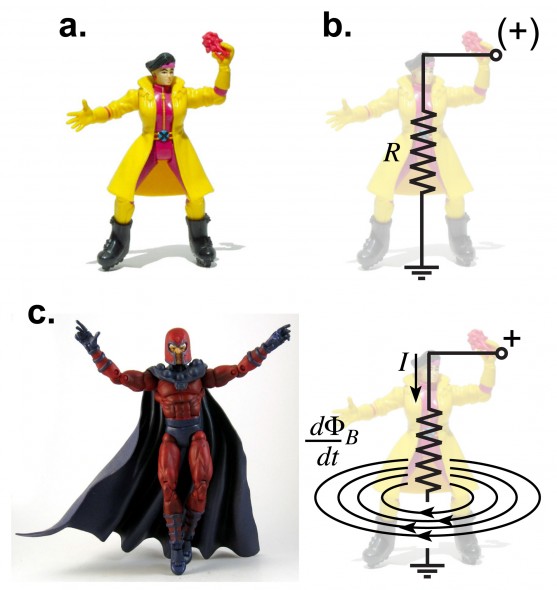 I want to clarify two points: (1) I oppose capital punishment in all of its forms, save for those expressly stated in the findings of The People vs. Scrappy-Doo (1992), for which my lawyer assures me that Jubilee qualifies.  And, (2) the direction of the current, relative to the applied magnetic field, is determined by Lenz’s law.

*-You know you’re a nerd if you’ve ever said, “…is my favorite of the Maxwell equations.”