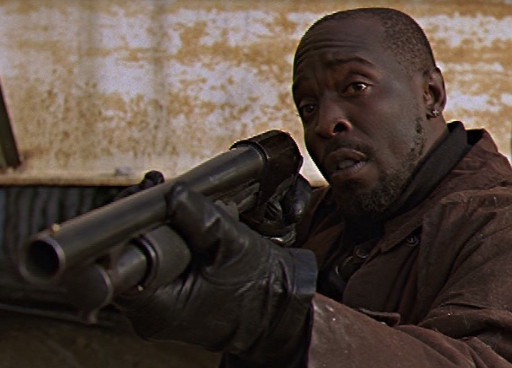 He has a shotgun!  BLAM! And he doesn’t take crap from ANYBODY.

He’s also awesome because he’s a criminal that robs from other criminals.  Like, they think that they’re so hard because they’re breaking the law.  But they’re not harder than Omar!  He straight-up robs them!  Like, all the time.  He’s not afraid of the cops either.  Lots of the people on The Wire act all tough in front of the cops, but you can tell that Omar gives even less of a damn.  So awesome!

I wish I had a shotgun.

The other thing that’s awesome about Omar is how he’s so cool.  When he wants to say “yes,” he doesn’t just say “yes.”  He goes “indeed.”  “Indeed.” Like that.  It’s just so freaking cool.  The rest of The Wire is pretty confusing sometimes, because the people you think are going to be awesome end up not being so awesome, plus I can’t understand the dialogue always, and everyone has to do paperwork.  But Omar doesn’t do paperwork!  He shoots paperwork in the leg and steals its gel-packs.

He also shoots accents in the leg.

The other cool thing about Omar is that he’s gay.  But unlike normal gay people he’s totally badass!  He’s all like — BAM! BAM! STEAL! — and then he like, totally makes out with a guy.  Which is like awesome because, you know, challenging preconceptions and junk.  And like, violence.  Don’t worry, they don’t show too much gay stuff, and there’s a badass lesbian too, so it equals out.  They show more of her.

Anyway, the point is that Omar is awesome.  He has a shotgun, and a code, and he’s gay, and this one time he jumped right out a window and we were all like “Aaaaaah!!” but he didn’t die.  I’m not too clear about the code, actually — they never come right out and explain what it’s supposed to be.  Probably something about not taking any crap from anyone, and having an awesome shotgun and a trenchcoat, and maybe challenging people’s preconceived notions of homosexuality, and having an awesome scar right across your face like that.  They were really lucky when they hired that guy to play Omar that he turned out to have a scar on his face, because otherwise it would have been hard to make him look like that.

I wish I challenged people’s preconceived notions of homosexuality.

Also I wish that Omar was real and lived near me so that we could be friends.  That way everyone would think that I was cool too, because I hang out with Omar from The Wire.

We’d probably get along really well!

11 Comments on “Underthinking It: Omar from the Wire is so Freaking Awesome”