On the surface, “Born This Way” is an impassioned cry for equality, concerned most specifically with gay rights, and more generally with the rights of other marginalized groups such as the “Orient made.”  If you dig a little deeper — well, the song’s politics are pretty much the same, but it’s not quite as straightforward as all that.  The dance that “Born This Way” dances with the patriarchy is a complicated and highly ambivalent one.

The song is a study in oppositions, as is its video.  As is the relationship between the two.  There has always been a disconnect between Lady Gaga’s visual aesthetic, which is self-consciously arty and intellectual, and her music, which is steadfastly trivial.*  So maybe it’s no surprise that the video’s lengthy introduction begins with a rather shocking sound-image disconnect:  in the audio track, we have Bernard Herrmann’s title theme to Vertigo.  And in the visuals, a unicorn in a glowing pink triangle.

One of these things is not like the other.  Hitchcock is a very good filmmaker, and even a subversive one in many ways, but although the hetero-ness of his movies is not exactly normative, it is nonetheless quite stubbornly hetero. (If there’s a more perfect desire-object in all of cinema than Kim Novak in Vertigo, I sort of don’t want to know about it.)  His movies are perverse, but never queer.**   So right off the bat, the idea of a flamboyantly gay Vertigo is kind of a paradox.  Although could we get Todd Haynes on that right away, please, because I mean holy crap right?

The narrative of this sequence, such as it is, concerns a primordial cosmic birth (not long ago, but outside of time and constantly-ongoing), which creates a new race of pleasure-loving, non-judgemental club kids, and the simultaneous creation of a counter-principle described by the narration as “evil.”  Visually, the dominant metaphors are mirrors, birth and mitosis:  one-becoming-two, usually through something messy and biological.

Does any of this have anything to do with the song itself?  Well sort of. 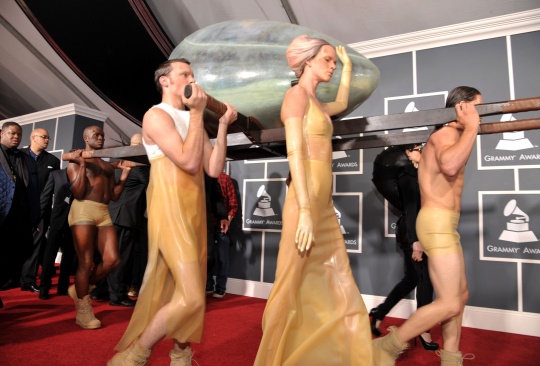 Gaga's latest persona can only be described as "Stargate-chic"

Does being tolerant mean that you have to tolerate intolerance?  Not necessarily.  Saying “the one thing I won’t tolerate is intolerance (of anything other than intolerance)” is a little ironic, I suppose, but it’s no more arbitrary than saying “the one thing I won’t tolerate is unmaximized utility,” or “the ten things I won’t tolerate are 1) having another god before the Lord thy God, 2) taking the Lord’s name in vain, etc. etc.”  That said, the particular version of tolerance that Her Gaga-ness is preaching here is more passive.  The opening crawl claims that the new race — Gaga’s fanbase, we imagine — “bears no prejudice, no judgment, but endless freedom” [emphasis mine].  The words prejudice and judgment are related, but there’s a crucial difference.  Prejudices are decisions you’ve made before you’ve properly weighed the evidence.  Judgments are decisions fully formed.  And Lady Gaga wants no part of either one.

In another post on this site, a few months back, I mentioned the division in left wing ideology between those who want to end patriarchal privilege by extending said privileges to disenfranchised groups, and those who want to overturn the value system itself.  (It’s the difference between “Hey, let’s fund college scholarships for the poor!” and “College just teaches you what the MAN wants you to know!  Let’s demand radical changes to the curriculum!”)  Taking a position that’s against judgment, rather than merely against prejudice, flirts with the more radical position.  But it also exposes one of the inherent problems with it.  If you’re overturning all existing value systems, how do you know your own actions are good ones?  Or “good” ones, whatever that has come to mean in your new utopia.

One way out of the dilemma is to displace the decision onto an authority figure.  Such as, for instance, God.  And why not?  He’s convenient.

It doesn’t matter if you love him, or capital H-i-m
Just put your paws up
‘Cause you were born this way, baby

My mama told me when I was young
We’re all born superstars
She rolled my hair, put my lipstick on
In the glass of her boudoir
“There’s nothin’ wrong with lovin’ who you are”
She said, “‘Cause He made you perfect, babe”
“So hold your head up, girl and you’ll go far,
Listen to me when I say”

Give yourself prudence and love your friends
Subway kid, rejoice the truth
In the religion of the insecure
I must be myself, respect my youth
A different lover is not a sin
Believe capital H-i-m (hey, hey, hey)
I love my life, I love this record and
‘Mi amore vole fe,’ yeah

Don’t be a drag, just be a queen
Whether you’re broke or evergreen
You’re black, white, beige, chola descent
You’re Lebanese, you’re orient
Whether life’s disabilities
Left you outcast, bullied or teased
Rejoice and love yourself today
‘Cause baby, you were born this way

These lyrics have some of the repetitions pruned out, but you get the gist. How do you know that you’re being good when all traditional value systems have been overthrown?  Put your faith in God.  ‘Born this way’ is not talking about homosexuality as a genetic or developmental trait — Him is not Darwin.  Those born this or any other way are so born due to workings of a higher power.  We have no evidence of this, but we must have faith.  Somewhat perversely, Gaga asks that her followers have faith that God’s actual intentions and desires do not align with his writ, or with the teachings of his earthly deputies.

But why bring God into it at all?  Remember, we were just presented with a cosmology where the human race (or at least the worthwhile subset of the human race) is eternally begotten of the great space mother.  Why then, when looking to justify our existence, are we supposed to apply to God rather than Gaga?  One answer would be that she’s just demonstrating suitable humility, but come on, consider the source.  And here’s where the patriarchy, or something like it, comes sneaking back in through the back window. Take a look at that opening passage again:

It doesn’t matter if you love him, or capital H-i-m
Just put your paws up
‘Cause you were born this way, baby

The father (God the Father, of course, big poppa patriarch Himself) is a word, an idea, a law.

My mama told me when I was young
We’re all born superstars
She rolled my hair, put my lipstick on
In the glass of her boudoir

The mother is a location, a surface, a body.

This particular dualistic gender model shows up in all kinds of books, movies, and music, or at the very least in lots of Freud-inflected criticism of books, movies, and music.  The feminine principal is irrational, the seat of the emotions, and within the family unit a source of nurturing and reassurance.  The masculine principal is rational, the seat of thoughts, and within the family unit the source of punishment and restraint.  This is definitely recognizable in “Born This Way,” both in the dense and overwhelming video and in the apparently disposable song.

But although it’s recognizable, it isn’t exact.  God, the traditional punishing figure, is here portrayed as nurturing.  We aren’t paying attention to the legalistic aspects of patriarchy:  no organized religion, no sacred texts.  If those things gave comfort to the people Gaga’s reaching out to here, why would this song need to exist? The image of God in play here is more mystical, in the specifically religious sense of that word.  He does not speak, he makes no commandments.  He simply is, and accepts.  Not so much a big beard in the sky as a kind of free-floating psychic hug.  Regardless of the track you find yourself on, know that He has made it the right one.  Right?

* “Born This Way” is no exception to the rule.  As you can see, reading significance into the lyrics of this one took a certain amount of effort.

*** Or maybe Pedro Almodovar, in which case I guess it exists already.