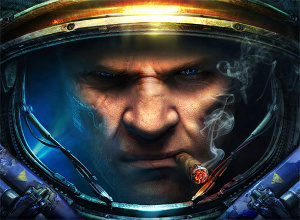 "Hell, it's about time" to call out the Starcraft 2 story for being awful and sexist.

The single-player campaign storyline for one of 2010’s best-selling PC games stands at the intersection between awful writing and awful social politics. It’s a terrible story with terrible things to say that is stupid and offensive. Nobody really likes it, although in the testosterone-filled world of hardcore PC gaming, most people haven’t taken too seriously just how sexist it is.

This isn’t a secret — among the millions of Starcraft fans, the storyline of Starcraft 2 is widely mocked and insulted. It’s bad even for video game stories (which are generally pretty bad) – and it’s bad enough that it’s high time people outside this niche gaming community saw exactly what sort of narrative is being foisted on gamers. Everyone deserves better – we can send a better message, and we can do it by writing a better story. It’s an interesting, niche situation where making the story better would also make it more socially progressive (although this isn’t always the case, or life in general would be a lot simpler).

Starcraft 2 is a tremendously popular multiplayer strategy game, the long-awaited sequel (13 years long-awaited) to the crown jewel of real-time strategy gaming, the game that became the de facto national sport of South Korea, with pro players earning six-figure salaries and multiple television channels showing professional matches all the time. And the single-player missions are generally well-designed and fun, anyway. So, people are still going to play it, even if the single-player storyline that frames the missions is awful. But there is definitely something to be learned from looking at how and why the story is so bad.

Warning – there will be spoilers throughout, along with a rundown of how to go about making a good Starcraft story, and how to expel nova pulses from your Xel’naga penis.

SPOILERS – Beginning at the End

The best way to get a sense might just be to watch the end cinematic, which is by far the worst part of the story, bringing together all the mistakes and missteps it has made along the way. (I’m curious what people’s reactions to it are, with the rest of the game sight-unseen. Let me know in the comments.)

Okay, so what happened here?

The naked girl is Sarah Kerrigan – a main character in the original Starcraft and the central antihero/villain of the Brood War expansion. She is the ascendant ruler of the Zerg, a species of alien monsters that operate through a hive mind and sweep through the universe destroying civilizations, taking over planets, and subsuming the genetic material of other organisms in a quest for perfection. They are known to “infest” their enemies, exerting a sort of biological mind control on them while turning them into monsters. They’re a lot like the bugs in Starship Troopers with a dash of the Borg or Species 8472 from Star Trek.

Sarah Kerrigan is a former human special ops solider (called a “ghost”) with powerful psionic abilities who is left for dead in an act of betrayal by her commander and captured and infested by the Zerg. Once she becomes a Zerg/Human hybrid, a series of events unfolds wherein, rather than being rendered a zombie monster slave, she seizes control of the Zerg, becoming one of the most powerful individuals in the known universe. Here’s the cinematic of her betrayal that they made for Starcraft 2, although the events it portrays actually took place during the original Starcraft. (It’s a mark against Starcraft 2 that its coolest scenes have more to do with the storyline of the original than its own storyline.)

She is also the ex-girlfriend of one of the human heroes (the guy with the space helmet and the mustache in both videos), a space marine named Jim Raynor. A big part of the plot of Brood War (and really what makes Kerrigan’s character interesting and notable), is that Raynor always holds out hope that this ruthless interplanetary tyrant who is killing people by the billions, deep down, still cares about him and wants to be his girlfriend. Of course, he is totally wrong, there are bigger things going on than their relationship, and he is continually disappointed by the fact that no, this woman does not exist as an erotic object, but is in fact a totally legit badass who is playing him like a fiddle because he is dumb and sexist and keeps underestimating her.

The Starcraft 2 betrayal cinematic really hammers in on the new, retconned, damsel-in-distress Kerrigan that has in Starcraft 2 replaced the one we know and love from Starcraft and Brood War. Look how helpless she is without the men in her life, despite her being a special-forces soldier with psionic powers and a personal cloaking device! The sequel is trying its best to recast Kerrigan as a vulnerable innocent the player needs to save, not a powerful rival or somebody you yourself would want to play as in the game (People really like playing as the Zerg – unlike, say, the pre-Voyager Borg, they’re quite sympathetic among players and aren’t always seen as villains. Starcraft 2 doesn’t even have any missions where you get to play as Zerg, a major expected feature from players that Blizzard is holding back to push an expansion next year, for which it will charge the price of a full game, because they can.) 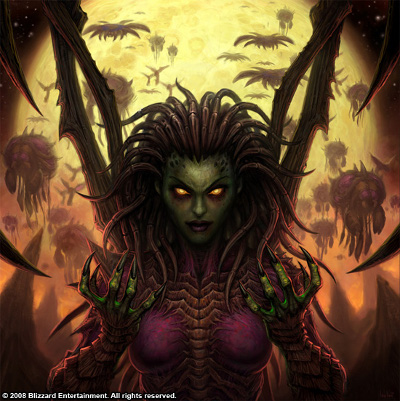 The Queen of Blades, before her debasement in Starcraft 2.

Granted, as a female villain, it’s reasonable, at least at first, to claim that Infested Kerrigan, the self-styled “Queen of Blades” is herself a sexist type. She is, after all, out to kill and dominate humans, and the human soldiers in the game are often, but not exclusively, portrayed as male. And of course, we on Overthinking It are suspicious of female characters who are merely powerful or capable, without being interesting or fully realized. But if you follow the female character flowchart for Sarah Kerrigan, the Queen of Blades does well:

The result from the flowchart?

Prior to the release of Starcraft 2, Sarah Kerrigan had been voted in reader polls at places like IGN and GameSpot as among the top video game villains and the top female video game characters ever. She is powerful, intelligent and ruthless, sexual without being a sex object, part friend, part foe, part girl-next-door, part something else entirely. The site Tom’s Game calls her one of the “most fascinatingly complex and memorable characters of all time.”

Although the story wends through distractions and changes direction awkwardly, the ultimate goal of Starcraft 2: Wings of Liberty is to redomesticate Sarah Kerrigan — to reassemble an ancient patriarchial artifact, which looks like this and floats, erect, when powered up: 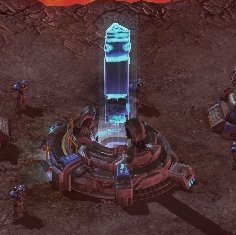 And subdue her, take away her power, and leave her helpless, naked and wanting to love you and be your girlfriend again.

If you’d like, go ahead and watch this clip of the final mission of the game — note how Kerrigan actually emerges from a vagina dentata, how she is impressed and sounds sexually excited by the prospect of this artifact, and how the artifact periodically erupts in a flash of energy that destroys all nearby enemies, but then needs to rest for a little while before it can stand up and erupt again.

I know in the past I have written on this site that one ought not to consider as a creator of art a singular element or an individual creative act as “sexist,” because such labels depend on a full understanding of the real-world consequences of art, which artists can never achieve and should not aspire to. But under this same setup, we as critics are of course free to call it whatever we want, with the understanding that our terming an artistic piece as such is at least partially an act of our own creation and a collective act of the readership — one that is not justified out of the context of real-world, measured material consequence and never wholly found within the art object in isolation.

Furthermore, somebody needs to call out that this whole gross and unnecessary humiliation of one of the coolest characters in the history of video games is misogynistic and disgusting — and that it’s a really dumb goal to put at the end of a Starcraft game in the first place.

Let’s go into why Starcraft even has a storyline, and what that storyline needs to accomplish.