How to Assemble a Starcraft Storyline

Starcraft is a multiplayer strategy game. Players choose one of three races — 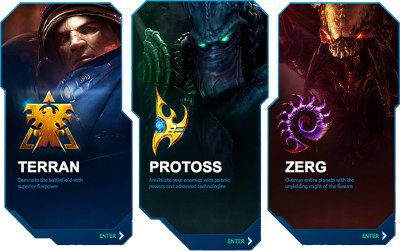 Then the players, either alone or in teams, battle against each other in various configurations over and over again. Terrans fight other Terrans. Zerg fight Protoss. Protoss fight a team of Terran and Zerg. People play as random or play favorite races to get good at over time.

When a game starts, each player has a single base and a bunch of workers, and build first the infrastructure and then the army to destroy the other players’ bases, all while collecting resources and managing an economy and army simultaneously. A Starcraft 2 game lasts about a half an hour most of the time, give or take 20 minutes or so, and each game stands entirely on its own, start to finish, on a map that is developed for its strategic and tactical features and not usually because it is important to the story.

This three-race structure is the key selling point of Starcraft. Each race plays very differently from the other two – much more so in general than in other real-time strategy games – and Blizzard, the gaming company that makes it (A subsidiary of Activision that also makes Warcraft and World of Warcraft, thus the “craft” in the name), continually patches and updates the game to get it as balanced as possible across the three races.

So, what is the main reason to have a story at all? The story is tasked with putting the game in context — adding stakes to the matches, and making each match feel as if it exists in a fictional universe that has some general feel and internal logic.

Why are these races fighting, and why do they fight over and over again in different configurations?

The original Starcraft story and the Brood War expansion’s story do great jobs of answering this question. The Starcraft 2 story bails on this hardcore. It tries to focus on the characters, but it doesn’t do that well either, because the characters are very much informed by why these races are fighting each other over and over again in the first place.

The story of the original Starcraft is pretty complex, but it is built elegantly around the events on one planet, called Chau Sara.

All the possible conflicts among the three races in the game are set up in this one event. The only one left out is the Zerg versus the Zerg. They save that for the Brood War expansion.

It’s really elegant, especially because the different perspectives of the various players sets up the conflict in inevitable ways that don’t paint anyone in particular (except the Zerg, but everybody likes the Zerg anyway) as the villain. So somebody who wants to play either Terran or Protoss gets reassurance from the story that there is some legitimacy to what at least some faction on their side is trying to accomplish.

The story then progresses through a series of complex crosses and double-crosses. The protagonist is nameless — the “player” is assumed to be a high-ranking commander of whatever race he or she is playing. It’s an epic military story with a large cast.

The Starcraft 2 story starts with an analogous event – the Zerg invade a planet called Mar Sara, where Marshall Jim Raynor, a hero of the Zerg wars, lives a relatively quiet life of local law enforcement.

Yeah, that’s a lot fewer bullets. The formative events of the Starcraft 2 storyline, the ones that happen early and get everything going, don’t involve the Protoss at all. They are later shoehorned in with a really thoroughly bullshit series of missions involving having to steal rare gas from holy temples and getting some memory crystal with a bunch of prophesies on it that are apropos of nothing and throw the narrative into crazytown for no reason.

The actual underlying story, which you only really piece together gradually through indirect sources and don’t encounter in any major single events, works like this:

Okay, so none of this really makes any sense, and all of it hinges on the actions of characters who aren’t involved in the actual gameplay. So it’s doing a really really bad job of explaining Why are these races fighting, and why do they fight over and over again in different configurations?

Instead, the writers decide to do what all sci-fi hacks do these days when their story is too goddamned complicated and they can’t figure out how to fix it — they “focus on the characters.”

Which is hogwash, because it’s not like the first Starcraft game didn’t have characters, or that they focus on the characters less before their own stories are bogged down by unresolved complexity, or that stories that have elegant, well-formulated plots communicate them all through impersonal voice-overs.

I have longstanding contempt for “character studies” as forms of dramatic literature. In case you’re not familiar, the Random House Dictionary defines a character study as “a work of fiction in which the delineation of the central character’s personality is more important than the plot.”

I hate this kind of thinking – because it implies that knowing what happens to people and seeing them do stuff important to them detracts from understanding their personalities. I tend to think quite the opposite is true – that the more you learn about what people do and what they have been through the more you get to see their personalities in action, and the more you learn about what underpins the decisions they make and their priorities. I don’t see “character personality” and “plot” as mutually exclusive – or even mutually discouraging – instead, to me, they’ve always seemed to emerge one from the other as characters make their way in whatever world they live in.

So, perhaps somewhat wisely, somebody early on in the writing of the Starcraft 2 story looked at or formulated the lore around the Dark Voice and the hybrids and all that and thought “Wow, this plot is really alienating and doesn’t involve the player at all. We shouldn’t focus on this – we should instead focus on events that involve the player. We should put the player in the shoes of one of the protagonists so the player can identify with what is going on.” This is great, of course.

When they did, this they should have just ditched all that other nonsense and written a story where the things the protagonist does or experiences are the things that matter, and where the major events of the story explain why the Terrans, Protoss and Zerg are fighting each other and amonst themselves all the time in the fictional Koprulu sector. The story at least starts out trying to shot a ground-level view of an incomprehensibly large conflict, and that sort of difference in scope is sometimes cited to try to justify the unimportance of the player’s actions to the world in which they take place, but even in the context of a grant intergalactic war, the disconnection between what a player in Starcraft 2 playing single-player or multiplayer ends of doing and the story that supposedly explains it is so huge that it’s really offputting and self-destructive.

In the single player campaign, the player spends most of his time raising money to fund his army by doing odd jobs for random people or pursuing side quests. There are a bunch of characters who don’t matter who offer credits in exchange for accomplishing specific tasks. When their tasks are done, they depart and they don’t matter for the rest of the game. The player starts out fighting the Dominion and its Emperor Mengsk, but he gives that up and never goes back to it to go get his girlfriend back. So I guess it wasn’t important. The player at the beginning of the game appears to have come to terms with losing Kerrigan, but by the end he’s ranting and raving about it and has undone all his progress. So I guess nothing that happened before mattered.

Oh, and at the end of the story, the player shoots his best friend in the face to save the life of a genocidal tyrant who has killed billions of people. He does it with zero hesitation, despite continually agonizing throughout the course of the game about the difficulty of his relationship with his friend. And despite the fact that his friend’s suit is rigged to kill him if he doesn’t carry out his order, so it’s not like it’s exactly his fault. And despite the fact that his friend has a bulletproof visor that he chooses not to lower for some reason. And this all happens with people aiming guns at the floor of a cave which is full of rocks, so that it’s almost guaranteed that one of them will be injured by a ricochet.