Because the characters in Starcraft 2 don’t do things that matter to the story of Starcraft, the writers force the events to feel like they matter by mapping them to archetypal human conflicts.

In the absence of a better idea and a rush to fill a gap in the story we made ourselved by misidentifying the needs of the project, the grand conflict becomes the predictable old chestnut of binary gender roles. Instead of the Terrans and Zerg fighting each other, which, lest we forget, is a relationship rich with symbolism about the nature of life and authority, we decide instead to have the main point of the story being the necessity that men and women find each other and marry, that men take care of their wives, and that wives submit to their husbands.

It feels resonant. It feels romantic. It feels high-style. It feels like the kind of story people want to watch. It feels easy to do. I get the sense this sort of “sexisming up” of a story happens a lot, when people are tweaking collaborative projects to try to get them to feel right when everything is up shit creek because they’ve been poorly written from the get-go. People tack on the first thing that comes to mind that works, even if it’s socially destructive, cliche and offensive.

But you know what else feels resonant, romantic, high-style and the kind of story people want to watch? The one that involves Terrans, Protoss and Zerg, the one that has the name that is on the cover of the box of the damned thing. The story of Starcraft. People around the world have been reenacting the story of Starcraft, every day, for hours, for 13 years! Clearly there is something there that people connect with, and the writers would be wise to figure out what that is rather then de-emphasizing it and replacing it with their own petty prejudices.

Look, if we wanted to be spending our time obsessing about sexual relationships and gender roles in our households, we wouldn’t be playing Starcraft!

This may seem like an anti-nerd joke, and to a degree it is, but there’s something important here, too. Fictions so often seem to overemphasize the importance of sex – like sex is the only thing people look for – the only thing worth looking for. Sex plots, love plots, plots about getting married get tacked on to so many projects in lazy ways because there is a lack of breadth in scope on the human experience – because the writers, editors or producers assume people are just that simple. Well, people are not.

Adding sex to a story in a lazy or contemptuous way more often than not leads to adding sexism, as the contempt for the subject matter translates into contempt for women and progressive gender identity in general.

The saddest part of all of this is that after playing through the story, it seems for some reason the people who wrote it didn’t think Starcraft was good enough. They didn’t think Starcraft was worth it. Which makes them some of the only people familiar with the franchise who think it is that uninteresting. Too many people have put too much into this franchise for too long to let people who don’t like it write its story, and gamers already deal with too much negative reinforcement around relationships and women to have it dominate a property where it contributes nothing and is not accomplishing a basic function.

Here’s hoping Heart of the Swarm is better, and that in the next expansion we see a return to form from the Queen of Blades. 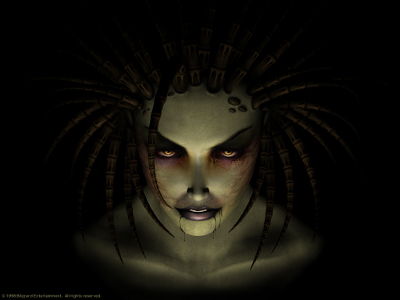