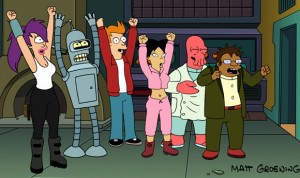 Take THAT, grim specter of death!

I feel that we, as a collection of overthinkers (and what’s more, a collection of giant dorks) have been a little remiss in not adressing the Futurama situation more fully before now.  Just to refresh everyone’s memory:  Futurama was a show that ran on Fox from 1999 to 2003, which combined the humor of cruelty with brilliant, affectionate parodies of classic science fiction setups.  There were plenty of dorky sight gags (like Olde Fortran Malt Liquor) and moments of random goofiness (“All hail the Hypno-Toad!”), but there was also a rigorously worked out sense of continuity, and the writers took a perverse glee in playing on the viewer’s heartstrings every now and again.  It was widely beloved fervently beloved by its all too limited audience.

After its cancellation, Futurama lurched into a strange half-life, with four direct to DVD movies.  These were less fervently beloved, but certainly had their moments.  And then, in 2010, we started getting brand spanking new episodes of the series on Comedy Central.  The rebooted show is still finding its feet, to be sure, but for the most part the new episodes blend right in with the old episodes.  Which is great!  If Overthinking It was a review site, we could pretty much call it a day.  But we’re not, so we can’t, and really, the goodness of the new episodes was never the interesting question (or at least not the only interesting question).  Personally, I’m more interested in their ontological status.

Whenever a defunct franchise is resuscitated, there’s always a lingering doubt as to whether it’s really the same franchise, as opposed to some shoddy impostor. This also seems to be what interests the show’s own writers.  In the opening minutes of “Rebirth,” the first of the new episodes, we learn that the entire crew (bar Fry and the Professor) have been horribly killed in a spaceship collision.  The professor revives them in a giant vat of stem cells.  This is meant to be unproblematic, in-show:  they were dead, now they’re alive.  But Leela doesn’t make it, leading (through a series of wacky adventures) to her consciousness being duplicated and downloaded into a robot body.  This is problematic.  Is the robot Leela?  If not, who is she/it?  Does Fry love her?  If not, who does he love?  And so on.

True to form, the writers are exploring a classic speculative-fiction premise.  I don’t know where it originates, but I came across it first in William Gibson’s Count Zero and (especially) Mona Lisa Overdrive. Gibson not being one for sugar-coated happy endings, we’re told in these books that you can not cheat death this way.  If you copy yourself into a computer, the copy may live on, but it’s not you:  you are still dead, and anyone who thinks it is you is deluded.  Gibson underlines this point by having his AI duplicates act all weird and inhuman, but even without that touch I find his logic convincing (which is perhaps why, for me, the ending of Avatar feels like a creepy Twilight-Zone scenario).

While it would be possible to see this as just another sci-fi plot (turned on its head, as Futurama’s plots so often are, by the third act reveal that Fry, too, is a robot duplicate), it’s also a fairly on-the-nose allegory for the show itself.  It looks like Futurama:  the animation’s the same as it ever was.  It quacks like Futurama:  they brought back the original voice actors.  Is it Futurama?  I’m not so sure.  Futurama… that show died (or ended, rather).  The movies, while nice, never felt like the show.  The new episodes come closer, but at least so far I still find myself holding them apart in my mind as something which is like the show, but not really the show.  It’s not that I don’t accept them as canon, exactly, but it’s something like that.  Futurama to me had a particular beginning, middle, and end, and these new episodes are not part of that structure.  They’re a replacement – an eerily good replacement, perhaps, but a replacement nonetheless.

Personally, I’m a little disappointed that the writers didn’t stick to their guns and have Fry and Leela stay robots for the duration of the whole new series.  There’s a lot of comedic potential in coming to terms with life as a robot, plus I think it would have been hilarious if the Planet Express break room was updated to include old-school Leela’s comatose body stashed away in a life-support bed in the corner.  (I may be a little twisted.)  But more to the point, bringing back the biological versions of each character just in time for the final bow feels both self-congratulatory and sycophantic:  “See guys, it IS exactly the same show you know and love!  Nothing has changed!  Nothing!” This same eager-to-please quality to the writing, interestingly enough, is what always kept the movies from really working for me (I love Hedonism-bot as much as the next guy, but he does not need to be showing up this often!), and it’s not something that we saw in the writing of the original show at all.  Old-school Futurama, lest we forget, was content to end one episode with an extended montage of the hero’s dog dying of loneliness and old age.  So maybe the rebooted show has changed after all.  Futurama has shown us that it can still be funny, whether it can still be brutal remains to be seen. Without brutality, it will never again be truly great.

But in the mean time, new-school Futurama will serve.  As Robo-Fry puts it, late in the episode, “I love Leela.  Any Leela.”

6 Comments on “Ramas of Future Past”