Being not, astonishingly, a suggestion for the world’s best karaoke song, but rather a discussion of Prince of Persia:  The Sands of Time.  [WARNING:  I spoil the heck out of it.  I also get quite a bit more political than is typically “allowed” around these parts.  Read on at your own risk.] 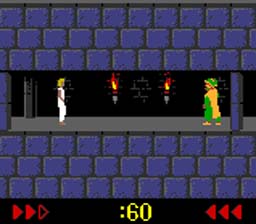 I played the heck out of this on Game Boy back in the day.

There is not necessarily a lot here to overthink.  If I was just going to think it, I’d probably say something about how Jake Gyllenhaal is a lot less embarrassing and more believable as an action star than I was expecting.  That Gemma Arterton sounds like she’s doing a Katherine Hepburn impression, but it kind of works anyway.  That Jeff from Coupling is a good actor, and his chemistry with Gyllenhaal was impressive, but that I could not stop expecting him to start saying “gusset.” That the film, while enjoyable for most of its running time, was overstuffed, littered with plot holes (some of them gaping), and not “good” by most meaningful standards.  And that Ben Kingsley needs to take a moment to review the Evil Overlord List, or possibly add to it.

But in Overthinking It terms, the thing to pay attention to is the heavy handed political subtext.  As the film opens, the Persian army is debating whether to invade the holy city Alamut.  Intelligence indicates that Alamut has the ability to produce powerful, high-tech weapons (i.e. really nice swords), and plans to sell them to rogue states and terrorist groups.  One quick and brutal conquest later, the victorious Persian army marches through the streets of Alamut.  Unfortunately, no cache of weapons is found.  The Persian King is appalled.  We need to find those weapons!  Without them, our invasion becomes a war of aggression!  We’ll never conquer the people’s hearts and minds!  Indeed, later, we learn that the war wasn’t about weapons at all.  Rather, it’s about a natural resource, buried deep within the earth below Alamut, which gives those who control it the ability to travel back in time.  So right up to the last four words there, this is a pitch-perfect allegory for the Iraq war (or at least the liberal critique thereof).  This in itself may not be interesting, but it is interesting that in the past three years we have had two mega-budgeted sword & sandals action spectaculars that serve as obvious allegories for the Iraq war – the other of course being 300 – and both of these place people from the Middle East in the conquering army role.  And do note that the evilest of the evil in this film are the non-union equivalent of the Hashashin, who were of course a Muslim group, while the Persians themselves are ambiguously Zoroastrian.  (I am not blind to the paratextual irony of having the Prince of Persia square off against the Assassins, but the religious subtext is also present, I think.)

Reimagining the invadees as invaders is not so strange, in and of itself.  We’ve done it before with other wars, after all:  witness Red Dawn.  Or take this interesting tidbit, from the preface to Vladimir Lenin’s Imperialism: “In order to show the reader, in a guise acceptable to the censors, how shamelessly untruthful the capitalists… are on the question of annexations, in order to show how shamelessly they screen the annexations of their capitalists, I was forced to quote as an example — Japan!  The careful reader will easily substitute Russia for Japan, and Finland, Poland, Courland, the Ukraine, Khiva, Bokhara, Estonia or other regions peopled by non-Great Russians, for Korea.”  Lenin was dealing with actual legal censors, the writers of Prince of Persia and 300 were dealing with subtler censors of market pressure and the mind, but it’s still basically the same dodge.

Interpreted in this light, the film’s ending is creepy, if oddly poignant.  Gyllenhaal manages to turn back the clock to the point where he first touches the dagger – the point, that is, immediately after his Persian army overruns the Alamutian defenses.  Armed with the knowledge that the intelligence used to justify the war was flawed, he rushes to put things right by restoring the Alamutian princess to power, stopping briefly along the way to defeat the Dick Cheney analogue in a scimitar fight.  The interesting thing about this is that he doesn’t go back to before the start of the war.  Rather, he goes back to try to fix its aftermath.  This is probably mostly for the sake of plot mechanics, but lets ride this puppy out:  Gyllenhaal’s fix for the mess created by the invasion is to put the deposed head of state right back in charge.  That is, to put Saddam Hussein right back in charge.  That is, essentially to end Gulf War II the same way we ended Gulf War I.

The film is not meant to have a political point of view in this sense, of course:  it’s not advocating anything outside of its own narrative.  Restoring Gemma Arterton to the throne is a good thing because she’s meant to be a wonderful ruler, and this is not intended as an endorsement of Saddam’s leadership skills.  The allegory simply isn’t that robust. Still, like I said:  there’s something poignant about the film’s belief – or perhaps better, its desire to believe – that the people’s hearts and minds could be won simply by restoring the status quo, and that the bad intelligence about weapons was the ONLY reason for starting that war, rather than the straw that broke the camel’s back.  And again, like I said:  there’s something deeply creepy about this abdication of responsibility.  Most people I’ve talked to about the current state of affairs in Iraq take on a mournful “you break it, you bought it,” kind of attitude.  The end of the Sands of Time lets us live out the fantasy (however remotely, however transformed) of unbreaking it:  of simply waving a magic wand and making the war go away, not by ending it and dealing with the consequences, but by preventing it from ever having happened, and then washing our hands of the whole mess.  A nice thought, certainly, but not the way the world works.  There are no do-overs in geopolitics.  At best, we can make like one of Alfred Molina’s ostriches:  bury our heads in the sand, and scream “La la la I can’t hear you!” (or make quacking sounds – whatever it is that ostriches do) until it blows over or everyone involved is dead, whichever comes first.

Painted on and overly-schematic as its political subtext is, Prince of Persia reminds us that there is a very real war going on.  And in this, it provides a valuable service.   But it may not be doing itself any favors.  The head-in-the-sand approach can be awfully attractive at times.  And Prince of Persia is currently getting clobbered at the box office by Shrek Forever After.

4 Comments on “If I Could Turn Back Time”