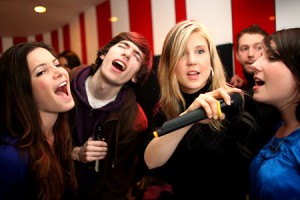 Note: singers depicted in the picture are not the Overthinkers.

While we’re not busy applying sociological analysis to Gossip Girl or discovering the Wagnerian myth behind Iron Man 2, the Overthinkers love to unwind with a rousing karaoke session. Not surprisingly, we take it pretty seriously. We make sure to bring new material to each session, we practice, and we perform with gusto in order to make the experience enjoyable not just from a personal, “I’m singing this song I love” perspective, but also from an entertainment, “I’m brining enjoyment to the people listening to me” perspective.

We think we’re pretty good at karaoke, but it’s only partly due to our abilities to carry a tune. The non-singing performative aspects (dancing, gesticulating, etc.) are important as well, but perhaps the single most important factor in our karaoke success is song selection. Anyone who’s ever been to karaoke knows that there are some songs that work great, and some that just bomb, no matter how talented the singer is. “Sweet Child ‘O Mine” is almost always a bad choice. “Bohemian Rhapsody” almost never fails to bring the house down.

We have an intuitive understanding of why some songs work and some don’t–too long, too repetitive, too hard to sing or rap–and that mostly serves us well. However, I wasn’t content with this. Surely there must be a way to advance beyond these vague ideas about karaoke song choice. If only there were some mathematical formula for determining karaoke song quality, then singers everywhere would have a consistent and reliable methodology for choosing songs well and avoiding the embarassment of stinking up the place with “Yellow Submarine.”

And you know what else we could do? We could find an answer to that most elusive question in karaoke studies:

“What is the best karaoke song of all time?”

Well, without boasting too much, I think I’ve cracked the code. Read on to discover the groundbreaking Karaoke Formula… 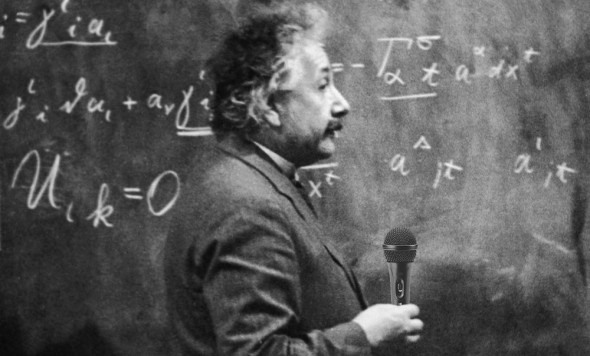 Fact: Einstein owned the mic with his rendition of "Happy Days Are Here Again."

…But before we get to the formula itself, let’s ground ourselves with some basic guiding principals in karaoke song selection that drive this formula:

Now that we’ve gotten the more obvious things out of the way, here are some more subtle factors:

OK. Now that we’ve gotten the basic principles out there, let’s look at the formula itself.

38 Comments on “The Karaoke Quotient”