Ah, spring: that sublime season when a young man’s fancy lightly turns to thoughts of love. And car chases. Ideally, love paired with car chases. As in, “Oh no, the hot chick I love is about to be eaten by some CGI creature, and the only way I can save her is by stealing this Ferrari!”

Lights, camera, lots and lots of action! Winners after the jump.

Two weeks ago, I challenged you to deliver your own versions of 10 classic Hollywood taglines. And just like last year, you did not disappoint. Here are some of my favorites from every category. (And no fair peeking ahead to the grand prize winners.)

In a world where hamburgers are gold, only one man has the balls to chicken out. Sanders: The Movie

I’m sure Trevor hasn’t seen it, but Jimmy Kimmel Live actually did a trailer for this movie last year, starring Mel Gibson as The Colonel:

Nice work by Mel, but it would have been even better with Trevor’s tagline. 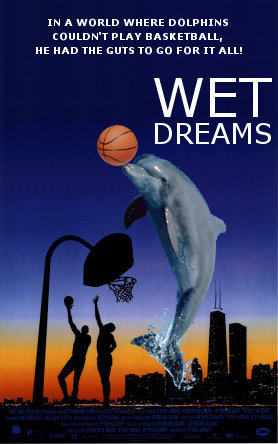 Honorable mention goes to Mark. No, not the Asian Mark who writes for this website. This is an entirely different Mark who Photoshopped up a mighty fine poster for Wet Dreams (which is not what you think it is). I know the idea of a dolphin playing basketball seems far-fetched, but so did the idea of a golden retriever playing baseball, and that was an actual, real movie.

Will somebody please explain to me how a dog swings a bat? Or where a dog’s strike zone is? No, I will not rent the movie, thank you very much.

Sometimes the best entries are the ones that use the prompt in unexpected ways. Maybe it’s the fact that I just saw The Great Muppet Caper last weekend, but I have to tip my hat to Tom:

I want to see that movie. How did this man become obsessed with counting? How can he make thunder peel with the power of his words? And, as Peter Griffin once wondered, does he survive on human blood?

Side note: I’ve always wanted to create a trailer for a movie where Bert frames the Count for a crime he didn’t commit, and years later he escapes from prison and seeks revenge by taking on a new identity. Guess what it’s called.

Two girls. One cup. For the Williams sisters, Deuce is wild. The 2001 US Open Championship

It’s not often you see a tagline with a twist ending. Admit it: you thought that was going somewhere else after the first two sentences.

This prompt really inspired all the Science nerds:

Tom: The strong nuclear force brought them together. CERN tore them apart. Atom and Eve

But my favorite comes from Alexandra, who really outdid herself in this contest. Not only did she attempt nearly every cliche, she actually wrote up a little elevator pitch for each of her entries:

Divorce brought them together. Only marriage could tear them apart. Shared Assets

Rom-com about divorce lawyers (Sarah Jessica Parker and Matt Damon) who are having an on-again-off-again affair until Sarah gets married and moves to Hawaii, where Matt must follow her and win her back and also secure the position as her soon-to-be-ex-husband’s divorce attorney.

Dead serious, this could be a movie. It’s kind of like Intolerable Cruelty, but probably stronger because the woman is another lawyer, and not just a gold-digger. However, I’d advise against SJP. She’s not going to pull in the young male demo. You cast Katherine Heigl or Charlize Theron, you’ve got a package that can play across three quadrants.

Anyway, great job Alexandra! Somebody get this girl a desk at William Morris!

Remember Mark, the guy who brought us the dunking dolphin? He’s about to make you feel a little guilty for finding this amusing:

To hide his family from the Nazis, he must first sell some stuff to make room in the attic.  Craig’s List

I am totally imagining Liam Neeson crying out, “If I hadn’t asked so much for the Lifecycle, I could have saved two more people! I never use that thing anyway!”

To take a ride, she must be at least. This. Tall.  Coaster

Even better is his tagline for the sequel:

She hasn’t gotten any shorter… neither have the odds.

Tom, what exactly is going on in this movie? I’m gonna guess Die Hard at a theme park, right? I’m in.

As Fenzel pointed out, this is the Hollywood version of hendiatris, or tripartite motto. Basically, a list of three things using similar constructions. Keith Fraser wins this one in my book:

I see this as a series of short sketches. The joke is that these guys are superheroes who have all sorts of stipulations about how and when they will fight evil. In each episode, the Mayor calls them to report some villain leveling downtown, and the heroes always have some reason they won’t help. “Oh, the monster is more than 15 feet tall? Okay, you’re gonna have to fax over a form to the local before we’re allowed to intervene. But none of us are allowed to reload the fax machine’s paper tray. That’s UltraLad’s job, and he’s not in until Tuesday.” Every sketch ends with the same stock shot of the city exploding.

Honorable mention goes to the unstoppable copywriting machine known as Mark, who has two entries for this one that I must share:

See no evil. Hear no evil. Speak no evil…or ELSE!   Helen Killer

When I visualize this, she’s trying really hard to kill people, but she totally can’t, because she’s blind and deaf. She just stabs the hell out of the wall. 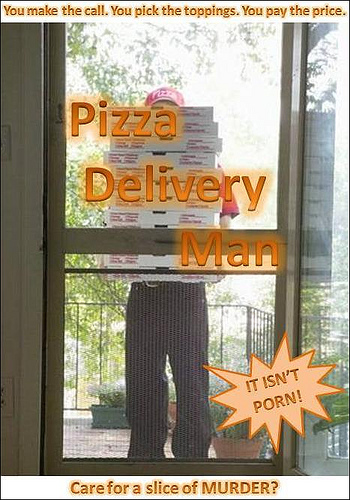 This seems as good a time as any to tip my cap to Shawn Pitre, who wrote a full slate of ten cliches, all about Magic: The Gathering. For instance:

Emrakul means never having to say “Your Turn.”  The Beatdown

But my favorite for this one was by Chris:

Charades means never having to say anything.  Sounds Like

Nicely done. The Overthinkers love to play charades when we see each other, and our games often turn into brutal wars of attrition. My team once received the following song lyric as a clue: “The RZA, the GZA, Ol Dirty Bastard, Inspectah Deck, U-God, Ghostface Killah, the Method Man, Raekwon the Chef, the Masta Killa, Raw Desire, LeVon, Power Cipher…”

I think it went on for a while. (Both the clue and the game.)

Trevor gave me a warm and fuzzy 80s flashback with this one:

He’s a hair removal waxer. She’s Sasquatch’s daughter. Can you say “hairy situation?” Harry and the Hendersons 2: Meet the Bigfoots

I want this movie to be real, if only because John Lithgow deserves more work. He was great in Third Rock, great in Harry and the Hendersons, and great beating the crap out of Stallone in Cliffhanger. That’s range, people.

Honorable mention to Chris, if only for the painfully cute image:

He’s a cactus. She’s a balloon. Sometimes love is a prickly thing.  Love is All You Needles

This is a Pixar animated short waiting to happen.

One of our most loyal readers, Gab, wrote this gem:

It is, she explains, a sequel to the terrible horror flick. But I think it could be a sequel to the even worse family tearjerker, in which Michael Keaton is reincarnated as a snowman so he can spend time with his grieving son. Instead of the Nixon snowman killing people, he could be penning a series of articles for the National Review, trying desperately to rehabilitate his icy image.

This is not just a tagline, it’s a pretty good encapsulation of the Nicene Creed. There was some speculation in the comments that Jesus Movie would make a pretty good parody. But I think The Life of Brian would be hard to approach, let alone top.

One more that made me smile, from Chris:

Possible title for the sequel: Mega Snuggie vs Giant Slanket.

Keith Fraser intrigued me with this one:

Vlad was just an average vampire. Until one day he fed on the wrong teenage girl.   Twihard With A Vengeance

I see this as being a genre parody (alternate title: Not Another Vampire Movie) in which real vampires are increasingly ticked off at being overhyped, stereotyped, and actively pursued by the nubile virgins they used to enjoy hunting down.

And those of you who still remember your SAT math might enjoy another pitch from Alexandra:

Yes, she’s got a plot figured out.

A serial killer is convinced it’s his job to keep the average life expectancy consistent. As retired Detective Mark “Gruff” Oldman (Clint Eastwood) approaches the fatal age, he must go undercover to catch the killer. Also starring Diane Lane, as the lady detective who must deal with Gruff Oldman.

Gab’s got another good one for this:

Just when you thought it was a good day to die. Worf Drive

I’m seeing this as a quirky, indie comedy, a la Little Miss Sunshine, about a group of Starfleet officers who take their depressed Klingon friend on a roadtrip. Bittersweet hilarity ensues.

Honorable mention goes to two entries that go literal on us:

Tom: Just when you thought it was time to boil… Watched Pot

Keith Fraser: Just when you thought it was ten to three. The Day the Clocks All Ran Slow

And now, the Clichemagging reaches its climax: it’s time to reveal our grand prize winners. Admittedly, there were not a lot of Photoshops submitted. But even if there had been, rtpoe would probably have won with this beaut. 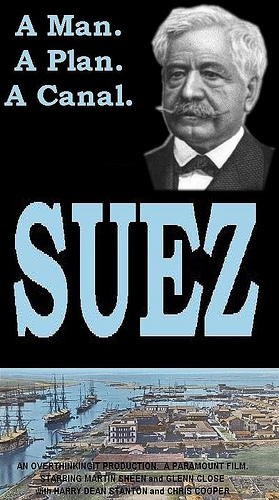 First of all, I love that he doesn’t go the obvious route and finish the palindrome. That somehow makes it more Hollywood, like setting a movie in Hong Kong and calling it The Karate Kid. I also love the somehow-plausible cast. I could see this as classy Oscar-bait, a lush period piece about obsession and ambition. There Will Be Blood, in Egypt. Strong work, rtpoe.

And finally, my favorite cliche of all. Mark submitted a bunch of great ones, but this is a stroke of genius:

She’s an illiterate incest-survivor from the inner city. He’s an obsessive/compulsive cave-dweller. The fires of Mount Doom couldn’t tear them apart.   My Precious: Based On the Novel “Push” by J.R.R. Tolkien

Internet, I beg you: somebody make me a poster for this. I want to see these two locked in a tender embrace, staring deeply into each other’s eyes. Bonus points if you can depict Mo’Nique atop one of those winged creatures the Nazgul ride around on. This has to happen.

Rtpoe and Mark, you have won yourselves the right to commission an Overthinking It post. Come up with a topic, and I will do my best to beat it straight into the ground. I’ll be emailing you soon to set that up.

Everyone else, thanks so much for contributing. We know you have a choice when it comes to procrastination, and we appreciate you choosing OTI for your time-wasting needs.

Squin has made me a happy man. 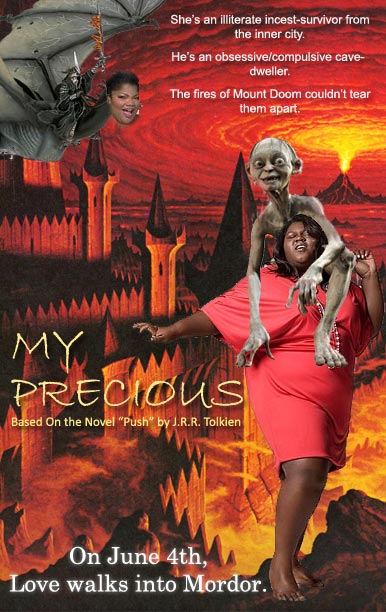 Just breathtaking. I think I found my new wallpaper. And I don’t mean on my computer desktop; I mean actual wallpaper for my apartment.

17 Comments on “Clichemageddon 2: The Winners”