[Every now and again, when we are on the verge of vomiting up the crap Hollywood is shoveling down our throats, this weekly series by Matthew Belinkie reminds us to keep things in perspective. —Ed.] 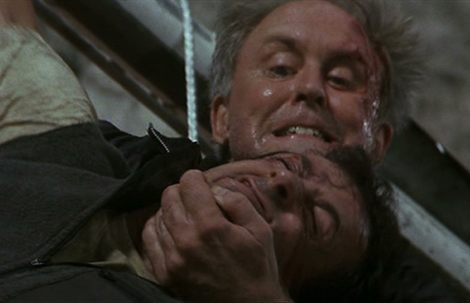 Lithgow looks precisely like the Harvard-educated Fullbright scholar that he is. And Stallone looks exactly like the HGH-abetted manimal that he is. Bottom line: if Ivan Drago couldn’t do it, there’s no way the bad guy from Footloose is going to defeat the Italian Stallion.

First, a little setup: Lithgow is flying a helicopter. Stallone tethers it to a chain ladder running up the side of a cliff. Unfortunately, he himself is clinging to this ladder. The helicopter gets tangled up and stalls out, crashing into the cliffside. It hangs upside down from the (very very strong) ladder. Stallone falls off the ladder and grabs on to one of the coptor’s skids. And since it’s upside down, he’s hanging right next to the cockpit door. (I’m sorry if that scenario is hard to picture. I assure you, watching the movie may not make it any clearer.)

The fight begins with Lithgow jumping out of the copter and grabbing onto Stallone. Not a smart move really, since if Stallone lets go, they’ll both fall to certain death. But his grip holds, and Lithgow climbs up him onto the copter’s bottom (now its top). He begins kicking Stallone’s hands. Stallone grabs his foot and knocks him down long enough to pull himself up and try and climb up the rock. Lithgow punches him in the back, drags him down onto the copter, and gets him into a choke hold. That’s when Stallone makes the pivotal move in the fight: he bites Lithgow’s arm. Really. I somehow feel like a serious action star should never bite. But then again, a serious action star shouldn’t let this man put him in a sleeper hold.

After that, it’s all Sly. He staddles Lithgow and pounds on his face for a while. Then he tosses Lithgow back into the copter, with the bon mot: “Remember shithead! Keep your arms and legs in the vehicle at all times!” Finally, he grabs onto the cliff just as the amazing ladder finally gives way, and the copter falls to its requisite fiery demise.

Sylvester Stallone and John Lithgow have both been nominated for two Academy Awards.