My oh my, it’s been a while.  But here I am with another installment, which will be spread across two days, because I couldn’t get the whole thing polished in time and these posts tend to be way too long anyway.  For the record, if you’ve been following this series of posts from the beginning, you’ve read just over sixteen thousand words of my natterings about a decade-old TV series, which works out to well over fifty typewritten pages.  Almost a hundred pages, if you use Courier New with wide margins and jigger the kerning.

Before getting to the episodes on Disc 4, let’s take a quick look back over the series so far, which is just, just over halfway done.  (I’m cutting this off after Jupiter Jazz, the literal halfway point.) 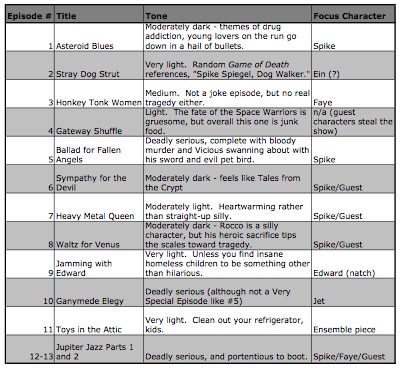 Note that when I say focus character, I mean more than just who gets the most screen time.  I say that the episode is focused on a character if we derive significant insights into their motivations or backstory, or if it plays an important part in their character arc.  So while Spike doesn’t do a whole lot more in Waltz for Venus than he does in Gateway Shuffle, his stepping in as a mentor for the hapless Rocco is a really important moment for his character development.

The balance of “light” and “dark” episodes is pretty interesting.  But more significant I think is the way that we get exactly one episode dedicated to each of the main characters other than Spike.  The series thus far is tidy.  It’s not mechanistic or anything, but you could definitely imagine the writing team sitting down to work out this general structure ahead of time (even if, as some of our more anime-savvy commenters have pointed out, that almost certainly didn’t happen).  You could also make a much, much more complicated version of this chart that also includes thematic links between the episodes, like the music boxes that show up in 1, 5, 8, and 12/13, or the big food sequences in 1, 4, and 11, and so on.  But I’m not totally sure that there would be anything to gain from this other than the “Okay, it’s all a dense tapestry” factor.

Anyway, the second half of the series is, for want of a better word, a lot sloppier.  I’m still not quite sure what to make of that.  The individual episodes are still fun, but the stakes just aren’t as high, and the connections between them are a little harder to figure out.  If one were feeling uncharitable, one could suggest that the show had jumped the shark. That the writers had run out of good ideas, and were simply spinning their wheels.  One could also blame pressure from the network censors:  Cowboy Bebop was very nearly cancelled after thirteen episodes because of concerns over adult themes and situations.  And The second half of the series is a lot more, uh, laid back.  Most of the time.  But plausible as they seem, I think that both of these explanations are mistaken — that there’s more to these later episodes than meets the eye.

One thing to note:  in the first half of the series, Jet, Faye, and Ed each got exactly one episode dedicated to their antics.  In the second half – well, I haven’t actually finished it yet.  But on this disc alone, Jet and Ed get an episode each, and Faye gets two.  And I guess Spike just takes a cigarette break, or practices Jeet Kune Do, or something.

This disc leads off with a Faye episode, in which we finally find out the truth behind her backstory.  Sort of.

The facts – presented in flashback and dream sequence over the first half of the episode – are these:  in 2019, a young woman was put into cryogenic storage.  When she woke up fifty-four years later (a couple of years before the show proper begins), she had no recollection of her identity or why she was frozen in the first place.  The doctors that thawed her out couldn’t help much, although they were able to give her a name – Faye Valentine – and to slap her with a 300,000,000 medical bill.  Harsh!

(Longtime readers will of course remember that Faye’s debts were brought up in the first episode she appeared in.  At the time, we were given to understand that she owed money to the mafia.  Turns out it was the Blue Cross Blue Shield.  Make of that what you will.)

So as you can see, we don’t get to learn much about Faye’s past at all.  In fact, as we’ll learn later on, even these minimal “facts” are mostly fabrications:  the doctors were running a scam where they pulled random bodies out of cold sleep and stuck them for massive medical fees, and the name “Faye Valentine” was assigned more or less at random.  In a typical Cowboy Bebop move, the “Faye Valentine Origin Story” episode turns out to be about how Faye Valentine doesn’t really have an origin.

However.  If we accept the idea that our personalities are largely the product of our past experiences (which is generally accepted in life, but relatively uncommon in fiction, which tends to posit some sort of essential, transcendental “selfness”), then yeah, this is an origin story.  Faye comes out of the freezer a blank slate, and her current personality is shaped by what happens to her afterwards.  Which means that most of her personality comes from a whirlwind romance with this guy, Whitney Hagas Matsumoto, who Faye refers to as “the guy with the thin eyebrows.” 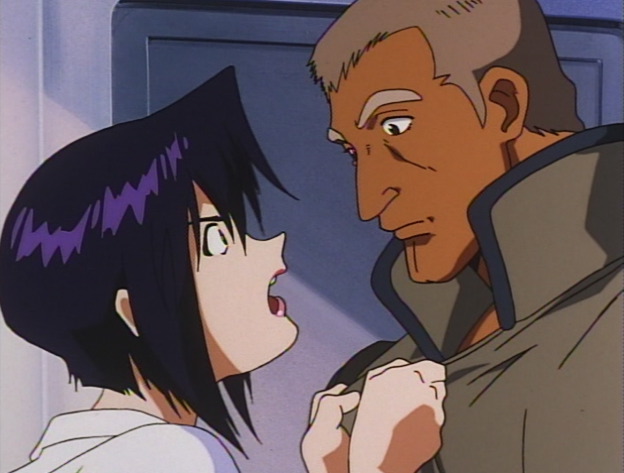 The eyebrows, they... do not look so thin. Incidentally, the writer of this episode has admitted that he told the art department to make Whitney look as much like George Clooney as possible.

Whitney is a lawyer assigned to Faye by her medical insurance company to help her fight the massive lawsuit that they’re slapping her with.  I don’t think you actually get an attorney appointed to you in a civil suit.  I certainly don’t think the insurance company that is suing you would have to provide you with one.  But hey, maybe the legal system has changed with the times.   (Plus – spoiler alert – it turns out to be a fraud.) Anyway, Whitney also has the job of getting Faye acclimated to life in the 2070s.   This leads to a cute little scene here where he tests Faye’s memory by having her identify various objects in the room 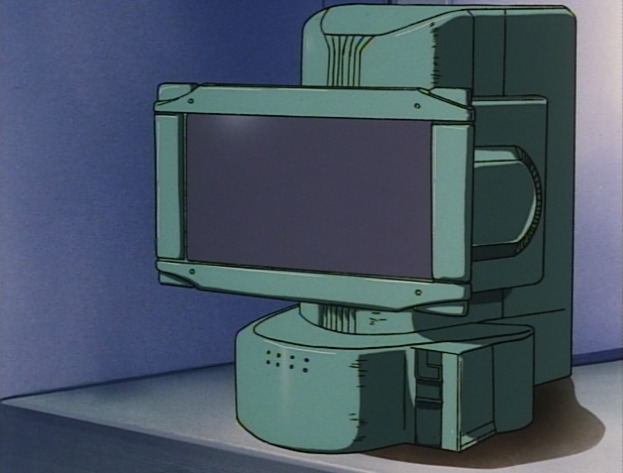 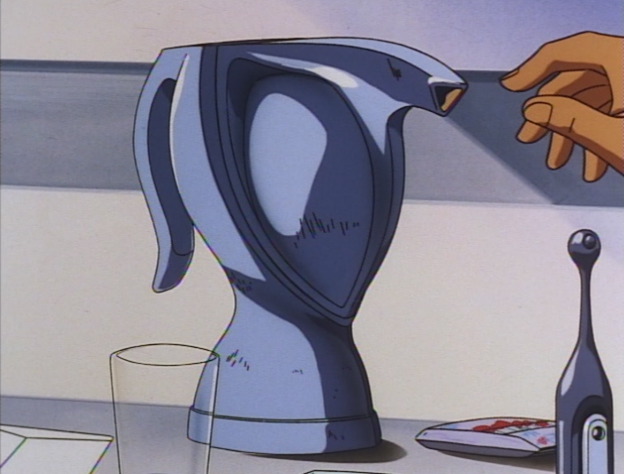 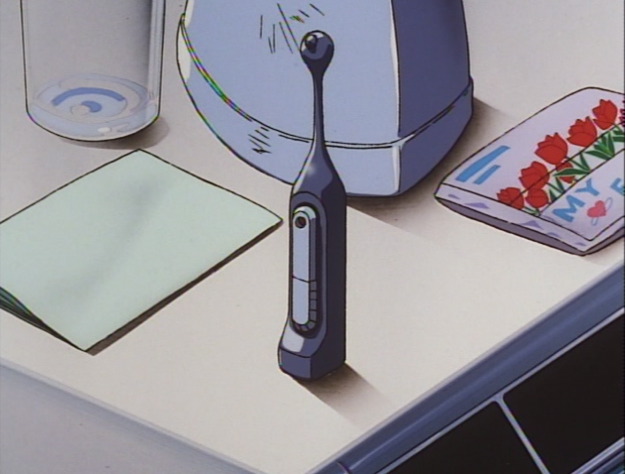 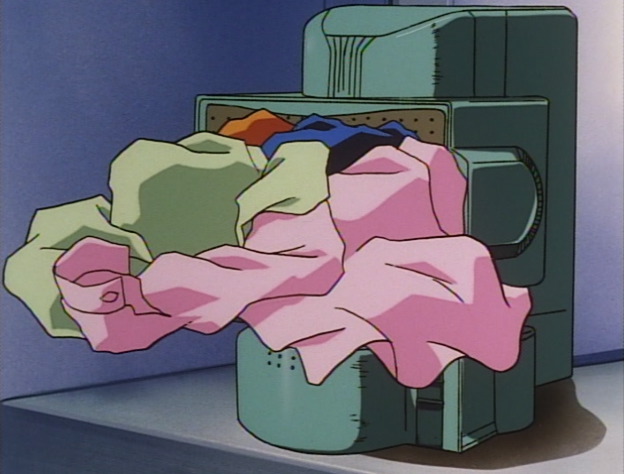 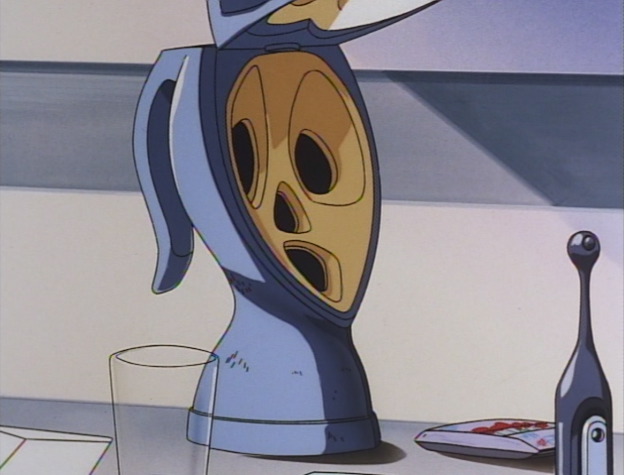 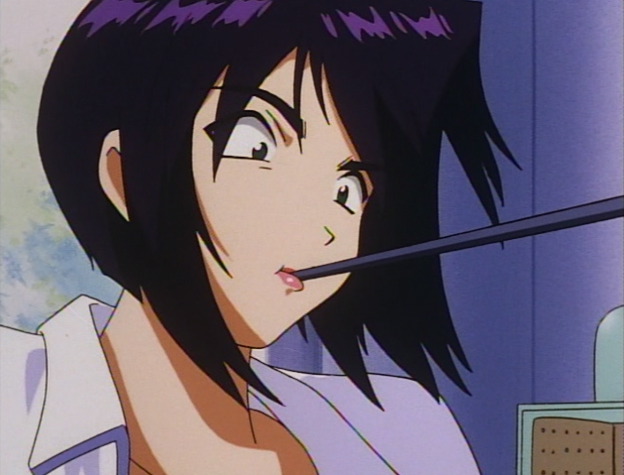 and a probe thermometer.

It’s kind of like that Family Guy parody of Ricki Lake:  “I’m not actually a horse, I’m a broom.”

Faye’s reaction to all this is to run away.  Well first she faints, but then she runs away.  And this is pretty understandable, all things considered… but it’s no real way to deal with your problems.  Whitney tracks her down and convinces her to try to make a new life for herself, and pay off her massive debt a little at a time.  “And if you hang in there, maybe you’ll meet someone wonderful!” he says, staring soulfully down at her, from under his conspicuously normal-sized eyebrows.  And I’m thinking:  “Worst.  Lawyer.  Ever.”

It turns out that he is pretty bad, at that.  Because after a brief romance montage, Whitney fakes his own death in order to trick Faye into assuming responsibility for his own not-inconsiderable debts.  And this, honestly, explains a lot about Faye.  Her mercenary nature.  Her instinctive distrust of anyone who tries to help her.  Her tendency to cut and run.  And so on.  Compared to this, the second half of the episode – where Jet drags in a minor bounty who happens to be Faye’s ex boyfriend, and she busts him out of the brig in hopes of getting some answers about her past – is relatively uninteresting.  Well, it’s uninteresting if you already know that no answers are forthcoming.  And I already told you that.