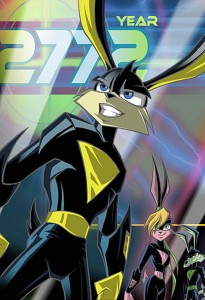 As Hollywood becomes more and more fixated on mining old franchises (sorry, “IP”), it is faced with an eternal question: do you create something that’s completely loyal to the past, or do you radically reinvent things for a new generation? Ten years ago, Looney Tunes went with option B in a really big way and came up with Loonatics Unleashed, a dark post-apocalyptic show in which descendants of Bugs, Daffy, and the rest of the gang are techno-enhanced superheroes. I am serious. This was an actual thing that happened, for two seasons. Take a deep breath and then click on this. I’ve watched it like five times and I’m pretty sure it was pitched as a joke and then accidentally greenlit during some coke-fueled orgy.

So I have to believe that Wabbit, a new show that hews close to the classic formula, is a purposeful and welcome corrective. But that’s a hell of an assignment to give a guy; how can you hope to live up to that Chuck Jones, Tex Avery, golden age of animation legacy? As producer Gary Hartle tells us, the secret is not to worry so much. He surprised me by saying they tried to act as though they just invented these characters. The more I think about it, the more sense it makes. If you try to copy the past, all you’ll get is a xerox at best. So if you really want to honor these characters, you have to give them something new to do.