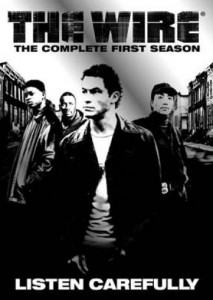 Overthinking It, if you haven’t heard, is two years old.  Hooray, good for us, pats on the back, etc.  What’s more interesting to me is that, over those two years, we keep returning to the same question over and over and over again: How do we judge pop culture?  Is there an objective way of saying “This TV show is Good” or “This movie is Bad,” and, if so, how do we do it?

Beneath that giant rhetorical umbrella drip these fascinating sub-questions: Is Glee “good” because it’s entertaining, or is it “bad” because it doesn’t have a coherent continuity?  Should we judge Avatar based on its opsis (Aristotle for “spectacle”), based on its mythos (a.k.a. “story”), or based on other criteria?  Why does everyone consider The Simpsons of the 90s to be superior to The Simpsons on air today?  And why can’t I like the new Battlestar Galactica even though everyone tells me it’s the pinnacle of televisioned arts?

We at Overthinking It haven’t come up with real answers to any of these questions.  Well, not answers we can agree on, anyway.  Because of that, I’m coming to the conclusion that looking for an objective measure of a piece of art is an impossible task.  That’s right, folks: I’m becoming a pop culture relativist.

So “good” art is relative, huh?  No one can define it objectively; no one can agree on what it is.

Except The Wire.  Everyone agrees about The Wire.

What’s the deal?  How can people who spend hours—days, even—bickering over the merits of Showgirls and Family Guy drop their verbal weapons and sing kumbaya together over some canceled HBO series?

My answer, or at least more questions, are below the fold.

I’ve looked through the reviews in the papers, in the magazines, on Amazon.com.  Everyone loves The Wire.  It’s the best show ever.  And, hey, I like it a lot, too.  The first season?  Mahvelous.  Gripping.  Well-acted.  Significant.  A mi me gusta el Wire.

But why?  Why doesn’t everyone love The Wire?  Well, for one thing, it seems to me that everyone loves its characters.  I was at the movies the other day when a trailer for an upcoming film starring Idris Elba pops up on the screen.  Immediately, two of the friends I’m sitting with shout, “Holy shit!  It’s Stringer Bell!  Fucking Stringer Bell!  Awesome!” Or I’m reading a AV Club article about this season Friday Night Lights, which stars Michael B. Jordan, and suddenly a grief-filled “Where the fuck is Wallace?” comment string eats up the bottom of the page.

And don’t get me started on the deification of Omar Little. 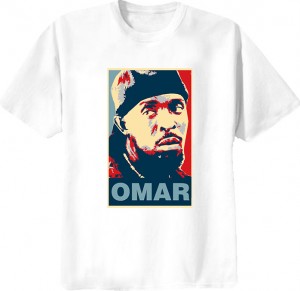 Omar: The only character on The Wire who makes sense on a T-shirt.

The fact is, the characters on The Wire seem to work for audiences.  People are attached to them, interested in them.  They point to these characters when someone asks, “Why do you like The Wire so much, anyway?”  And they say, “For one thing, the characters are well-written.”

“The characters are well-written.”  Okay.  What does that mean?  Here’s a quiz.  Does it mean

Give up?  The answer was E, “all of the above.”  Trick question.  Fooled you!

Yet each of the above statements applies to the characters on The Wire.  Take a look:

Multidimentional, realistic, morally-gray: Applies to most of the characters, particularly Barksdale, D’Angelo, and Stringer.  Doesn’t really apply to Omar or Wallace.  Applies somewhat, but not completely, to McNulty, Kima, and Freamon.

Cool, fun to watch, larger-than-life: Applies to Omar.  Doesn’t really apply to anyone else in the same way.

Identifiable, heroic: Applies to McNulty, Kima, and Freamon.  Doesn’t apply to most of the members of the Baltimore PD or the Barksdale crew.

Pitiable, lovable: Applies to Wallace (and, to a lesser extent, Bubbles).  Doesn’t apply to most of the B’more PD or the rest of the Barksdale crew.

Okay, so on the one hand, we have Wire fans making blanket statements about how great and “well-written” the characters are, and on the other hand, we have the show itself, which is full of wildly different types of characters that cannot all be judged by the same criteria.  For instance, for characters like Stringer Bell and D’Angelo to seem “well-written,” they must made to seem like real, complex, morally-nuanced human beings.  What happens to them at the end of a season must be informed by their clear but complex psychologies, motivations, and actions at the start of the season.  These characters seem to belong in a realistic or naturalistic story and should be judged based on the criteria associated with that mode of literature.

Omar, on the other hand, is a two-dimensional antihero.  He is more developed than a straight archetypical Robin Hood (mostly because he’s gay and likes nursery rhymes), but he’s not developed enough to seem like a real human being you could meet in real life.  A character like Omar should not be judged by his multidimensional personality or his realism.  He can only be judged by his “coolness” factor.  The second he loses that coolness, we stop liking his character.

McNulty, Kima, and Freamon are multidimensional heroes.  Even though they each have one or two morally-iffy moments in the first season, for the most part they are white hats.  Unfortunately, the system (or “Game”) is against them, so what happens to them is informed partly by their personalities and actions but mostly by the personalities and actions of those who hold power over them.  They thus belong in “tragic hero” stories and should be judged by how likeable and identifiable they are.  The second one of them crosses a “moral event horizon” (like, say, if Kima killed and ate a defenseless puppy for no reason), she will likely lose her appeal and may become less valued as a character.  A character can’t be a tragic hero if she isn’t likeable and heroic.  If the audience can’t somehow like or identify with a character, said character’s downfall cannot be cathartic or tragic.

Wallace (and, to a lesser extent, Bubbs) is a two-dimensional object of pity.  Although Wallace is developed as a character more than a lot of other TV children, he is not meant to be seen as a real multidimensional person.  If you don’t believe me, imagine what a show ABOUT Wallace would look like.  If Wallace were the main character of a TV series, I would bet he would be far more developed as a character than he was on season one of The Wire.  On The Wire, though, he’s mostly an adorable cipher meant to be killed so that we, the audience, can feel bad.  It’s manipulation, pure and simple, and, by god, it works.

Characters like Wallace do not really have free will.  What happens to Wallace is a result of his relatively simple psychology and the actions of those around him.  For these reasons, Wallace belongs in a 19th century-style melodrama.  Characters like him should be judged by how well they pull at our heartstrings.

In The Wire, then, “well-written” means different things for different characters.  Does that mean the show is bad in terms of character development and design?  Maybe, maybe not.  Maybe the worst we can say is that (in the first season, anyway) it is inconsistent.  Whether the characters were drawn in this inconsistent fashion on purpose or not remains to be seen—for example, I’m quite interested in seeing whether Omar becomes more fleshed out and realistic or (my bet) even more mythic or larger-than-larger-than life as the seasons progress.

How do YOU judge the characters in The Wire?  I’d love to hear your comments below, but, if you can, try not to spoil seasons two, three, four, and five for me.  Pretty please?

Note: Some of you may be wondering if this is the beginning of a new Overthinking It series on The Wire.  For the time being, let’s say “no.”  A certain favorite series of mine is coming back on the air soon, so I’m going to go back to writing about that starting two weeks from now.  Any Wire-related posts by me will have to wait until later—but, of course, that doesn’t mean one of the other OTI writers won’t decide to tackle the show between now and then.

11 Comments on “Overthinking The Wire (Season 1)”