Why yes, Virginia, I do plan to reuse this graphic every time I write about this show.

Glee has honestly been a little patchy, for me, since its stellar pilot and the equally stellar season opener.  It’s never been less than enjoyable, but there were a couple of weeks there – episodes 3 and 4, to be precise – where I found myself wondering what I had been so excited about.  I’m happy to say that with the most recent episode, the trend has reversed.  And I’m even happier to say that I think I’ve figured out why, because otherwise I don’t know what I would write about this week.  Episode six brought back an element of the pilot that they maintained in episode two, let slide in episodes three and four, and hopefully will never let slide again:  the epic voice.

Voice in this context has nothing to do with the show’s music, which has been consistently fantastic all along.  I’m using it here to describe a certain kind of writing.  Basically when you sit down to tell someone a story, you have two options.  Either you can try to present the story as events that are actually happening, while trying to make yourself as invisible as possible, or you can call as much attention to yourself as possible, while giving up on any attempt to convince people that story is actually taking place.  The first of these techniques is dramatic.  The second is epic. 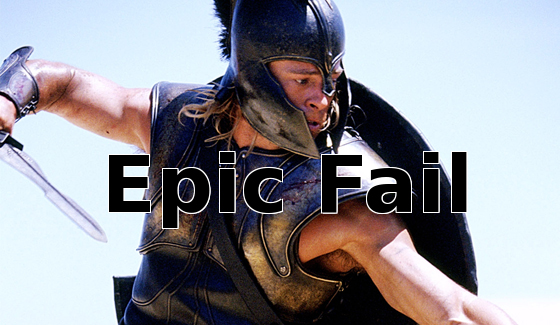 I can't believe that I had to make my own image after searching for "Brad Pitt Achilles Epic Fail" on the Internet got me nowhere.

Why is it called the epic voice?  Because epics do it all the freaking time, especially at their beginnings and endings  where the speaker/poet calls explicit attention to his/her/its own performance.  Fitzgerald’s translation of the Odyssey opens “Sing in me, Muse, and through me tell the story of that man skilled in all ways of contending…”  The beginning of the Maureen Kovacs’ translation of the Gilgamesh Epic contains this remarkable passage:  “Go up on the wall of Uruk and walk around, examine its foundation, inspect its brickwork thoroughly.  Is not (even the core of) the brick sructure made of kiln-fired brick, and did not the Seven Sages themselves lay out its plans?  …………. Find the copper tablet box, open the ….. of its lock of bronze, undo the fastening of its secret opening.  Take and read out from the lapis lazuli tablet how Gilgamesh went through every hardship.”  The Odyssey started as an oral tradition, and begins with an invocation of orality.  Gilgamesh, in the surviving versions, is self consciously literary (and even architectural, the construction of the city being bound up in the tale itself).  And even when they aren’t specifically explaining the process of storytelling, the authors of epics are constantly calling attention to themselves.  One of the main villains of the Odyssey is named Melanthius.  Melas being the Greek word for “dark,” this is about as subtle a villain name as Skeletor, although possibly a step or two up from Laird James McCullen Destro XXIV. When someone names a character like this, they do not want you to believe that this was actually somebody’s name.  They want you to understand that, “look, I am right here telling you now that this Melanthius guy was really, really bad. And you can believe me, because I have a harp!”

What does all of this have to do with Glee?  Think about those first two episodes, and the most recent one.  The thing they have, which the other episodes lack, is narration, big long stretches of narration, where one character after another tells you about their past, about their situation, and their reaction to other people’s behavior, and really about anything at all.  This is certainly a convenient way of letting us know which characters are the main ones, and more importantly a way to cram a huge amount of character exposition into a short amount of time.  But most importantly of all, it creates the quintessentially epic scene of the storyteller in the act of telling a story.  And this, more than anything else — even the music! — may be what makes Glee so much delirious fun.

What I don’t understand — and what I’d like some help from you in the comments trying to figure out — is why it works.  So far I’m just figuring this out empirically.  The first two episodes had this voiceover structure, and they hummed along.  Episodes three and four didn’t have it (or had very little), and felt somehow… smaller.  More ordinary.  Less gleeful.  Episode five didn’t have it either, but it had Kristen Chenoweth, who could fill an episode of C-SPAN with pep and vim if they gave her a musical number of two, and really the producers of Glee are freaking negligent if they aren’t out there right now doing whatever they have to do to get her as a full time cast member and so for that matter so are the producers of C-SPAN, but I digress.  The point is that episode six, Chenowethless, was humming along just like the first two did.  And it had voiceovers galore.

So what’s the deal?  Let us not forget that, according to the rules that we all learned back in high-school English, this is bad writing.  Show don’t tell, right?  That’s rule ONE.  And yet, episodes three and four showed.  They showed us Puck feeling betrayed by Quinn’s indifference.  They showed us Kurt’s pain and fear as he came out to his father.  And both of these moments were great, really beautifully played and written scenes… but somehow the episodes as a whole felt stale.

Felt like nothing so much as an updated remake of Dawson’s Creek with showtunes and dance routines, which is not what I want the show to be even though in a certain sense it is quite fundamentally what it is.

By contrast, episode six gives us Rachel narrating (i.e. telling us) her morning routine, and Sue writing in her journal (i.e. telling us) about her plans to destroy the Glee club, and while neither of these sequences is particularly brilliant in standard dramatic terms I found myself sitting there with a smile on my face thinking “Yes, this is it, this is what’s been missing!”  I’d love for someone out there in OTI land to tell me why, because I’m mighty confused, myself.

Another thing that doesn’t make sense is that typically this kind of writing is excused for epics like the Odyssey because they are old (the “Homer wrote like that because he didn’t know any better” defense), and serious (the “weighty matters require leaden prose” defense), and crucial to national identity (okay, I don’t really even know the rationale behind this one, but I have heard it).  And yet Glee is none of these things:  it’s a brand new comedy which is very specifically about high school but also, I think, not at all targeted to high school students.  What’s more, some of the best TV comedies in recent memory have been just slathered with the same kind of heavy-handed, attention grabbing, self-consciously artificial writing.  I’m thinking here of the late lamented Pushing Daisies, the later, lamenteder Arrested Development, and How I Met Your Mother (which is still airing on Mondays on CBS so start watching it now while you still have a chance).  All three have narrators, but there’s more to this than narration.  The epic voice is also there in Arrested Development when Lucille Bluth starts to take off her blouse and the screen suddenly cuts to a title card reading “Footage not found.”  It is there in How I Met Your Mother when Barney turns flat front to the camera and starts doodling in the air, John Madden style, to demonstrate the Vicky Mendoza diagonal on the Hot-Crazy scale.  It is there in the hyper-rhetorical, hyper-articulate dialogue on Pushing Daisies – lines like “Then you haven’t been hugged properly. It’s like an emotional Heimlich. Someone puts their arms around you and they give you a squeeze and all your fear and anxiety come shooting out of your mouth in a big wet wad and you can breath again.” – which the actors deliver with a kind of breathless stumbling nonchalance as if they were themselves not quite sure where these mazes of verbiage were coming from, making it clear that the lines belonged to the writers first, the actors second, and the characters last or not at all.  And it’s there in almost every aspect of the best episodes of Glee, from the improbably polished song performances, to the sugar-candy production design, to broad high school stereotypes, to — my favorite element, and one which sadly has gone MIA since the second episode — the way that all the incidental music was either performed by a non-diagetic acapella chorus or by a diagetic group of highschool musicians who just happened to be rehearsing somewhere in the background of the scene.

Any thoughts on this would be welcome.  I may come back and revisit this topic in a couple of weeks when I have a few more episodes to deconstruct  Certainly, now that that writing this has forced me to organize my thoughts a little, I’ll be watching this Wednesday’s episode with all this in mind, looking for the moments where the authors decide to show their hand.  In fact, I suggest that we all do that.  And on Wednesday, if you’re interested, we can recongregate right here in this comment thread to Overthink the heck out of it.  See you then!

19 Comments on “Tell Don’t Show: Glee and the Epic Voice”