What is it about this guy that makes him look so goofy?

Love him or hate him, it’s safe to say that Nic Cage is a decidedly uneven actor, or at least that the movies he’s in are all over the map. The same filmography that has critically acclaimed character pieces like Adaptation and Leaving Las Vegas also has disposable mindless fare like Ghost Rider and National Treasure II: Book of Gratuitous Sequels.

Critics have been debating the relative merits of Cage for years, but the recent discovery of the “Nic Cage as Everyone” blog, which gleefully toes the line between tribute and mockery, has stirred the fires of Cage-troversy once again. 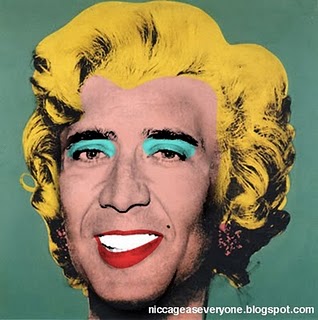 Words cannot describe how strange this is.

Thankfully, we have our friends IMDB, Excel, and Standard Deviation* to answer that question for us. That’s right, it’s time to analyze the Quanta of Cage.

First, our methodology: let’s take the movies of Nicolas Cage (everything that he’s starred in, excluding animated movies and anything released in 2009), analyze those movies’ IMDB ratings, and compare them to other leading men from his era.

It’s not perfect, but it’s what we’ve got. So let’s crunch some numbers, shall we?

*Standard disclaimer applies: I Am Not A Statistician (IANAS). If I made any mistakes, feel free to give me the “Well, actually” in the comments.

1. The Quanta of Cage

From 1983’s Valley Girl to 2008’s Bangkok Dangerous, Nic Cage has starred in 45 movies. Not surprisingly, there’s a mix of great and not-so-great movies in this bunch: 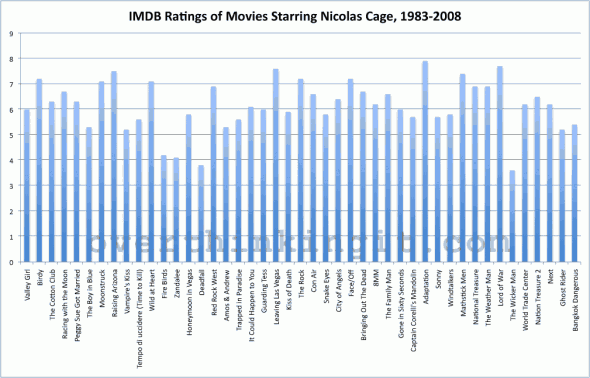 This raw data by itself doesn’t tell us much, but we do see some patterns of hits intermingled with misses (look at the roller coast from Captain Corelli’s Mandolin to Adaptation to Sonny).

Next step: let’s take a look at the distribution of movies by rating: 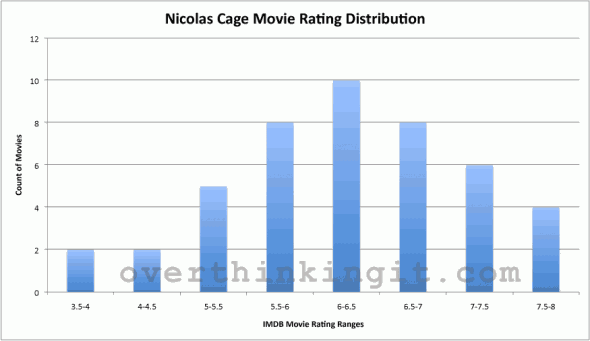 This is a handy way of seeing where most of Nic Cage’s movies’ IMDB scores reside (in the 6 to 6.5 range). But enough of this warmup; let’s get to the most important stats:

So what do this fancy “Standard Deviation of Cage” tell us about the wild fluctuations of quality in Nic Cage’s movie career? Simply put, it means that the average distance between Nic Cage movie ratings from the average of 6.16 is 0.99 in either direction.

Is that a lot? Well, let’s think about it.

6.16 is average for Nic Cage. That’s It Could Happen to You/8MM territory. Respectable, but nothing to write home about.

All fine and good, but all of these stats by themselves don’t tell us much. What we really need to do is compare them to Nic Cage’s contemporaries.