In particular, I watched Showgirls.  I watched Showgirls on broadcast network TV.  If you’re ever planning to watch Showgirls, I highly recommend that you do it this way.  Typically “edited for broadcast” means that they leave the sexual scenes out.  But this won’t work for Showgirls, because so many plot-critical scenes have nudity.  So instead, they draw in underwear on the women, frame by frame.  And it looks SUBLIMELY RIDICULOUS. I couldn’t find a picture of this online, but rest assured that you could duplicate the effect in MS Paint.

Anyway, Showgirls did not fit into any of my Freudian categories.  I enjoyed the experience of watching it, on some level.  But exactly how I enjoyed it is very difficult to articulate.  It certainly didn’t appeal to the ego:  it’s way too classically “bad” for that.  And since it’s widely considered to be one of the worst movies ever made, it wasn’t making me feel virtuous.  That leaves the id… and yet, incredibly, Showgirls does not appeal to my prurient interests.  This is partially because of the aforementioned CGI lingerie, and partially because of Verhoeven’s basic cinematic strategy.  But more on that in a bit.  First, a new and more elaborate chart. 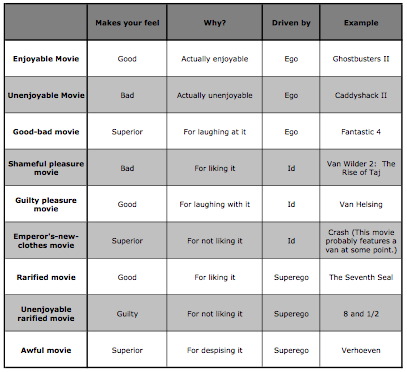 Like I said, subjective! And I did like Amarcord! But feel free to mock me in the comments, I deserve it.

Another quick note on:  guilt v. shame.  Guilt focuses on the act, shame on the one who commits it.  With a guilty pleasure movie, I can say “Oh, I have good taste, but I allow myself this little sin.”  With a shameful pleasure movie, I say “Huh.  Maybe I have bad taste.”  And that’s how I feel about Van Wilder 2.  I watched that on TV, and enjoyed it.  Sometimes I felt myself laughing at – as opposed to with – some of the more stupid jokes… but not often.  Mostly I just went with it.  And I still feel kind of uncomfortable about that part of myself.  Note also that you could theoretically come across a movie that you felt ashamed, rather than guilty, about not liking. This hasn’t happened to me yet.  But in music – can I really admit this? – I’ve… okay, I’ve never much liked Beethoven’s 9th Symphony.  And this makes me feel shame. 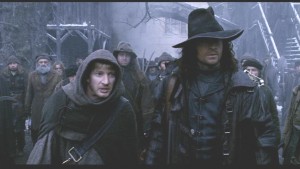 I mean, come on, the hat alone scores you some points.

Anyway, Verhoeven.  It being Verhoeven week and all.  You’ll notice that my (overly schematic, to be sure) chart claims that there are three ways to feel superior to a movie you’re watching, one appealing to each of Freud’s layers of the psyche.   First, there’s the movie which is simply bad.  Watching Fantastic 4, we are confronted with constant pieces of bone-headed filmmaking:  wooden performances, gaping plot holes, special effects that really needed to be more special, and scene after scene of pointless leering at Jessica Alba.  While the movie is unenjoyable on its own merits, the incompetence is amusing, and so it is possible to enjoy laughing at the film (although you’ll feel kind of nauseated after a while).  My impression is that the driving force here is pride, hence ego:  “I am superior to these boneheaded filmmakers, and I laugh at their folly.” Note that there’s only a subtle difference between this and the Guilty pleasure movie.  Van Helsing has a lot of garbage in it. Lots of the special effects needed to be specialer.  The plot is like a doily:  not so much a piece of fabric riddled with holes as it is a network of holes outlined by scraps by fabric.  And speaking of scraps of fabric, the Beckinsale-sploitation here is almost as flagrant as the Alba-sploitation mentioned above.  But there’s enough that works in Van Helsing – the art direction, score, pacing, and performances are all pretty great, in their over-the-top way – that you don’t feel superior to the filmmakers.  You wouldn’t say that they succeeded, but you respect what they were trying to do.  And you feel like you could sit down and watch the movie with them without it being crushingly awkward.  You even feel like they would laugh at the same things that made you laugh.

Then there’s the “Emperor’s New Clothes” movie.  Sometimes a film will come along that, by critical consensus, is a Good Movie, an Important Statement, a Must See.  It is not at all uncommon for a backlash to form against the movie.  This much is unremarkable, and probably fueled by people’s honest, ego-driven first impressions of the film.  But sometimes the backlash gets really intense, and movies that are (at worst) middling and overhyped, will get consigned to the lowest abysses of suckitude.  It’s not the film that is offensive:  it’s the critical edifice that has formed around it.  And here, I think the id is at play.  The impulse that fueled a thousand pans of Crash is the same impulse to destroy, to tear down, that leads children to do things like stomp on an anthill.

Finally, there’s the awful movie.  At first glance, these tend to be similar to the good-bad movies:  the acting, writing, plotting, etc. are for the most part crushingly bad.  But added to the general incompetence is the sense of moral failure:  a sense that the characters are shallow, evil, people and that (at least at first glance!) the filmmakers are shallow, evil people for asking us to empathize with the characters.  Our enjoyment of these films, such as it is, comes from feeling morally and artistically superior from the film, the filmmakers, and the people who enjoy this kind of trash unironically.

This little corner of the psyche is where Paul Verhoeven seems to live.  Not all of his movies are equally awful:  while Showgirls has no redeeming qualities (at least in the cut for TV version), Starship Troopers and Basic Instinct are probably about %70-%30 awful to guilty-pleasure.  Robocop isn’t awful at all.  But the fact that he has made movies like Showgirls – and more than once! – establishes him as Hollywood’s leading bard of the awful muse. 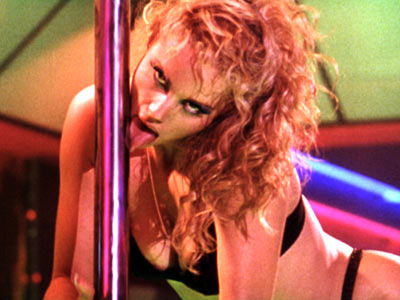 Don't worry, Elizabeth, we won't light and frame this shot so that you look like a the reanimated corpse of a drag queen.

One more interesting thing about the awful movie:  unlike the guilty pleasure movie, where the filmmakers are pitiable, or the good-bad movie, where they are simply contemptible, Verhoeven seems to be in on the joke. The same doesn’t necessarily apply to his collaborators.  I don’t think that Joe Eszterhaz understands how appalling the Showgirls script is.  And I definitely don’t think that actors like Elizabeth Berkley and Caspar van Dien knew that they were being set up as laughingstocks, which raises some interesting questions about their collaboration with Verhoeven.  Did he just outright lie to them?  “Listen, Elizabeth, the way you asked for that Pepsi was too restrained.  Remember, in the scene right before this Nomi dropped a brick on her foot, so she should sound like she’s going to slap the guy.”  “But Paul, I was looking over the script…” “Yes?” “And there’s no brick-dropping scene right before this.  I also didn’t see that one you were talking about this morning, where she’s supposed to slam her thumb in a car door right before she invites her friend over for coffee.” “Yes yes, there were some re-writes.” “And about those scenes where we shot yesterday, where you told me that Nomi is actually a robot pretending to be a stripper, so I should act like someone who had only ever heard emotions described?” “Yes?” “I didn’t find anything about her being a robot in the script.”  “Like I said, rewrites. Don’t worry, we’ll tighten it up in post production.”

The fact that you feel like Verhoeven is complicit with you in despising the movie can make tripe like Showgirls and Starship Troopers surprisingly fun to watch, and FANTASTICALLY fun to Overthink.  So.  With all this in mind, welcome to Verhoeverthinkingit week!  We hope you enjoy your stay.

8 Comments on “Paul Verhoeven and the Aesthetics of Awfulness”