[While Mlawski’s analysis of Battlestar Galactica is on indefinite hiatus, another Overthinker is surging into the gap, with another series of posts on a geek-friendly science fiction franchise.] 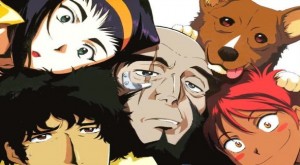 Cowboy Bebop and I have something of a troubled past.  I had been hearing great things about the show pretty much since it came out (and I mean, like, freaking rapturous things), but I somehow managed to avoid watching it until the summer of 2008.  Even then, all that I saw was the credits sequence.  But what a credits sequence it is:

Judging from that credits sequence, Coyboy Bebop was some kind of hundred-year-storm combination of things I think are awesome.  Jazz!  Kung Fu! Animation! Spaceships! Pop Art! – and while I prefer an interesting female character to a pin-up any day of the week, I am not immune to the attractions of – Cheesecake! My appetite was whetted.  Scratch that:  my appetite was honed down to razor sharp keenness in one of those Williams-Sonoma electric home knife sharpener dealies, to the point where I could use it to do all the fancy tricks like chopping a can of tomatoes in half or slicing really thin and perfect slices of bread.  Based on the strength of the credits alone, I was damn near ready to buy the DVD box set one day when I came across it on sale.  But since I don’t have a lot of disposable income (buy a shirt, dammit!), I just decided to Netflix it, one DVD at a time.  And at first, I was glad I did, because when I started watching the series, I was distinctly underwhelmed.

I’ll get into why in a little bit (and also why I, underwhelmed, kept on watching).  For now I’ll skip ahead to the happy ending:  it gets better.  Lots better.  To the point where if I find those DVDs on sale again, I’m buying them first and worrying about how to pay for it later.   To the point where – about ten episodes in – I decided to loop back to the beginning again and subject the show to a full on, close-read Overthink, the results of which I’ll be sharing with you every two weeks or so for the next couple of months.

The episode by episode analysis is going to start on November 23rd, and each installment will work through one DVD’s worth of episodes. If you haven’t watched the series yet – or if you have, and want to refresh your memory – I encourage you to fire up your Netflix and watch along with me.  Today, I’ll just give you a general introduction and a rundown of the cast of characters, so that next week we can dive right into the analysis.

First, the setup.  The show is set in a distant future where humanity has colonized the solar system. In its treatment of spaceflight, the show’s sci-fi is semi-hard (like a nice Emmentaler):  although there are some handwavey “warp gates” involved, interplanetary flight still takes a loooong time, and running out of fuel can be an issue.  And this is crucial to the basic premise:  because none of the planetary governments have the resources to pursue criminals between planets, interplanetary law enforcement is basically the province of bounty hunters.  (This – although not much else – is sort of like the situation depicted in a lot of Westerns and might explain the titular “Cowboy.”)  Cowboy Bebop chronicles the adventures and (mostly) misadventures of a particular bounty-hunting team, who I’ll introduce to you at this juncture right here. 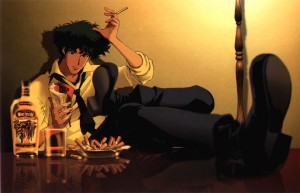 Spike Spiegel: the main character, to the extent that there is one.  Visually, a combination of Lupin III (his general visual aesthetic and oversized feet), Bruce Lee (his fight choreography), and Quadrophenia-era Keith Moon (his wardrobe and hair, although that might also be Sid Vicious), which is awesome.  Unfortunately his personality – at least as it appears at the very start of the series – is pretty deeply annoying.  He is petulant and ungrateful, and rude in a way that is probably meant to be refreshingly direct but in fact comes across as straight-up rude.  He only ever cracks a smile when he’s getting to kick some kind of ass.  This in itself is fine, and indeed some of the bright spots in the first few episodes are the moments in which ass is kicked…but often he seems to be treating the ass-kicking as a lark, which comes across as smug and condescending. At least he never starts a fight for the fun of it.  I have fairly little experience with anime shows in general, but I will say that in many ways Spike’s character reminds me of a more petulant version of Gohan in the early stages of Dragon Ball Z, or even moreso of Ranma Saotome (but again more petulant).  I can’t think of an American exemplar of this character type which makes me wonder if it’s somehow particularly Japanese… but odds are that they exist, and I just can’t think of them.  In any case, these characters didn’t irk me the way that Spike does, which I think is probably down to the fact that they are children, which means that they have a license to act childish.  Spike has no such excuse (although I suppose Cowboy Bebop was probably intended for pretty much the same audience).  If all of this was played for comic effect, I would have found him a lot easier to take.  But I think he’s supposed to be an honest-to-goodness hero, or at least an admirable antihero, and I always just find myself wanting to slap him.  Ah well… like I say, it really does get better.

Oh, and in addition to all of this, Spike also has a Mysterious Tragic Past, which seems to be shaping up as the main mystery of the overarching plot.  Please leave this unspoiled in the comment threads. 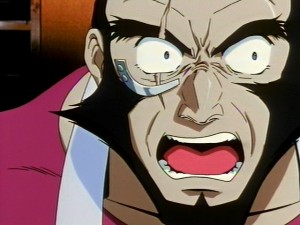 Jet Black: Spike’s partner and/or boss and/or surrogate father (it’s a little unclear, but he owns the spaceship they live in, and tends to make the executive decisions).  To a degree, he is the brains to Spike’s brawn:  Spike usually does the actual apprehending of the bounty-of-the-week, but Jet tells him where to look.  Jet is everything that Spike isn’t.  He is endearing, serious, warm, peace-loving, and – alas – he is NOT the character that gets the most screen time.  He also has an awesome beard, which may be coloring my sympathies somewhat.  It’s not quite clear at this point whether Jet has a tragic past, but considering that he has a prosthetic arm and a rivet holding his face together, it is not unlikely.  Oh, and by the way, Mr. Black? (Can I call you Jet?) I’m putting you and your alliteratively named friend Spike there on notice for having the most ridiculously and self-consciously “awesome” TV character names ever.  Jet Black.  Honestly. 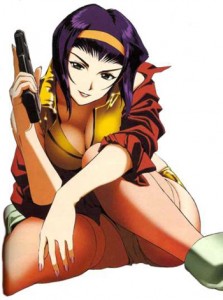 Faye Valentine: Faye show up a couple of episodes in, and feels like a one-shot character at first, but winds up becoming the third major character on the show. As (basically) the only woman, she has to carry a lot of weight.  She’s the femme fatale.  She’s the tomboy.  She’s the love interest.  She’s the action girl.  She’s the damsel in distress.  She’s the cheesecake. (Exhibit A.  Faye seems to have had a strong effect on certain segments of the target demographic:  trying to find an image to show you, I actually had to turn on safesearch in order to convince google that when I typed “Faye Valentine” I was just searching for a picture of Faye Valentine, and not a crudely drawn picture of Faye Valentine having sex with, like, twenty dudes.) Like Spike, she gets on my nerves a lot in the early going.  She’s meant to be a tough-as-nails broad with a heart of gold, which can work well when done right.  But they make two missteps here.  First, the crusty exterior is a little too crusty.  Standoffish is one thing, but Faye comes across as – again! – petulant, and what’s more she flat out double-crosses and robs the other crewmembers on a semi-regular basis, which makes it hard for me to accept that they’d let her keep sticking around.  Second, they telegraph the “heart of gold” aspect a little too broadly.  At no time did I ever expect Faye to turn out to be anything other than an innocent at heart.  Maybe this was necessary, since it does makes her more likable when she’s in her abrasive mode, but it makes the innocent moments feel a little forced.  Like Spike and probably Jet, she has a Mysterious Tragic Past, and in her case it has caused her to owe a catastrophic amount of money to some shady and dangerous people, which motivates a lot of her behavior. Beyond that, let’s leave this one unspoiled.