Kay Eiffel is a reclusive novelist. Critically acclaimed and wildly successful, she has been working on her most recent book for several years. Her publishing company sends her an assistant – played with a beautifully straight-faced delivery by Queen Latifah – to prod her into writing more. So, eventually, she begins writing about a boring man named Harold Crick.

Harold, however, is a real human being. As Eiffel writes, Harold hears her narrating in his head. What Eiffel writes happens to Harold out in the street. And Harold has no idea what’s going on.

Stranger Than Fiction is entertaining enough up to the Ghost Ship Moment where Harold realizes he’s a character in a novel. But after he realizes he’s the subject of a manuscript by world-famous writer Kay Eiffel, the audience has to start asking some serious questions. Such as: why exactly is Kay Eiffel so famous?

Here’s a sample of Eiffel’s writing:

This is a story about a man named Harold Crick and his wristwatch. Harold Crick was a man of infinite numbers, endless calculations, and remarkably few words. And his wristwatch said even less. Every weekday, for twelve years, Harold would brush each of his thirty-two teeth seventy-six times. Thirty-eight times back and forth, thirty-eight times up and down. Every weekday, for twelve years, Harold would tie his tie in a single Windsor knot instead of the double, thereby saving up to forty-three seconds. His wristwatch thought the single Windsor made his neck look fat, but said nothing.

Not bad, but not as clever as it’s trying to be.

Unfortunately, this guitar said, “When I get back to Georgia, that woman gonna feel my pain.” This one said something along the lines of, ‘Why yes, these pants are lycra.” These said, “I’m very sensitive, very caring, and I have absolutely no idea how to play the guitar.”

Not very clever either, and there’s no excuse here.

Little did he know that this simple seemingly innocuous act would result in his imminent death.

That’s just bad. There’s foreshadowing and then there’s Dan Browning. To say nothing of the sloppy construction of “simple seemingly innocuous” – using three words where one would do. 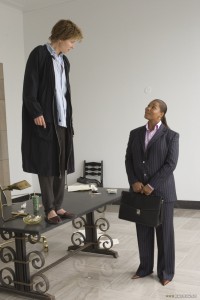 Most writing workshops save the Cultivating Eccentricities seminar for the last day.

Stylistic complaints aside, the substance of Kay Eiffel’s novels merits little more praise. “Every book I’ve ever written ends with someone dying,” Eiffel laments to her assistant Penny. Really? Every single one? That’s gone from a commentary on the postmodern world to just being trite. And while I won’t spoil the plot of Stranger Than Fiction by saying how the novel Eiffel’s writing ends – the novel that may kill Harold Crick – I will say its theme leaves a saccharine aftertaste: that strangers’ lives are connected by dozens of implausible coincidences, and isn’t it fascinating when you think about it, etc.

As a critically acclaimed recluse, Emma Thompson’s character is clearly meant to evoke novelists like Thomas Pynchon and J.D. Salinger. If any writers from the Twentieth Century have claims to being geniuses, they are near the top of that list. Unfortunately, the literary stylings of Kay Eiffel show neither the trenchant wit of Pynchon, nor the salient insight of Salinger. It’s not transcendent enough, or human enough, to be literary genius.

So perhaps Hollywood can’t invent a genius. But can the movies depict a real one?

A Beautiful Mind is the Ron Howard weeper depicting the life of the brilliant and schizophrenic mathematician John Nash. An ingenious analyst, Nash was recommended to graduate school at Princeton with a one sentence letter from his adviser at Carnegie Mellon: “This man is a genius.” Not only did he excel in abstract math – creating a theory in which Riemann manifolds could be depicted in “real” Euclidean space – but he did important work in cryptography and economics as well.

But it was Nash’s work in game theory that won him the Nobel Prize. Game theory studies the outcomes of limited scenarios between strategic decision-makers. John Nash grew famous by writing a thesis at Princeton proposing a documentable equilibrium in any game involving two or more players. Suppose we have two players, Albert and Betty. If Albert has made the best decision available to him, taking into account Betty’s decision, and Betty has made the best decision she can, taking into account Albert’s, then Albert and Betty are said to be in a Nash equilibrium. What made this revolutionary, and worthy of getting named after him, is that Nash did the math to prove it. 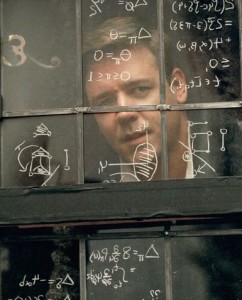 Write on a blackboard? Any fool can do that!

Here’s a good example of a Nash equilibrium:

Wrather, Fenzel and Perich are sitting around the apartment, wondering what to eat. Perich suggests pizza, but Fenzel is more interested in subs. The economics of ordering a pizza are such that it really only makes sense to get one if all three of us want one. Even if I sway Wrather to my side, that’s still more than either of us would be willing to pay. Thus, we all end up getting subs.

Got it? Now here’s a bad example of a Nash equilibrium:

If we all go for the blonde and block each other, not a single one of us is going to get her. So then we go for her friends, but they will all give us the cold shoulder because no one likes to be second choice. But what if none of us goes for the blonde? We won’t get in each other’s way and we won’t insult the other girls. It’s the only way to win. It’s the only way we all get laid.

Where did that second example come from? A line of dialogue from A Beautiful Mind, of course.

Akiva Goldsman’s adaptation of A Beautiful Mind drew lots of criticism for glossing over Nash’s homosexuality, supposed anti-Semitism, and the particular details of his schizophrenia. But only a few academics cared about its inaccuracies in depicting game theory. John Nash may come off as a tortured and confused soul, but his real genius gets short shrift.