There’s one more issue that I’d like to address.  If being a parent is the only worthwhile thing that one can do, how does Ellie fit into the story?  There are two possible readings.  The one that I like – the one that I choose – is that when they were denied children they regressed together, and while in a certain sense they never grew (ha ha) up, they were still able to have a pleasurable and even a meaningful life living for each other and for their shared dreams.  This is the surface meaning, certainly, and as I say, I like it:  it would be nice for the film presented some kind of positive experience outside of the parental bond, even if it’s presented as somehow lesser, and is still a subset of the nuclear family.  But another possibility exists – I don’t like this one, you can definitely read it into the text – which is that Carl was Ellie’s surrogate infant.  In this reading, while his childless life had no meaning until he took responsibility for Russel, she found her meaningful maternal role by taking care of him.  Here’s the evidence:

1)  The relationship montage in the first reel shows her constantly dressing him, but he never dresses her.  This isn’t definitive though, since in more general terms, she is always plays the active/leader/seducer role in their relationship, while Carl is the passive/follower/seducee.  But then, in Hollywood, women are often presumed to be passive until they become maternal.

2)  Carl is infantilized through character/costume design.  It’s not so much that his head is the same size as his torso – that kind of comes with the territory of animation – but notice how his hand is the same width as the rest of his arm (like Russel’s, and like a real toddler), while Ellie has a well defined wrist (as do most real adults).  You get to see Carl’s wrists later in the movie… but only after he’s accepted his role as Russel’s father-figure, and (literally) rolled up his sleeves and gotten down to business. 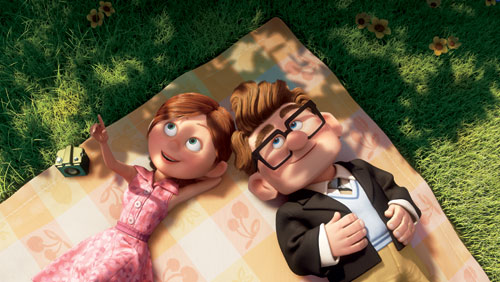 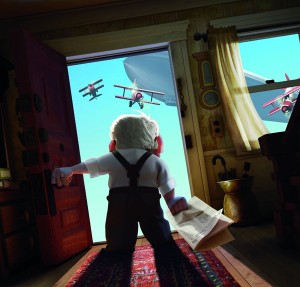 3) While Carl still thought that the adventure book needed to be filled with extrinsic adventures, Ellie had already “grown up” enough to fill it with photos of their life together.  Her inscription at the back of the book isn’t a love note, it’s an important life lesson, and while people learn things from their romantic partners all the time, it’s not as intrinsic to that kind of relationship as it s to the parent-child relationship.

Like I said, this isn’t the reading I prefer.  In fact, I actively dislike it.  The idea that a female character can’t be active without being maternal is patently offensive.  And I really like Carl and Ellie’s relationship as a ROMANCE, which this reading kind of destroys… but the evidence is there.  And this reading fits better with the film’s overriding ideology that “child-rearing = fulfillment.”  And it continues the Disney tradition of offing the mother.  So while I’m going to ignore this interpretation as much as I can, it’s hard to ignore it completely.

12 Comments on “Another take on Up”