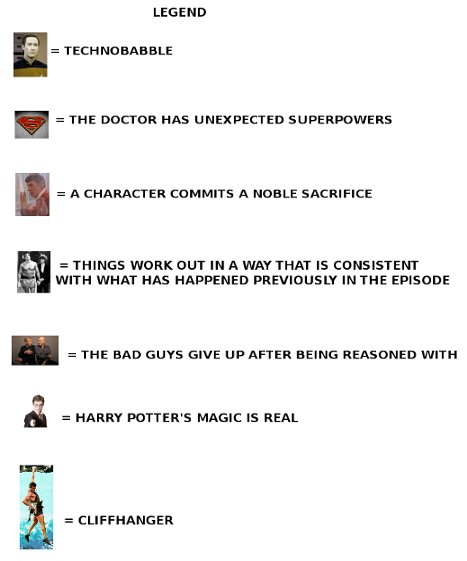 For this analysis, I went through the latest bunch of episodes of Dr. Who and looked for the climactic events that resolved the problems of the plot. I’m not going to try sorting through forty years of the show, so I decided to try to keep things relatively consistent by only focusing on the run of David Tennant, the latest actor to play the Doctor. He’s the guy who found the heart of the role, breathed new life into it, gave it a new consistency after being in limbo for a while, and bumped it into the mainstream. Plus, I’ve watched these episodes before, so I’m pretty familiar with them.

I went through plot summaries and my memory of the individual episodes and recorded how exactly the Doctor and pals got out of their often insurmountable problems. The results are a little surprising, but still very much in line with what The Jim wrote in about. About half the time, the episode just doesn’t fix the problem and leaves it until later (although the show almost always uses technobabble to get back on track after a cliffhanger). 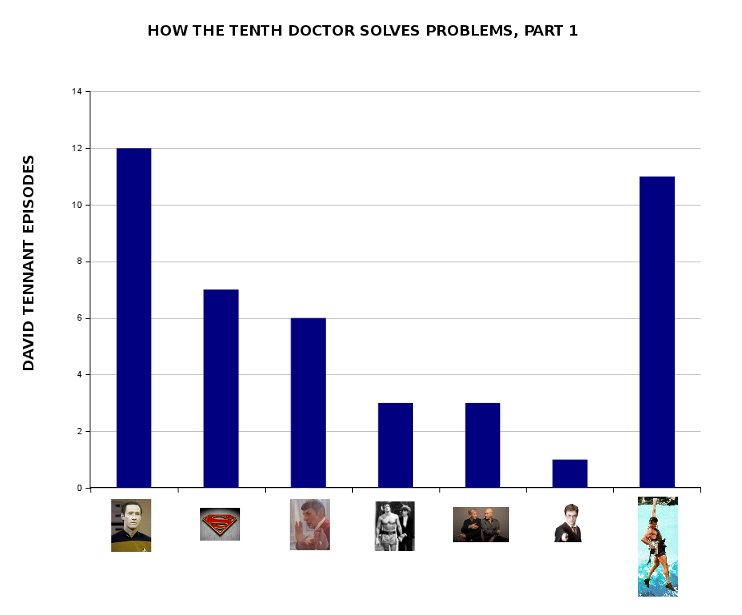 After that, technobabble was far and away the most common way the problem was solved. There’s a monster attacking the doctor, and, oh, it turns out his DNA can be disrupted by pipe organs! Or, hey, I rewired the alien device to do something totally different from what it is supposed to do! Or, look, that sonic screwdriver doubles as a Slap Chop, so the Celery Empire is history!

Each episode has lots of minor wins and bits of technobabble, but I wasn’t really interested in events that just fill time — I’m looking for the tipping point, the fulcrum on which the show must turn. The interesting part of Dr. Who plotting is how the stakes rise and the Doctor seems less and less capable of solving the problem as the episode progresses, but at some point, because the show isn’t really serialized, the writers hit the corner and have to wriggle him out of the insolvable problem. 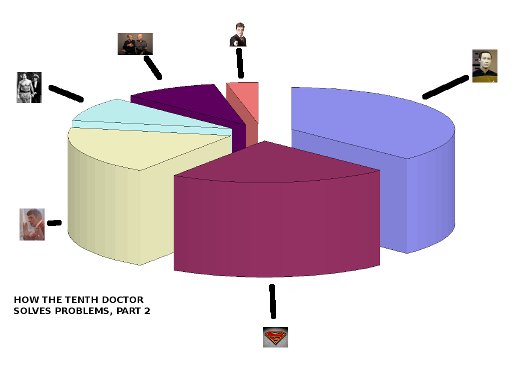 This is, by the way, something we’ve seen less and less of as mysterious dramatic serials like The Sopranos, Lost or Battlestar Galactica came to dominate the boutique culture of scripted television. The great thing about these shows is how high the writers can raise the stakes — how much more complex things can get, how much more hopeless or how much more intense. How we can go from thinking we understand the reality to feeling we know nothing and there is a whole new world to learn about. How dark it can get before the dawn.

But it is because of traditional shows like Doctor Who (not that it is exemplary, just that it shares this trait and it happens to be the show we’re talking about; I could just as easily name-check I Love Lucy, The A-Team or Everybody Loves Raymond) that the audience expects the problems to be resolved at all, which makes the delayed gratification of a serial more satisfying. It is also why these serials so often risk losing the interest in their audience if they stop making believable progress toward audience illumination — delayed gratification is fun, denied gratification is not. If you figure out your little brother has taken the prize, it is no longer an enjoyable activity to dig through a box of cereal.

So, The Doctor can’t just get more hopeless as the episode continues. At some point, he has to win, usually after the show has firmly established that he cannot. The moment where this shifts — where the show goes, “Okay, this is how The Doctor is going to win” is what I’m interested in, because that’s where Deus Ex Machina happens.

The next most common way The Doctor wins is by revealing he has superpowers or immunities that you probably weren’t aware of — that for some reason the alien’s mind control device just doesn’t work on him, or that his severed hand has the power to grant superintelligence, or that he can draw strength from people’s belief in him like Tinkerbelle (I love how these aren’t really spoilers, because they’re so arbitrary that it’s unlikely you’ll guess which ending corresponds to which episode).

This is pretty much the same as technobabble, except the Doctor’s body is the machine. It’s even a little worse, because if the Doctor has all these superpowers, there is very little reason for him not to use them more frequently or earlier in the episode. He doesn’t even have to scrounge around for batteries or pipe cleaners or whatever else he needs to reverse the polarity on something.

After that comes the more surprising one — in the reboot of Doctor Who, people kill themselves a lot — especially random featured characters. This isn’t as problematic a plot device as the constant technobabble Deux Ex Machinas (Machinae?) — I love a good “Needs of the many / needs of the few or the one” as much as the next guy. But when you do it a lot, it raises the question of whether you are writing yourself into the same corner over and over again.

Yay, the somebody who needs to die is somebody you don’t care about! Victory!”

It seems a little hollow.

There are spare few episodes that end in a way that doesn’t either kill someone off or introduce new information at the last minute.

And the episode that ends with the realization that Harry Potter’s magic is real is pretty hilarious. But I won’t tell you more about it, because that one would be a spoiler.