“The oldest and strongest emotion of mankind is fear, and the oldest and strongest kind of fear is fear of the unknown.”  So opens H.P. Lovecraft’s 1927 essay “Supernatural Horror in Literature.”  To quibble with Lovecraft about horror is surely a sucker’s game, but I think he’s only half right here.  Lovecraft’s own stories all have a central “unknown,” but the best and scariest of them are always the ones where the big reveal comes not as a shock but as a confirmation, not a “WTF?” but an “I knew it!”  So I’ll emend his definition:  The oldest and strongest kind of fear is fear of that unknown which we realize, in the moment of unveiling, that we knew all along.  Of course, it’s a tricky line to walk, which is why truly successful horror is such a rarity.  Telegraph it too much, and the audience will laugh at you.  Too little, and you end up with the Double Shyamalan, a twist ending that’s so out-of-left-field that the audience simply rejects it.  To get it right, you have to get your audience to realize the secret subconsciously while remaining consciously oblivious.  Now, I’m not going out on much of a limb by saying that the subconscious plays a role in horror.  Most scholarly analyses of horror claim that the supernatural unknown illustrates a Freudian concept known as “the return of the repressed.”  What the rational mind refuses to deal with – sexual desire being the big one, although in Lovecraft’s case it was racism – will bubble back up again as a bug-eyed monster.

Curious what all this has to do with Ghostbusters?  Me too!  Let’s click through to the next page together, friends.
Like most good horror comedies, Ghostbusters makes a good-faith effort to be an effective horror film, but it’s quite unusual in that the struggle between rational thought and the repressed unconscious is specifically dramatized.  Once the repressed has returned, a group of professional rationalists (remember that they start out as academics) show up to actively contain the repressed by using the tools and discourse of science.  It’s not completely unique in this – Bram Stoker’s Dracula (as opposed to Bram Stoker’s Dracula) does the same thing, as does a somewhat atypical Lovecraft story called “The Shunned House” – but neither of these are as screamingly obvious as Ghostbusters.  Consume enough popular culture, and you can draw up a list of crude binary oppositions related to the subconscious: 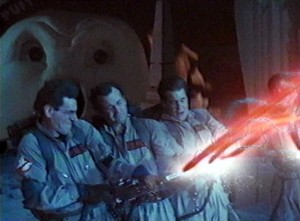 Of course, the homoerotic implications of this are a whole other post.

In the subtext of any given horror movie, you usually get a couple of elements from column A placed in opposition to a couple of elements from column B.  Now check out how it plays in Ghostbusters:  you get a bunch of rational modern American (Canadian, but who’s counting) heroes opposed to an ancient irrational supernatural foreign menace.  And that’s not the subtext, that’s the freaking plot!  Beyond that, note that the ghosts are disgustingly “bodily” (dig that slime!).  Note that Gozer the Gozerian first appears as supermodel Slavitza Jovan, while the Ghostbusters are all men who fight the ghosts with their phallic science-sticks.  It’s pretty Freud-tastic, in fact, I’d go so far as to say Freud-riffic.  But there’s something else going on, too.

Ghostbusters opens with a great, subtly bizarre crane shot that swoops down on the front of the New York Public Library (Humanities and Social Sciences Research Division, if you’re nasty) and winds up staring upwards from beneath one of the iconic lions.  We’re told emphatically that this is a horror movie by Elmer Bernstein’s splendid soundtrack, which, with it’s moaning theremin lines, hovers right on the edge between spooky and “spooky.” If you’ve seen the movie – which at this point, we all have –  you’ll recognize this as foreshadowing for the role that animal statues will play later on, but on the first viewing, it’s just a dramatic shot of a library.  Even on a second or third or fifth viewing, you might want to ask yourself:  why choose the library lions as opposed to any other statue? The answer is that libraries are actually kind of scary:  having the first supernatural scene take place in a library works in a way that saving it for Sigourney Weaver’s fridge would not.  Your mileage may vary, of course, but walking into a really great library (of which the NYPL is certainly one) engenders a little frisson… call it fear, or awe, or vertigo, or anything else, but something in the nervous system gives a little twitch, which the filmmakers exploit wonderfully here. 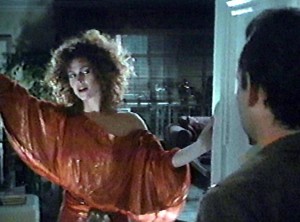 There is no Dana, only backlighting. Actually, all of these shots are backlit the heck out of.

Consider the film’s most famous line by a long shot, “There is no Dana, only Zuul.”  Of course this is hilarious, but it sticks with us because it’s also legitimately eerie.  And what makes it work is that it’s still manifestly Sigourney Weaver reading the line, so we know that the bodily aspect of the character is still Dana.  It would be much less creepy if it was a big ol’ demon dog thing delivering the line.  Even then, the words “there is no Dana” would give the game away – obviously there is a Dana if you feel the need to say that, pal – and make the line a little creepy.  The least creepy possibility would just be a demon dog saying “There is only Zuul.”  Given that the terror dogs themselves are actually pretty awesome looking, this is worth pondering.

In Greek myth, we are told that Zeus would appear as a bull, or a swan, or whatever because the majesty of his true form would destroy any mortal who beheld it.  Presumably Gozer the Gozerian, who is actively trying to destroy the Ghostbusters, has a different reason for needing a form to manifest.  Bill Murray tries to foil Gozer’s plan by ordering his friends to avoid conscious thought, but Aykroyd can’t keep his brain in his pants, and as a result the dreaded Stay Puft Marshmellow Man is born.  Again, there’s some actual horror here, and again this is worth some thought.  If Lovecraft’s dictum is true, and the unknown is always scarier than the known, why is the goofy looking marshmellow man, who is literally KNOWN by one of the characters in the most literal sense possible, so much more frightening than, say, Godzilla?

What do these have in common? I’m glad you asked, heading text!  Let’s break it down.  The first example derives horror from writing.  Libraries remind us that human knowledge can be separated from human subjectivity: there’s something faintly obscene about all those books just sitting around with no one reading them.  The second derives horror from language:  the idea that the same actress can be both Dana and Zuul implies that changing something’s name can change it’s entire identity, or more simply, that the symbolic representation of a thing is independent of the thing-in-itself.  Finally, the third example derives horror from mere signification.  The Ghostbusters aren’t fighting evil in the last scene, they’re fighting a symbol plucked from Dan Aykroyd’s mind to stand in for the fearsome Thing which his mind could not represent.  The Stay-Puft Marshmellow man is frightening precisely because the representation is so inadequate to that which it represents. 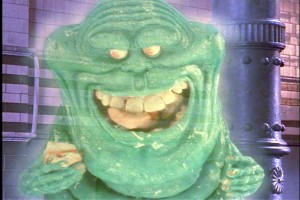 All of these scenes, then, are about the horror of symbols gone wrong: too numerous, too powerful, or too weak.   This underlines an important point about the subconscious:  if you think you’re conscious of your subconscious thoughts, they aren’t subconscious anymore.  Our own repressed subconscious can never truly appear in a horror film, or at least not to us.  But we are sometimes aware – and are usually frightened by – the boundaries and limits of conscious thought.  This is what these scenes in Ghostbusters access:  not the Freudian Subconscious, but the Lacanian Real, which Slavoj Žižek vividly describes as the pulsating, liquescent flesh beneath the shell of an insect or a mollusc, unwholesome precisely because it has no shape of its own.  Everything that we experience, we experience through symbols, but in the boundary regions, where symbols are excessive or inadequate, where a remainder or a gap can be felt… there Slimer dwells, always hovering just outside our field of vision, unknown but constantly known-all-along.

The Lacanian reading also offers another explanation for the crossing of the streams.  One thing that Belinkie didn’t mention in his otherwise excellent post is that, for all that it’s a horrific risk of human life, crossing the streams works as a narrative device.  It satisfies in a way that few horror movie final showdowns can… certainly more than the “oh, let’s just squirt him with goo” finale of Ghostbusters II does, and certainly more than if they had simply disposed of Gozer using the same old zap n’ trap method that they had used on more prosaic ghouls.  Of course, part of this might just be because the device of crossing the streams is a well-aimed Chekhov Cannon.  But remember that throughout the movie, ghosts have been captured using various metonymies of science.  Science is an important part of Lacan’s Symbolic Order (along with conscious thought, language, legal codes, and the patriarchy in general).  But just as the Real has no existence apart from the crumbling absence we feel at the fringes of rational thought, the Symbolic Order (i.e. rational thought itself) is only an arbitrary structure imposed on the undifferentiated chaos of existence.  Or to put it another way, every rational system is based on irrational axioms.  (That whooshing noise you hear is our scientist-in-residence drawing in breath to scream profanities in my ear.  Pay it no mind.)  If you’ve ever had a conversation with a child about science, you’ll know what I mean:  if they ask “Why?” enough times, you’ll eventually have to fall back on “because I said so,” or some variation of the same.  Thus, the final scene of Ghostbusters.  The crucial point to remember is that we have no reason to believe that crossing the streams will work.  This should be a weakness, but because our science-heroes are struggling against the limits of rationality itself, an arbitrary tactic is the only tactic that we will accept.  It will work, in the film and as storytelling, because Egon Spengler, Man of Science, has told us that it will work (because he said so), and this too, is what we have somehow always known.

4 Comments on “The Real (Symbolic, and Imaginary) Ghostbusters”