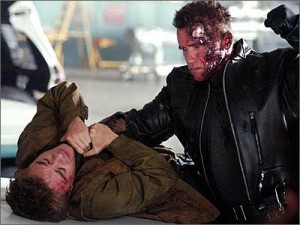 I don’t want to spend too much time on T3, since it’s widely regarded by fans as an aberration to the “real Terminator” for a couple of main reasons: 1) James Cameron was not involved in the project and 2) “no fate but what we make” was replaced with “Judgment Day is inevitable.” The latter is a clear thematic and storytelling departure from T2, but the former reason actually plays perfectly into the determinism of movie economics argument that these sequels are virtually inevitable. Not even James Cameron’s absence could stand in the way of this sequel. There was still value in the franchise, and Arnold was still game. A sequel was going to get made. It was fate.

And it was made. And as the franchise was fated to eventually suck, it did suck. James Cameron at the helm might have delayed the onset of suck, but he was nowhere to be found for this one. Judgment Day, it would seem, is actually inevitable.

Terminator had arrived on TV, and though plenty of fans were nervous, everyone seemed to be relieved that the creators were setting out to undo some of the damage wrought by T3, particularly on this whole “no fate” business. Sarah Connor’s opening monologue from Season One pretty much sums it up:

Today we fight to stop Skynet from ever being created. To change our future. To change [John Connor’s] fate. The war to save mankind begins now!

I was a fan of this show. It certainly had its faults, but for the most part, it did make its own narrative fate by telling some unique stories about Sarah and John’s relationship rather than rehashing the same territory of T2 and T3.

But that wasn’t enough to stave off a particularly cruel twist in the story of “No Fate But What We Make.” As the show slid in the ratings towards cancellation, fans of the series conducted a grassroots campaign to convince Fox to keep the show alive:

This to me is the perfect example of how Terminator fans (like myself) really took the “no fate” message to heart. To them, the “we” in “no fate but what we make” refers to the scrappy band of underdogs (John, Sarah, and their human/cyborg protectors) who struggle to make the world a better place in the face of impossible odds. When you’re fighting to save a TV show with low ratings, it’s easy to see the appeal in this idea, especially when it’s the central message of the very TV show you’re trying to save.

But then it turned out that “we,” the scrappy band of underdogs,  could not make the fate of our choosing. Others–the millions of Nielsen households, the harsh economics of TV ratings and ad revenue–had made that choice for us. There is a fate other than what we make for ourselves. We don’t control everything.

That’s not entirely fair. Terminator: Salvation was shitty, yes, but it wasn’t a random act of shit happening. It was fate that brought us to this point. The fate that started back in 1984, the moment that T1 became a certified hit worthy of sequel. All franchises eventually deplete the well. Some can be rebooted, but I doubt Terminator can ever get the “true” reboot it needs to escape from the wreckage of the last two feature films. The weight of the mythology–robots with metal skulls and red eyes, time travel, the strength of the Sarah Connor character, and of course, “no fate”–are in total too burdensome for any future stories to truly break free.

Oh, and there’s the obvious final undermining of “no fate:” by setting the story in the future war, the filmmakers once again present a Terminator world in which Judgment Day definitely, unarguably happened. “No fate but what we make” was always meant to leave the future–the post Judgment Day, Skynet infested future–undefined and open to prevention. T:S defines the future and essentially throws “no fate” out the window. With a big robot arm that comes crashing through the ceiling.

In conclusion, I do want to clarify that although I have subjected Terminator and the “no fate” ethos to far greater scrutiny than I thought I would have originally, and that I come away with  a diminished opinion of “no fate” specifically, I still have the same level of love and appreciation for T1, T2, and T:SCC that I had before I embarked on this exercise. Sure, “no fate” and time travel start to fold pretty quickly upon Overthinking, but that doesn’t detract from a great story with great characters that an audience feels invested in.

Nevertheless, I do think that fans’ fixation on “no fate” as some sort of Terminator doctrine is ultimately self-defeating, and that the franchise as a whole, like most movie franchises, has been subject to powerful macroeconomic forces that led to its inevitable decline in quality.

Readers: what do you think? Am I making too big of a deal out of this? Am I stating the obvious when I say that “no fate” is a shaky concept in Terminator? Is there really no fate but what we make? Sound off in the comments. If you’ve read this far…then you really are The Resistance.

30 Comments on “No Fate But What We Make: The Greatest Terminator Lie Ever Told”