[Update: We discovered that these two movies have a stunt driver/second unit director in common! There MUST be a connection, right? Read more in Part 2.]

What if I were to tell you that the much-maligned sequel to Grease, Grease 2, partially inspired the sci-fi classic Terminator 2? More specifically, that the character of the Cool Rider/Michael Carrington is the inspiration for the T-1000 in his motorcycle cop stage?

As evidence, I’d point to the eery similarities in the characters’ distinctive headgear and reflective eyewear: 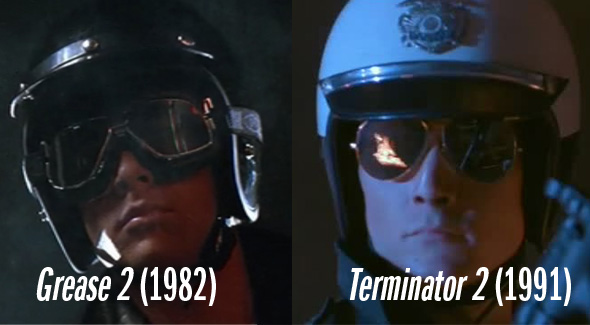 …and the liquid nitrogen sequence from Terminator 2:

Here are a couple of representative stills in case you can’t watch the video clips: 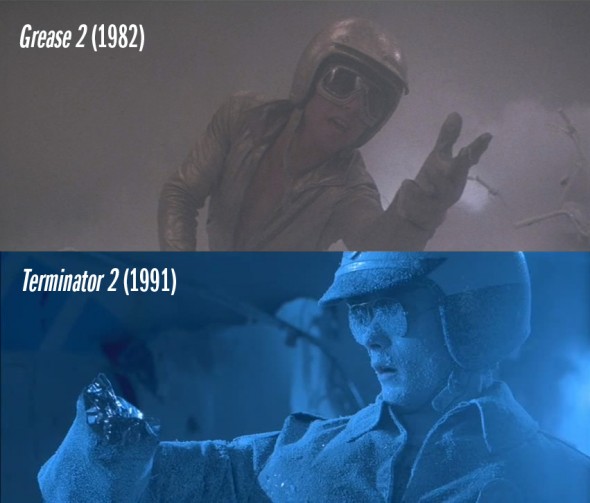 If, after seeing this evidence, you were still skeptical, I’d then point out that nowhere in the extensive literature of Terminator Studies is there any documentation for the inspiration of the T-1000’s motorcycle cop look. (Wikipedia, IMDB, The Terminator Wiki, and the Terminator 2 DVD commentary track are all silent on this issue.) I’d then say that, given this visual evidence of the Grease 2 – Terminator 2 connection and the lack of any evidence to the contrary, this theory must be correct.

If I were actually trying to sell you on this theory, then that’s what I’d do. But I’m not, because that would be silly. More precisely, if I did try to advance this theory of the Grease 2 – Terminator 2 connection using the evidence and arguments presented above, I’d be guilty of two sins against logical reasoning.

We can probably all agree that the most likely explanation is coincidence. If you’re a filmmaker trying to add an aura of dehumanizing mystique to a motorcycle-riding antagonist/protagonist, there are only so many ways to do that. Covering the face with a helmet and covering the eyes with eyewear are two really obvious and effective ways of accomplishing this, and there are only so many combinations of helmets and eyewear that make sense for a 50’s greaser or a motorcycle cop.

But where’s the fun in that? Let’s put logic and reason aside and reconsider my outlandish theory for a moment. I consulted every Terminator 2 knowledge source at my disposal to try to find some documentation on the origins of the T-1000’s motorcycle cop look (as the T-800 would say, “I have detailed files”), and I came up empty. That leaves me with gaping uncertainty as well as the tantalizing possibility that this could still be true: that Grease 2 did in fact inspire Terminator 2. Remember that I said this theory can’t be proven as true or untrue given the current body of public knowledge of Terminator 2.

What if we were to expand that body of public knowledge?

What if someone who was involved in the production of Terminator 2 could step up and confirm the inspiration for the T-1000’s motorcycle cop look?

This is not that outlandish of a request for information. I’m not asking Quentin Tarantino to tell us what was in the briefcase in Pulp Fiction. I’m not asking Christopher Nolan to tell us if the top falls over at the end of Inception. I’m just asking for a small piece of information on the creative process that is ultimately inconsequential to the experience of watching the movie.

It’s also not that outlandish to expect a reply. Given the reach of this site, we stand a decent chance of getting the attention of the right people. Just a few days ago, the creator of My Little Pony: Friendship is Magic weighed in on our theory that the show is an allegory of  Plato’s Republic:

@VeerleTakino Completely unintentional. I think the name of the site is rather dead on in this case.

And a few months ago, we had Michael Gross, the creator of the Ghostbusters logo, join us for a podcast episode to discuss the creative process behind the logo (and his illustrious film career).

Now, I’m not expecting James Cameron to weigh in himself, but I am earnestly asking for anyone who was involved in the production of Terminator 2 to come forward with information, and for you, the readers, to help by sharing this article far and wide.

I’ll be sure to share any responses as soon as I get them, but in the meantime, feel free to weigh in on this theory in the comments!

Read Part 2, which includes a response from Gary Davis, who was the stunt motorcyclist in Grease 2…AND a second unit director on Terminator 2. Robert Patrick, who played the T-1000, also weighs in.

13 Comments on “The Grease 2 – Terminator 2 Connection”