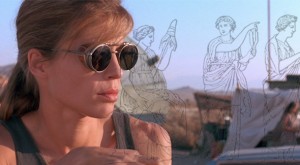 These have been difficult days for me. As a die-hard Terminator fan, I went into a screening of Terminator: Salvation knowing that the movie was getting bad reviews, but still holding onto a sliver of hope that this latest installment to my beloved franchise would remain true to the “real” Terminator and right the many wrongs of Terminator 3: Rise of the Machines.

As we all know now, the movie was a sloppy, shoddy disappointment (you can listen to me rant about its shortcomings in this podcast episode; I won’t retread that territory here). That disappointment was bad enough, but in the ensuing weeks after seeing Terminator: Salvation, an even worse thing happened: I came to the sad conclusion that a huge part of the Terminator ethos, the franchise’s mantra and guiding light, is one big fat lie:

“No fate but what we make.”

For years, I fooled myself into holding onto this phrase like some sort of holy writ, but now, at this nadir moment, I must recognize the truth: “no fate but what we make” is demonstrated poorly at best by the movies/TV shows–even in the greatness that is Terminator 2–and flat out contradicted by the meta-narrative of the franchise.

[Before I dive into this, I will say up front that I don’t want to get caught up in the twisted logic of Terminator’s time travel. Plenty of others have covered that ground, and any attempt at trying to reconcile the effects of time travel on the various time lines presented in the movies and TV show always ends in a convoluted mess. This is not an Overthinking of time travel. It’s an Overthinking of the meaning of “no fate but what we make.”] 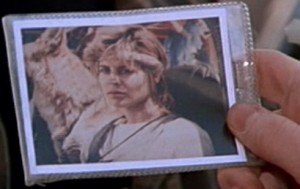 It’s interesting to note that the phrase “No fate but what we make” is never uttered in this movie. It’s in the original script, but was cut out either in production or in editing. Nevertheless, in the final version of the film, John Connor’s message to Sarah, as relayed by Kyle Reese, does contain the phrase “the future is not set.” But even at that moment, the birth of the franchise, this concept stands on shaky ground. The photograph of Sarah and the dog in the Jeep from the future is recreated in the present exactly as it would appear in the future. As if the photograph was just meant to be…by fate. Sarah Connor, in recording messages to her unborn son John, assumes that in the future, Kyle must travel back in time in order for John to be born and, in turn, for John to save humanity in the future. Again, sounds a lot like fate to me.

No fate but what we make? Only if the “we” in this case is the millions of moviegoers in 1984 that chose to make Terminator a hit movie instead of, say, Dune. The film’s only shot at advancing the “no fate” cause was lost the moment the film became a box office hit. This was the crucial point when the determinism of movie economics took over. Risk-adverse studios will take virtually every hit movie that lends itself to a sequel (and even some that don’t) and do pretty much whatever it takes to make that sequel happen.

Granted, there are some exceptions to the rule, but Terminator was not to be one of them. Its low-budget beginning gave plenty of room for the franchise to go in terms of effects and production value. James Cameron and Arnold Schwarzenegger were both on board, but as we’ll see, the power of determinism of movie economics is so strong that even their absence couldn’t stop further sequel production.

From this point, a different kind of determinism took hold. Call it peak theory; call it the franchise life cycle; call it what you will. It is simply impossible to sustain a high level of quality for a movie franchise beyond a small handful of films, especially when its first installment is as unique and iconic as the original Terminator film.

The success of the first Terminator movie sealed the franchise’s fate. It would eventually come to suck. Big time.

But we’re not there yet. Terminator 2: Judgment Day is widely regarded as a true cinematic achievement, a masterpiece sci-fi action movie. And part of the movie’s genius is the importance of “no fate but what we make.” It’s the perfect optimistic counterbalance to the titular Judgment Day, the nuclear holocaust that lies somewhere over the horizon. Compared to the first film, which uneasily and unevenly approached the “no fate” doctrine, the second film seemed to fully embraced the idea of “no fate.” For starters, the line “no fate but what we make” is actually spoken in T2 (and carved into a table with a knife), but more importantly, the plot focuses on the Connors and the Terminator blowing up Cyberdyne to prevent Judgment Day. To change the future. To make their own fate. And they succeed, right? Didn’t we get the thumbs up, A-OK at the end? Didn’t we get an oh-so-symbolic view of an open road as the last visual of the movie, showing that any future, any fate, could possibly be out there? Isn’t this all part of James Cameron’s master vision?

Not quite. The original script called for a “happy ending” to T2. They even filmed it. If you haven’t seen this before, be warned: this may permanently change your perception of Terminator and the notion of “no fate” as some sort of holy writ that sprang fully formed from James Cameron’s skull:

August 29, 1997, came and went. It’s the year 2027. John Connor became a Senator. Sarah Connor got old, though she still retained her habit of speaking ominously into a tape recorder. Clearly the original intent was to show one more time how “no fate” and “change the future” won the day, but in effect, it runs directly against that. This scene is closure and finality: the polar opposite of “no fate.”

I can’t find any documentation to back this up, but I’m pretty sure the open road ending won the day because it’s more conducive to sequels. It may seem ironic at first that the determinism of movie economics helped bring about the more effective “no fate” ending, but it’s actually quite fitting with the way that the Terminator franchise repeatedly undermines the idea of “no fate.”

[Continued on next page]

29 Comments on “No Fate But What We Make: The Greatest Terminator Lie Ever Told”