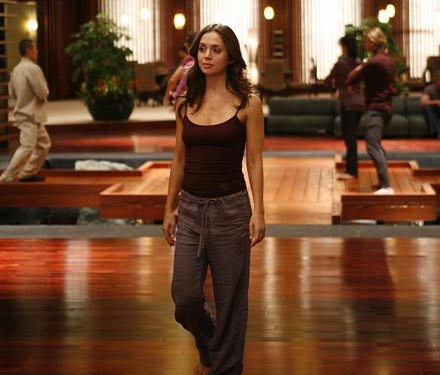 It’s been weeks now since I first sounded off about Dollhouse. In my first post, I was pretty hard on the show, claiming that it was unpleasant to watch, and would probably be cancelled no sooner than it deserved.  My main complaint was the lack of likable characters who liked each other, which I still maintain is Joss Whedon’s main (only?) strength as a creator.  I speculated that the show’s heady premise—a house full of brainwashed supermodels who, for a price, can be programmed with any personality and skill set—would preclude the development of any lasting relationships between characters.

The season finale of Dollhouse aired on Friday, and while the fan base waits eagerly to find out if it’s been canceled or not, I thought it might be nice to revisit the series.

I was wrong about the most important point:  as a whole, Dollhouse was not a catastrophe.  It had weak moments, to be sure… considering how much experience Whedon et. al. have as writers, I was surprised to come across so many tone-deaf, embarrassing pieces of dialogue.  But there have also been a lot of genuinely nice moments.  I enjoyed watching FBI agent Tamoh Penikett’s fall from grace, starting as a Mulder-esque crusader against the Dollhouse in the first episode, going to an unemployed civilian who uses the Dollhouse’s services (he’s forced into it, so we can still think of him as a “good guy,” but still), and finally a Dollhouse employee.  And one of the season finale’s bombshells – that the Dollhouse’s physician is herself a repurposed Doll – was actually pretty darn cool.

We’ve also had some good talks in the open threads about whether or not the series should be counted as “feminist.”  At the end of the season, this is still very much an open question.  The show certainly deals with the ways society (and perhaps the entertainment industry in particular) objectifies women.  Again the FBI agent character is a standout here… his desire to sweep in on a white horse and rescue Dushku from her tormentors is presented as creepy and patronizing, and what’s more, he knows it.  On the other hand…  Look, the Dolls are all named after letters in the NATO phonetic alphabet.  (Alpha, Bravo, Charlie, etc.)  This is kiiiind of cool, although one wonders what would happen if they ever hired a 27th operative.  But why is it that the female dolls all have “awesome” names like Echo, Tango, and Sierra, while the male dolls have prosaic names like Victor and Mike?  Where are the female dolls with named Juliet and Delta?  Where are the male dolls named Uniform, Papa, and (oh, this could be a controversial episode) Zulu?  Granted, one of the male dolls is named Alpha, and one of the female dolls is named November (which is still a pretty dippy name, but within the realm of possibility).  But they’re both “special.”  Alpha is a psychopath, and November is the girl next door type that we’re supposed to think of as fat even though she’s still in absurdly perfect shape by any rational standard.

And while we’re at it, what’s with having all the dolls, men and women alike, be smoking hot?  Even If the internet has taught me anything, it’s that people’s physical tastes are widely varied.  If there was really a house full of brainwashed pleasure slaves out there, they would run the gamut.  Then again, we’ve only seen the Los Angeles dollhouse, and we’re told that there are others hidden all over the country.  Maybe they just split them up geographically.  Maybe, somewhere in middle America, there’s a house where all the dolls are really really fat.  Here’s hoping the show gets renewed, so it can explore some of these fascinating possibilities.

8 Comments on “Dollhouse: A Retrospective”