So today I decided to cash in my Y chromosome once and for all by going to see Twilight.  First, let me share the song I would have played over the opening credits if I were the director.  Just start the clip and let it run in the background while you read the post.

Was the movie any good?  I’ve got no complaints, although I suppose I should warn you that I’m notoriously easy to please.  Compared to other movies reviewed by this site, it’s neither good enough to merit one of our flagrantly overthought rave-ups, nor anywhere near bad enough to deserve an increasingly histrionic series of pans.  Still, there are a couple of things worth examining here.

I:  The Feminism Issue 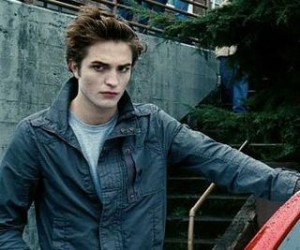 Some people have complained that Twilight reinforces traditional gender roles. This is a pretty easy argument to make:  the power dynamic between Edward (super strong, incredibly rich, kind of a jerk) and Bella (giant klutz, lower-middle-class, apparently finds jerkiness charming) is a little shady. But if you’re going to damn Twilight for this, you’re also going to have to throw out about %40 of western culture.  So long, Beauty and the Beast.  Later, Pretty Woman.  Have a nice life, Pride and Prejudice and Jane Eyre.  This doesn’t mean that we can’t point out Twilight‘s shortcomings, but we should take them with a grain of salt.  And we should give Twilight credit for the one one major challenge it does offer to male chauvinism!  To wit:  Edward is soooooooooooooooo hot.

This isn’t as trivial as it sounds.  It’s not just a question of the actor being dreamy, although I suppose he is; it’s the way that the camera lingers on his face and form (or in the book, the female narrator’s frequent comments to the effect of “OMG he is so beautiful OMG”). Twilight is hardly the first book or movie where a female character is allowed to be strongly attracted to a man, but there are a *lot* of books and movies in which female desire is denied, glossed over, or presented as toxic.  If we’re going to buy into the idea that Twilight will program the subconscious of American girlhood – questionable, but hey, taking stuff way too seriously is kind of our mission statement ’round these parts – then let’s celebrate the good along with the bad. 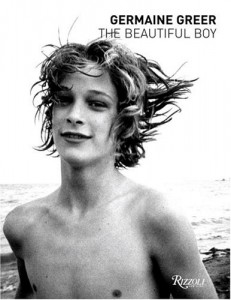 I’m pretty sure Germaine Greer has my back on this.  And is it just me, or does the cover model from The Beautiful Boy bear an uncanny resemblence to Twilight actor Robert Pattinson?

But nothing can excuse the scene where Edward admits that he has been sneaking into Bella’s room to watch her sleep “for a couple of months now,” and she reacts by making out with him.  That’s just creepy.  I don’t care how hot you are.

The author of the Twilight series, Stephanie Meyer, is a Mormon.  This has gotten a certain amount of press, and drawn some interesting responses from Mormon culture bloggers.  Mormonism is exotic enough to the general public that it’s almost impossible not to go hunting for symbolism.  The way this plays out, basically, is to imagine the Cullen family of vampires as an analogue for the LDS church.  They are “different.”  They are “misunderstood.”  They have unusual dietary restrictions (here for “human blood,” read “caffeine”) which separate them from others of their ilk.  And while the pure, noble Cullens live in an isolated corner of the American hinterland (for “Forks, WA,” read “most of Utah”), the blood-drinking vampire mainstream is based in Italy.  You know, where the Pope lives.

Kind of cute, right?  But Utah is no longer the hinterland.  (I’m not sure that we’ve really got one anymore… maybe Wasilla Alaska?)  And in my limited experience, Mormons are about as likely to abstain from caffeine as Jews are to abstain from pork, i.e. not very.  So my little analysis has everything to do with the popular idea of Mormonism, and probably nothing to do with actual Mormons or the Mormon self-image.  Really, I’d be surprised if there was any actual religious subtext to the series at all…  C.S. Lewis it ain’t.  It ain’t even that painfully arbitrary scene at the end of Harry Potter where he goes on a vision quest to the King’s Cross [ahem Cross nudge nudge cough] subway station.  The generalized dimensions of “otherness” that float around the Cullen family do attach rather well to Mormonism, but they also work with any other religion, as would the focus on “restraint” pointed out by the Time article.  Heck, the vampires’ special diet would be a much better symbol for kashrut than for anything that Mormons do.  And although Mormons are agressive prostelytizers, Bella has to spend three and a half books pleading with Edward before he finally [spoiler alert] throws her down on the mattress and gives her a good hard sucking so that she can join his special vampire club.  This again is a lot more like Judaism, if Sex and the City is to be believed (wait, when did I say I traded in my Y chromosome?).

Vampires are outcasts who choose to be outcasts.  They’re super hot, super athletic, and super charming… clearly they could be prom king and queen if they wanted to.  But they don’t want to.  They want to be left alone.  No one understands them.  Theirs is a high and lonely destiny.

Now if you’re growing up as a social misfit – which even the most well-adjusted goth kid probably is – there is something very comforting about this image.  It’s not so much the being strong and charming and handsome part… it’s just the idea that your isolation is important and marks you as better.  Some people map their difference onto vampires, some onto other forms of geekery.  Many map it onto a rigid moral code.  (No one, but no one, is more passionately chivalrous than an awkward teenage boy who hasn’t learned to talk to girls yet.)  All of these strategies allow the misfits to convince themselves that they are rejecting society, not the other way around.  That their destiny is high and lonely, as opposed to just lonely.

So I guess what I’m saying is that vampires have always appealed to a certain set of teenagers.  With Twilight, that set has gotten much larger, but I’m going to theorize that the symbolic utility of the vampire is more or less the same, which just goes to show that, deep down, the mainstream kids are every bit as awkward and angsty as their purple-haired classmates.  That idea of *choosing* to reject the social mainstream is absolutely foregrounded in Twilight.  Some synopses of the story describe Bella as a neglected outsider, but she totally isn’t:  immediately upon arriving in Forks, she becomes the most popular girl in school.  Boys from miles around line up to ask her out, and she makes female friends too.  And she consciously abandons all of this to go be with Edward.

Which means that despite the fact that Twilight goes out of its way to avoid the capes, coffins, and candles school of Vampirism, it is still gothy as the front row at a Sisters of Mercy concert.  If I were a goth kid right now, I would be furious that my subculture had been co-opted.  The mainstream hasn’t just stolen vampires:  it’s stolen alienated posturing. Now dawns the era of the posturing-poseur.

Incidentally, Carter Burwell’s main theme from the Twilight score so reminiscent of The Smiths’ “How Soon Is Now” as to be utterly distracting.  So I’ll leave you with another music video…

(Incidentally, Wikipedia informs me that this cover of the song was originally recorded for the 1996 movie The Craft, making it the official anthem of crappy witch-themed media.)