2) Henry:  Portrait of a Serial Killer 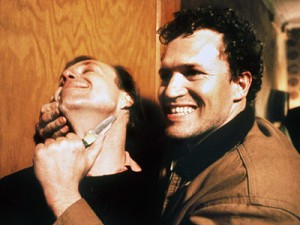 Will this man protect us from Al-Qaeda?

There’s a doctoral thesis waiting to be written comparing this movie to the popular Showtime series Dexter.  Both are about serial killers who are charming and handsome.  Both have their killers make tentative overtures towards humanity through their relationships with emotionally fragile women.  The difference is that Dexter‘s Dexter is heroic, a killer who only murders other murderers.  He’s kind to children and polite to his sister.  Henry‘s Henry is just a fiend.  He kills anyone who gets in his way, he kills people who he picks at random, he kills his enemies, he kills his friends.  Dexter is kind of like Jack Bauer.  He doesn’t play by the rules, but he’s on the right team.  And I think that the show’s popularity comes from the same place as 24’s popularity, or for that matter Batman’s.  We don’t ultimately want our authority figures to be subject to the same laws as everyone else… at least in our fictions. 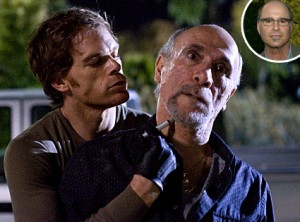 I scoured the net for a picture of Dexter holding a knife to a guys throat, to match the picture of Henry, but this is the closest I could find. Eh, you get what you pay for.

Think back to that image of the slasher villain as a father figure (alluded to in yesterday’s post on The Stepfather).  The serial-killer hero is the perfect example of this:   Dexter is the ultimate in “my dad can beat up your dad.”

Anyway, if Dexter is like Jack Bauer, Henry is Dick Cheney.  We desperately want him to reveal a common humanity, to use his killing skills for good, to punish the wicked and reward the righteous.  The filmmakers tease us with this, throwing one loathsome SOB after another into Henry’s path, so that we can cheer as he calmly rubs them out.  But at the end of the day, he’s still a monster, and the specifics of how this plays out are both hideous and heartbreaking.  A film like Henry is probably a necessary tonic to shows like 24.  But like any medicine, it is bitter, and profoundly hard to swallow.