There exist within the horror genre certain films that are concerned less with scaring you than with making you question the essential goodness of mankind.  I don’t really want to write about most of these movies, because it means that I have to think about them.   Nevertheless, if you want to kick your Halloween off with a bang – or you just enjoy counting gross-out coup with friends – you’ll want something from this list.  Of their uniquely loathsome kind, these are the most perfect examples that exist. 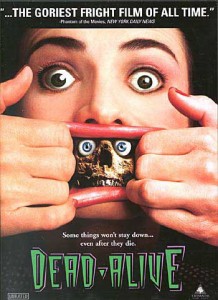 This image has nothing in particular to do with the moive, btw.

This gonzo kiwi zombie movie is actually pretty tame for this list, and that’s despite the zombie sex scene, the zombie baby, the disembodied zombie gastrointestinal tract, and the infamous “lawnmower” and “ear in the soup” scenes.  Peter Jackson invests the proceedings with a dose of levity and humanism, and the central love story is just too sweet for words.  Plus, where else are you going to find a kung-fu fighting priest who dives into the thick of a zombie uprising while shouting “I kick ass for the lord!”  And yet… the various puppet effects ARE decidedly unpleasant, especially the aforementioned zombie gastrointestinal tract and the slow disintegration of the protagonist’s mother.  And just when you think there’s nothing Jackson can do to gross you out physically any more (the lawnmower sequence required fake blood to be pumped onto the set through a fire hose), the climax of the film takes a startling left turn into psychologically disgusting territory.  I don’t want to spoil the surprise, so suffice it to say that it is very surprising.  And gross.  Definitely gross. 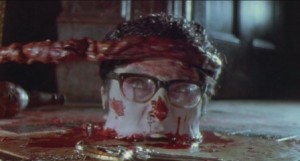 In the aftermath of the lawnmower scene.

On the whole, Dead Alive is a remarkably enjoyable film, so much so that I do sometimes sit down and watch it again.  I always think I’m ready for that ending – that it will have lost it’s power over me.  So far, it hasn’t.