[As we count down to Halloween, Overthinking It presents you with a guide to some of the best in horror, compiled by our resident master, Stokes. –Ed.]

At first we were just going to do a top ten list… but after three rough drafts, I got tired of comparing apples and oranges.  Is Murnau’s atmospheric classic Nosferatu a better horror film than Hiltzik sublimely, uh, campy Sleepaway Camp?  Well obviously it is (by most rational standards of goodness)… but that doesn’t mean I’m necessarily going to slap it in the DVD player at my Halloween party.  So instead of one top ten list, we’re bringing you four top fives, beginning with the horror comedy.

A couple of notes on the selection process:  I didn’t bother putting Evil Dead 2 or Army of Darkness on the list, because I couldn’t figure out anything to write about them.  Suffice it to say that if you haven’t seen them already, you should do yourself a favor and add them to your netflix cue.  I also disqualified all movies that are unintentionally funny, like the infamous Plan Nine From Outer Space.  In my experience, these movies might make you laugh, but they don’t make you happy.  That much failure crammed into 90 minutes is never anything but depressing. Now on to the winners! 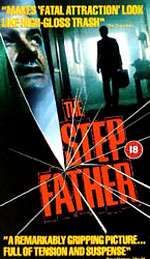 Some people will tell you that all horror movies from about 1970 on have been all about demented father figures trying to exert control over their surrogate families.  The Stepfather seems to have been made by these people.  That means that instead of Michael Meyers (representing the parents, or at least the patriarchy) chasing down and punishing a bunch of horny teenagers (representing his “children”), we get an actual father figure menacing his actual (step)child.  The titular Stepfather is a man with some simple needs and desires.  All he wants is the perfect suburban life:  a house, a wife, a job, and some adorable little kids.  If something gets in the way of his dream, he reacts… badly.  And the problem with adorable little kids is that before you know it, they’re bratty little teenagers, running around at all hours of the night, accusing you of murder, and kissing boys. Something will have to be done.  We need a little order around here, dammit! 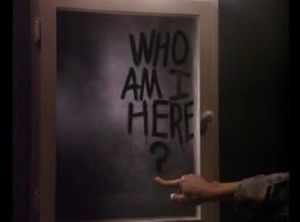 Writing "Who Am I" on a bathroom mirror would be bad enough, but that last word is a doozie.

The plot alone would push the movie’s symbolism waaay over the top.  Obviously this is a coming of age tale about a child growing away from her controlling father, only now the father is a stepfather (to make it psychologically acceptable to the mass audience), and he has a knife (to make it awesome).   But the movie doesn’t stop there.  No, this movie needs to highlight the girl’s journey to young adulthood by dressing her like a toddler in the earliest scenes and gradually skankifying her outfit throughout the film until in the final confrontation she winds up entirely nude.  This movie needs to have the villain put a tiny replica of his suburban dream mansion on a twenty foot pole in his front yard:  it’s ostensibly a birdhouse, but it’s actually a convenient way for the filmmakers to shout “THIS CHARACTER REINFORCES THE MALE-CENTRIC MALE-OCRACY!”  In short, this film wants to have its symbolism and eat it too.  It’s hilarious fun.

Random Trivia:  I’m sure that Terry O’Quinn (aka Locke from Lost) isn’t exactly burning up the server space over at the celebrity nudity database.  Nevertheless, I’m sure there are a couple of people who will be excited to know that he totally shows his penis in the first, like, sixty seconds of this movie.

2 Comments on “Five Horror Films That Will Leave You Gleeful”