[Ho-ho-ho, Overthinkers! To get us in the holiday spirit, here’s an interesting analysis of The Nightmare Before Christmas from guest writer Justin Bortnick – Ed.]

‘Twas a long time ago, though not as long as it seems,
in a year we refer to as 1993.
But the story that you are about to be told
has been kept locked away since that time of old …

Tim Burton’s The Nightmare Before Christmas has been a family favourite for the period between October and December for nearly two decades. The story of Jack, the Pumpkin King of Halloween Town, and his attempt to commandeer control of Christmas from Santa Claus, the jolly ruler of Christmas Town, has worked its way into the hearts of children and adults alike. The franchise has become a marketing juggernaut, selling apparel, mugs, keychains, and every other product imaginable onto which characters’ faces might be plastered. The story of the film seems straightforward enough: Jack, tired of the monotony of Halloween, stumbles across the existence of Christmas. Jack arranges for “Sandy Claws,” as he refers to Santa, to be kidnapped so that he might take over the holiday for a year. “Consider this a vacation Sandy, a reward. It’s your turn to take it easy,” Jack explains to a protesting Mr. Claws. As a squirming Sandy is dragged away, it is clear that he is not at all pleased with the hijacking of his holiday – or is he? As we will soon uncover, Sandy Claws was not only complacent in his own kidnapping, but knew it was coming before it even occurred.

As the Coots/Gillespie Christmas standard “Santa Claus is Comin’ to Town” tells us, Santa “knows when you are sleeping, he knows when you’re awake.” In order to achieve his momentous task of delivering presents to all of the world’s good children in a single evening with any sort of accuracy, Santa needs to have almost godlike omniscience into the activities of the people of Earth. How else would he be able to know which children deserve gifts come Christmas morning? If one accepts the omniscient Santa argument, it must follow that Mr. Claws has full knowledge of Jack’s plan ages before he is kidnapped. Jack certainly makes no attempt to hide his efforts, even replacing the “Days To Halloween” counter in the centre of Halloween Town with one labeled “Days To Christmas.” Sandy has been at the job of “making Christmas,” as Jack puts it, for a long time. Sandy’s modern aspect dates to at least the early 1800s, which means he’s been at it for about two hundred years without a break. Is it so difficult to imagine, then, that when offered the chance at a vacation by another holiday professional such as himself, he would spring at the opportunity? 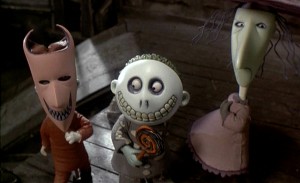 Some might argue that while Sandy Claws does indeed possess the all-knowing powers which are ascribed to him above, his pansophy only applies to the activities of children, and not to those of adults such as Jack Skellington. At this point it is important to examine who exactly Jack sends to kidnap Sandy Claws. Apart from a young corpse boy, Lock, Shock and Barrel are the only children seen to live in Halloween Town. They are the only citizens known to engage in uniquely childlike activities, being the town’s trick-or-treaters. These three are certainly on Sandy’s “naughty” list, as their primary employer is the film’s villain, Oogie Boogie. The moment Jack instructs them to kidnap Christmas Town’s jolly patron, the proverbial cat is let out of the bag. Sandy knows exactly what their plans are, and the fact that these three children were on their way to his home. Indeed, the first time Sandy appears on-screen, he is in the process of double-checking his naughty/nice list, commenting on how there are barely any naughty children this year. Obviously those names that are naughty will stand out even more due to their rarity.

With the information in his possession, Sandy is ready for Lock, Shock and Barrel’s visit. The movie displays them jumping towards him with a large sack, and a cut to black. The next time we see them, they are returning to Halloween Town with Sandy in tow, trapped within the bag. Let us compare, for a moment, the relative sizes of these characters. The trick-or-treaters are diminutive, while Sandy is large both in relative height and girth. Furthermore, Mrs. Claws has just been shown to be in the next room, preparing food for Sandy’s Christmas flight. Surely, she would have heard the scuffle if there had been any true resistance from her husband. The only way that Lock, Shock and Barrel are able to achieve their feat is if Sandy allows them to do so.

When, at the climax of the film, Jack successfully defeats Oogie Boogie and rescues Sandy Claws from his clutches, Sandy puts on a large show of being angry. He fumes about how nothing in Halloween Town makes sense, and how it is a good thing that he’s Santa Claus, because he’s the only one with the ability to set things right. However, he is not angry about being kidnapped. If he is upset at all, more about the disruption of his vacation due to Jack’s poor management of Christmas. His tantrum is revealed to be a façade when, a few minutes later, he flies over Halloween Town, giving it the gift of its first-ever snowfall. Sandy recognizes that despite Jack’s failure to provide him with a restful experience, the attempt was pure, and rewards the Pumpkin King’s efforts.

The final and perhaps strongest piece of evidence comes from the epilogue. The scene, while cut from the film, was included on both the original soundtrack issued by Disney and the 2008 album “Nightmare Revisited,” where Disney collaborated with various popular artists to produce a 15th Anniversary cover album. The closing, as with the opening, is a poem narrated by Sandy Claws, and provides one last look at Jack and Sandy many years after the film’s events. The poem reads as follows:

And finally, everything worked out just fine.
Christmas was saved, though there wasn’t much time.
But after that night, things were never the same–
Each holiday now knew the other one’s name.
And though that one Christmas things got out of hand,
I’m still rather fond of that skeleton man.
So, many years later I thought I’d drop in,
And there was old Jack still looking quite thin,
With four or five skeleton children at hand
Playing strange little tunes in their xylophone band.
And I asked old Jack, “Do you remember the night
When the sky was so dark and the moon shone so bright?
When a million small children pretending to sleep
Nearly didn’t have Christmas at all, so to speak?
And would, if you could, turn that mighty clock back,
To that long, fateful night. Now, think carefully, Jack.
Would you do the whole thing all over again,
Knowing what you know now, knowing what you knew then?”
And he smiled, like the old pumpkin king that I knew,
Then turned and asked softly of me, “Wouldn’t you?”

Here we see that despite the passage of time, and the fact that their actual contact with one another in the film was exceedingly brief, Jack and Sandy have remained friends, to the point where if they were given the opportunity, they would repeat the events of the film again.

With the evidence lined up as it is, there is almost no other conclusion that can be drawn save that Sandy Claws, in an attempt to take a much-needed vacation from the stress and effort required to manage a holiday as large as Christmas, was a willing participant in his own abduction. He slyly used his foreknowledge of Jack’s plans to escape his duties: he could never take a break on his own, but under the guise of a kidnapping, he could easily skip off for a bit. Read this way, the film becomes a web of deceit and manipulation, where Sandy Claws, the ultimate puppet master, pulls every character’s strings.

Justin Bortnick is a bumbling but good-natured literature-type currently stationed in the American northeast. He spends most of his time lost inside of dusty tomes or writing short creative works. If you find yourself simpatico with his particular brand of weird, you can follow him on Tumblr or Twitter. 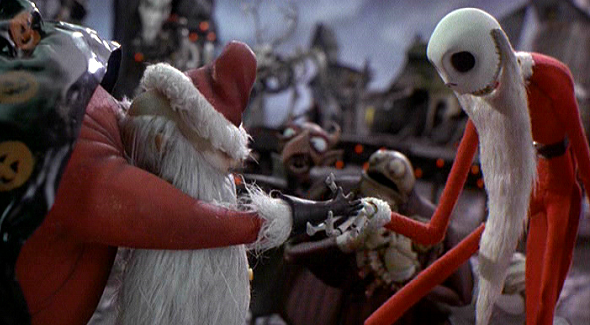 [What do you think, Overthinkers? Was Santa Claus shirking his elven duty to the children of the world? Or was he suffering from ‘Stockholm Syndrome’ in his quick forgiveness of Jack? Sound off in the comments! – Ed.]

13 Comments on “The Claws Conspiracy”