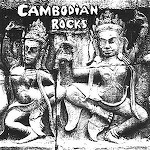 In the mid 1960s, Cambodian musicians began to combine the scales and instrumentation of traditional Khmer music with surf guitar, farfisa organ, rock beats and balls-out vocals, all drenched with echo and distortion. The result is quite simply the most exciting garage rock I have ever heard. Audio files after the jump.

Flash forward to today (well, to late 2007): WFMU’s Beware of the Blog has posted mp3s of an entire album of the stuff. The copyright status of this music seems to be up in the air: given what Cambodia went through in the late 70s, it’s a wonder the recordings survived at all. The astounding voice on the second track posted above belongs to Ros Sereysothea, the biggest female star of her generation. She was imprisoned in a labor camp, forced to marry a high-ranking Khmer Rouge general, and then shot and abandoned in the jungle. (Other sources claim that she died of malnutrition weeks before the regime’s collapse.) A more detailed account can be found here: It’s a horrifying story – and some of the others are worse. As “westernized” celebrities, the people involved with this music did not fare well under Pol Pot.

So I can’t exactly shout “Woo-hoo! Free music!” in the face of one of history’s most appalling acts of genocide. But I think we can assume that the performers would want their music to be heard, especially since the Khmer Rouge did everything they could to destroy it*. So download the tracks – and if you have the cost of a CD lying around, send a check to the Cambodian Red Cross, or some other worthy charity.

* This opens up a whole other can of worms. Am I, in part, valorizing this music because of the artists’ personal tragedies? But when I’m actually listening to the tracks, I don’t worry about that kind of question because I’m too busy rocking out.