[This post begins Terminator Week on Overthinking It. –Ed.] 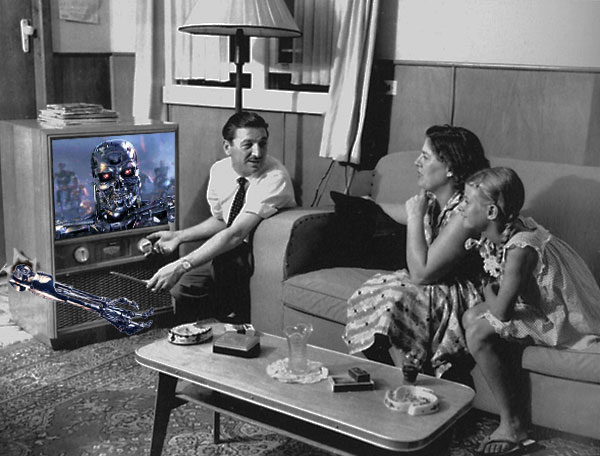 (Photoshopping courtesy of the lovely and talented Mr. Lee)

To be honest, I didn’t start watching “Terminator: The Sarah Connor Chronicles” with high hopes. Terminator 3 had its moments, but it also had all the hallmarks of a franchise-killer, and TV spinoffs generally don’t inspire a lot of confidence. (With “Happy Days,” “Mash,” and “Buffy the Vampire Slayer,” the track record is actually better than you might think… still, I was expecting something closer to “Highlander: The Series”). Anyway, I’m glad that my girlfriend talked me into giving it a shot, because the show is really very good. Today I’m here to overthink the reasons why.

When I think of Terminator, I tend to associate it with Alien and Predator*: sci-fi/horror franchises with one-word titles, associated with Arnold Schwarzenegger and/or James Cameron. But actually, although Alien probably delivered the best movies, and Predator the worst, those franchises have a lot more in common with each other than with Terminator. This is probably why the idea of an Alien/Predator crossover still seems cool even though it totally failed in practice, but the idea of a crossover between Terminator and either of them – or indeed, anything at all – is idiotic. (Now that I look into it, there are comic book versions of Robocop vs. Terminator, Superman vs. Terminator, and Alien vs. Predator vs. Terminator. Which just goes to show, there’s no fictional world so compelling that copyright holders looking to cash-in won’t take a giant shit on it.)

At the end of the day, Predator and Alien are all about the destructive force of their monsters, and not at all about the world that the monsters are put in. In Terminator, on the other hand, the freakiness of the monsters isn’t so much that they’re destructive – although they are – but that they are unstoppable. (Consider how much time the terminators spend getting shot and shrugging it off, as opposed to actually, say, terminating.) This might seem like a trivial distinction, but it turns the T-808 into an expression of the film’s time travel premise: the future is out there, it’s coming, and nothing can stop it. Because of this organicism (ha ha), the Terminator universe is more central to the series than any particular robot. And this makes the franchise ripe for serialization. (Another way of looking at it: the motive of the Predators is trivial, the motive of the Xenomorphs nonexistant. The motive of the Terminators is rather complex, and absolutely central to our experience of the films.)

In a sense, the relative crapulence of Terminator 3 might have helped the show. Much as I like the Connor Chronicles, I don’t think any TV show would be able to stand up to the thrill ride provided by Terminator 2. Special effects have come a long way, this level of kickass is still hard to pull off. (By the way, how ridiculous is that music video? If you answered “very ridiculous, but in a good way,” you are correct.) The tone of the show is a lot more like the third movie, too: elegiac, thoughtful, and served with a dollop of self-knowing irony. (The show’s friendly terminator is named “Cameron,” and in the most recent episode rocked a motorcycle-cop helmet Robert Patrick style). The tone works, but I think if I hadn’t seen Rise of the Machines first, I’d have the same problems with Connor Chronicles that I do with T3.

Oh, the show still brings the action where appropriate, largely in the form of hot, hot, robot-on-robot fistfights. And it brings the horror. One of the more entertaining plot threads has involved a damaged terminator that is forcing plastic surgeons to build it a new flesh covering, kind of like a sci-fi version of The Mummy… it’s been suitably gory and creepy. But for the most part, the show focuses on the very confused and damaged people struggling blindly to prevent the apocalypse. And of course on sloooowly developing story arcs.

And that’s what worries me. Right now, The Sarah Connor Chronicles can afford to coast on novelty, eye candy, and tantalizing plot hooks, but eventually it will live or die by those story arcs. What they’ve offered so far is, like I said, tantalizing, especially the glimpses into the post-Judgement-Day future offered by guest star Brian Austin Green. (That future, such a key aspect of the franchise but so barely-touched-on by the films, provides the most exciting territory for the show to explore… and the the most dangerous opportunities for it to screw up and piss off the fanboys.) Unfortunately, they’re going to have to eventually follow up on it all, and while unpacking a complicated mythology. That’s always hard to do, as former Lost viewers know all too well. Still, what they’ve given us so far is great. The show doesn’t seem to be a monster hit, but it’s doing okay… and it richly deserves to be picked up for another season. I guess we’ll have to see what happens. After all, there is no fate.

p.s. My girlfriend now tells me that the Connor Chronicles is going to somehow tie in to the fourth Terminator movie, currently scheduled for 2009. Hopefully they’ll keep the show around for at least that long.

7 Comments on “Overthink It (Dot Com) With Me If You Want To Live!”