True to its name, this episode is basically just one long conversation between Janet and Michael, where they reminisce over their past (or rather, he does — her memory’s been comprehensively wiped) and try to figure out why she’s malfunctioning. Just as Amanda predicted, this turns out to be because Janet is still in love with Jason on some level, and can’t stand seeing him with Tahani. More specifically, it’s because Janet’s been lying about how happy she is to see them together. Lying is something Janets aren’t even supposed to be able to do! But our Janet is the most advanced Janet in the multiverse, which means she can lie — and also fall in love, and feel deep-down emotions that she’s not even in touch with, and have catty opinions about Michael’s outfits. At the very end of this episode, she even creates a boyfriend for herself, which is SUPER against the rules (and also a fun hook for next week’s plot). 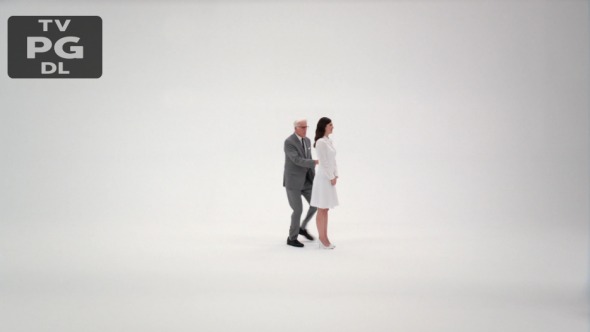 Apparently Michael stole Janet by just sort of walking in and taking her. “It makes sense, right? They’re good, so they’re… trusting, and stupid.”

D’Arcy Carden, the actress who plays Janet, does an amazing job here. She’s always been good, but the character has generally been… sort of… not… a character? So much as a series of two-dimensional bits? That changed dramatically in this episode. We see Janet scared, we see Janet doubting herself, we see Janet being fond of Michael… all of these emotional beats are pretty mild, but Carden sells all of them. And that’s really important! When Chidi murdered Janet in season one, I feel like there was really an open question of whether he’d done anything unethical or not. That Janet wasn’t a person — or at least, you could plausibly argue that point. But this one absolutely is a person. Compressing her into a marble and then eating her (“I’m very high in potassium — like a banana!”) is no longer an option that we can seriously consider.

(Actually, that’s a question for the comment thread: at what point does “no killing Janet” become a bright moral line for you?) 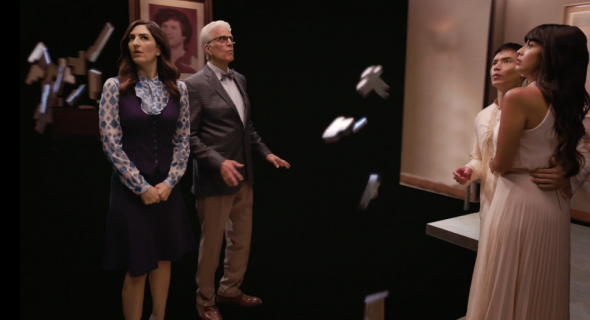 This was my favorite of Janet’s malfunctions. And check out Ted Danson bringing the A++ green screen reaction shot game.

But the really interesting development in this episode is that Michael isn’t willing to kill Janet either. THIS. IS. HUGE. From a character-and-plot point of view, the last little arc of episodes has been all about Michael’s moral awakening. Here’s where he officially gets woke. Sure, Chidi and Eleanor have already made some progress. Getting Michael to feel existential angst did convince him that there might be some point in trying to be moral. His sincere apology to Chidi — in that it was an honest-to-goodness attempt to understand and honor the wishes of an Other — might show Michael obeying some kind of bedrock moral principle. But this is a much bigger deal. Here we see Michael actually caring about Janet and refusing to harm her, despite the obvious risk that he runs by protecting her. Granted he’s motivated as much by self-interest as by anything else: she’s his friend, he’d be sad if she wasn’t around anymore. Nevertheless, Michael is being nice here, and without someone badgering him into it first. (!!)

Isn’t it interesting that what provokes this is not something he studied — not some nugget of wisdom that Chidi dropped on him in seminar — but just the lived experience of working with Janet, day in and day out, for however many years they’re supposed to have known each other? It’s not like the other stuff was totally useless: there was a great little silent beat where Janet says something like “And then everything will be back to normal! Well, for you, I won’t be around anymore.” And then just for a second Michael got this haunted look in his eyes, and I thought to myself, “Aha! It’s a good thing that they made him contemplate death a little while back!” But still, the driving force of his moral improvement is the friendship itself.

And this in turn tells us something about what this show thinks “goodness” is in the first place. You’d think that a show that’s so concerned with moral philosophy would have a clearly defined theory of goodness, but The Good Place is actually pretty coy on this front. A few of the traditional answers are pretty well ruled out. One of the oldest ideas is the Divine Command theory, which says that the good is whatever God says it is. We know that The Good Place doesn’t support this, because if it did, we’d WANT the main characters to be tortured in hell forever. According to God (or whatever the powers that be, uh, are), they all deserve to be in the Bad Place! We instinctively reject this — the whole premise of the show is that it would be good if nobody was tortured. But nobody ever points this out explicitly. On the other hand, there’s the utilitarian approach, where you try to maximize happiness and minimize suffering. But that’s not what the show has in mind either! At the end of season one, when everyone was volunteering to sacrifice themselves by being the one to go to the Bad Place, it felt like they were all being “good” even though in utilitarian terms all of those outcomes are equivalent. 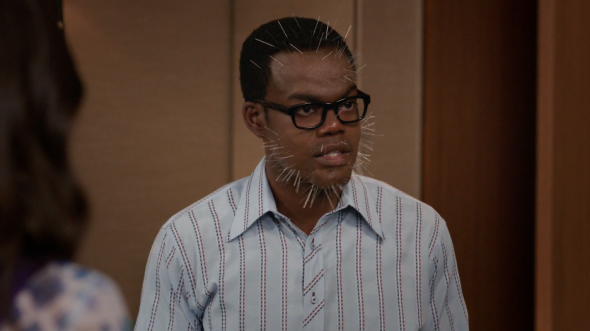 The show is a lot less coy about its concept of evil, though. “Needles!” isn’t very ambiguous.

The Good Place seems to suggest instead that “goodness” means being involved in warm, affectionate relationships with other people. I mean, think about it: even if Michael’s friendship didn’t involve him saving Janet’s life, wouldn’t we feel like he’d become “better” simply by feeling affection for her? And there are other places where this crops up. Janet’s evolution is primarily about feeling affection for Jason. At the end of season one, Eleanor’s big “Ya basic!” speech is mainly about the fact that the demons’s plan backfired because it drove the humans closer together. And the deeper we get into Eleanor’s awful life on Earth, the more it seems like her awful behavior can all be traced to her self-inflicted isolation.

If I’m right about this, then The Good Place is actually arguing for some version of “care ethics,” a subject which so far has been notably absent from Chidi’s syllabus. I’m guessing that this is intentional — that they want to sort of prove it in the storytelling before they bring it up as an abstract theory. But I could be totally wrong. The show has certainly surprised me before! And I can’t wait to see where they’ll take it next.

One Comment on “The Good Place Unlocked: Season 2 Episode 7, “Janet and Michael””