This year, we’re going to be putting our day-after observations about Game of Thrones into writing, in a series we call Game of Thrones Unlocked. In keeping with our tradition, these will focus on explicating one scene as an interpretive key for unlocking deeper interpretations of the episode’s themes. These articles will contain spoilers through the episode under discussion. This week, Jordan Stokes tackles “No One” (Season 6, Episode 8).

The point of the riddle, of course, is that there are multiple powers in any society, and that one of them — and arguably the most important one, the one that no other power can afford to do without — is the power to do violence.

Several times in this week’s episode, we’re dropped into a situation in which there are multiple centers of power, only one of which is holding the knife. Who’s in charge at Riverrun: Edmure, or the Blackfish(†)? Who’s in charge in King’s Landing: Tommen (and the High Sparrow), or Cersei (and Ser Gregor(†))? Who’s in charge in Mereen: Tyrion, or Grey Worm(†)? Who’s in charge in whatever random forest the Brotherhood Without Banners is camped out in: Beric Dondarrion, or the Hound(†)? In each case, I’ve handed the violence-specialist a dagger.

When people talk about the power to do violence (and specifically about who has that power, and who doesn’t), they’re usually talking about the state. A monopoly on violence IS the state, according to a lot of people, probably starting with Ibn Khaldun, for whom a state is “an institution that prevents injustice other than such as it commits itself.” The riddle about the sell-sword isn’t supposed to be a way to game out a particularly awkward dinner party: it’s unveiling a feudal version of a social contract. The great houses command dozens of lesser houses — but the only reason that the great houses get to be great is that all those lesser lords obey their commands, and those lords in turn owe their lordship to the loyalty of some unwashed men with knives. If the sellsword isn’t listening to you, he’s listening to someone else. And then you’re screwed. 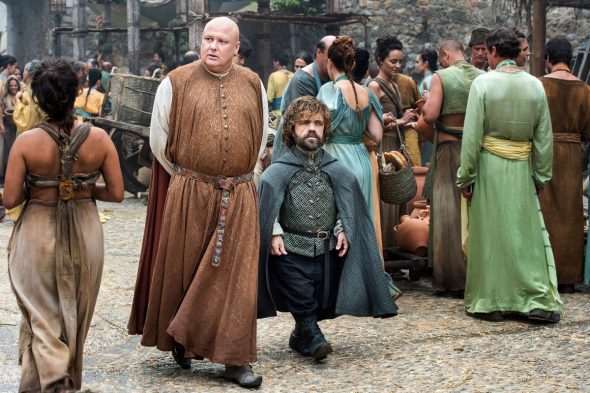 Okay, I have another riddle for you: why do they put us into so few scenes together?

This is generally meant to be a value-neutral description of a state of affairs. It’s neither good nor bad that establishing a state requires a monopoly on violence, it simply is the case. But you occasionally run across the idea that specialists in violence have a quality — “warrior spirit,” or something to that effect — which makes them better at leading, or in some cases grants them the moral authority to lead. This is the idea that the current episode is really grappling with. Because like the riddle with the sellsword suggests, you don’t usually run across a situation where the specialist in violence is him-or-herself making all the decisions. Usually, the people who govern are specialists in governing, and they have a subcontractor who takes care of the violence for them. And sometimes the governor and the subcontractor don’t get along. That’s what we see in this week’s episode, and over and over again we’re asked to pick sides. Does warrior spirit make you a good leader? Or do the stabby-men need to stick to their stabbing, and leave the leading to them as can lead?

The Edmure/Brynden exchange is probably the clearest entry on the pro-warrior spirit side of the ledger. There’s a contrarian case to be made for Edmure having done the right thing here, but man, it sure doesn’t feel like it in the moment. Brynden, the specialist in violence, is right about everything:  when Edmure comes up to the gates, it is a Lannister trap. Accepting the Kingslayer’s safe-conduct so that you can go help Sansa is a crazy idea. (I’m not saying that Jaime was lying, mind you:  just that no sane military commander would have made the offer, and therefore no sane commander would have accepted it either.) And the Tully forces probably could have survived the siege — and this would have been one more thorn in the Lannister’s side, which is a good thing, because the Lannisters are allied with the Boltons and the Freys, who we (the viewers, I mean), hate with a burning passion. But, no, Edmure had to get scared about the life of his innocent child or whatever, so he surrenders. [Exaggerated eyeroll.] Friggin’ civilian. 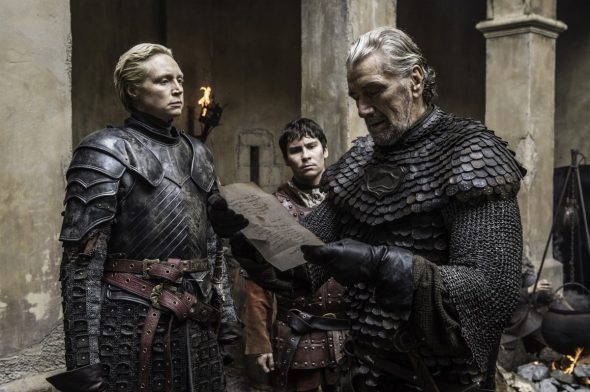 Says here I got written off the show! Typical.

On the other hand, we have Tyrion’s interaction with Grey Worm. Grey Worm has a bunch of great lines in this episode, but my favorite is his retort to Tyrion: “You’re trying to tell me what the army should do. And you don’t know what the army should do.” What Grey Worm is advocating here is a separation of powers: not the legislative/executive/judicial separation that we usually think of, but a separation between wartime and peacetime power. Crucially, this isn’t a matter of letting Tyrion set the political goals and then giving Grey Worm free reign to accomplish them by other means. Grey Worm thinks that during war he gets to set the goals as well. This is a subtle point, but it’s definitely there:  what Grey Worm wants — and what Tyrion very much doesn’t want — is  a tactically sound way to make a glorious last stand. That’s the best military option that’s left, so that’s the one he plans to pursue. Suddenly that warrior spirit looks a lot less appealing, right? (Although, if it really is the best option… luckily Khaleesi lands on the roof before we really have to confront that possibility.) 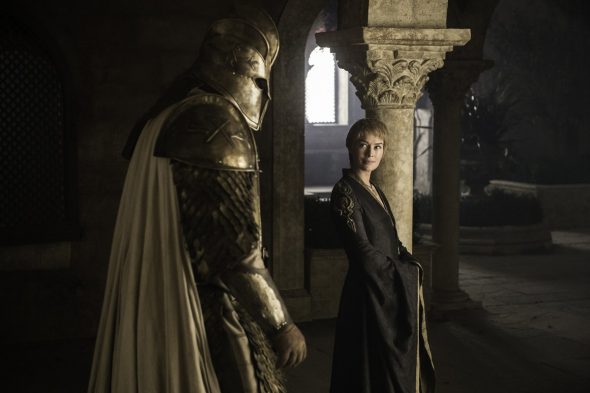 “You ARE the brute squad!”

In King’s Landing, this same basic conflict is mapped onto personal relationships instead of politics. It’s not a struggle between the state and the military, it’s a struggle between Tommen (aided by the High Sparrow) and Cersei (aided by the Mountain). Tommen has all the legal authority, but the presence of the Mountain makes it hard to use that authority for anything without Cersei’s say-so. (The visuals were very expressive here:  watching the crowd make way for Cersei and her lumbering bodyguard, watching Tommen’s advisors shoo her to the back of the room, etc. Oh yeah, and that time where Gregor ripped a guy’s head off.) When Tommen issues his ban on trial by combat, however, the personal becomes political. We’re witnessing something like Nietzsche’s “slave-revolt of morality,” where the aristocratic virtue of manly strength is replaced by the proletarian virtues of reason and equality — and note that this is even the reason that Tommen offers in his proclamation! “Trial by combat helped the powerful avoid true justice,” or words to that effect. But the High Sparrow doesn’t really care about the rule of law. He cares about his struggle with Cersei. He’s not going to win a trial by combat while The Mountain is around, so he arranges for trial by combat to be banned. (A neat solution to the struggle between law and violence:  simply declare violence to be illegal. To start with, Nietzsche might say, define “true justice” as that which applies to the weak and strong alike…)

Similarly Nietzchean is the final exchange between Arya and Jac’gen… Jahqu’en… urgh, I refuse to look up how his name is spelled. Let’s call him Headmaster Albus Stabbledore, and call it a day. Anyway, Arya’s confrontation with her old teacher takes place in full symbolism mode. By saying over and over that the servants of the House of Black and White are nameless, Stabbledore has been trying to say that no person gets to have the monopoly on violence. The state is just a faceless, anonymous edifice. It has no virtues; it also has no vices. It serves everybody, which is just another way of saying that it serves no one in particular. (So the faceless men aren’t specialists in violence. Counterintuitive, I know. The idea is that the institution specializes in violence. The individual killers — well, that’s just it:  the killers aren’t individuals.) So when Arya says that she’s Arya, and that she’s taking her assassin training with her back to Westeros, that’s showing us the alternative to the institutional approach:  Arya gets to have the monopoly on violence, because she’s charismatic, and strong-willed, and she’s got the right bloodline. (Yeesh, did her name have to be one letter away from “Aryan”?)

Now, there’s something about this solution to the problem that strikes us as intuitively right, because we’ve seen it so many times before. (It’s more or less the Luke Skywalker solution, for instance.) But before we join in the jubilant chorus about Arya finally getting a chance to interact with the actual plot again, I want you all to pay attention to one thing:  this right here? Where Arya decides that, instead of just being a cog in Braavos’s violence-apparatus, she’s going to use her death-dealing skills to advance her own political agenda?

In the real world, we have a name for this. It’s “military coup.”

23 Comments on “Game Of Thrones Unlocked: Season 6 Episode 8 “No One””