This week, Game of Thrones has a simple question for its characters. “Who are you, really?” Different characters get asked this, in different ways, over and over again throughout the episode. In a sense, this puts the show on pretty familiar ground. This is definitely not the first time that this question has been raised. But it manages to squeeze some new wine out of these old grapes (that’s a phrase, right?), by showing us that there’s not actually one simple answer to that question.

The most straightforward version of this theme is Arya’s, which makes sense, because, golly-Jesus, she has been doing this exact plot since the start of season five. Here, let me do my impression of every scene with Arya in it:

Arya: “I wanna be a faceless man! A girl has no name.”

Jayden Hraaagh:  “Are you sure you’re not still Arya Stark?”

Juggalo Hugger:  “…are you suuuuuuure you’re not still Arya Stark?”

And after well nigh on two seasons of this, this is the episode where she’s finally like “Pfft, fooled you, I was Arya Stark the whole time! LOLOLOLOLOL!!!” Which, honestly, not a particularly satisfying way for this subplot to wind up. But it still sort of works, because it involves Arya deciding to be heroic — try as she might, she’s just too decent to be an assassin — and this is such a familiar answer to this question, in this sort of story.

Although Arya’s answer is #basic, the way that the question is posed to her is interesting. (Like I said, the question gets asked to each character in a slightly different way.) Here, it comes in the form of Lady Crane’s line, “Do you like pretending to be other people?” Arya’s first response is to lie as hard as she possibly can:  “I have to go, my father’s waiting for me.” This is pretty much the least true statement that one can make about Arya Stark. And the false name that she gives, “Mercy,” is even more revealing. The faceless men present themselves as dispensers of mercy– but as this episode shows, they’re also a tool that the wicked can use to become the powerful. (You know, locally speaking.)

Slightly more complex is the interaction between Sam and Gilly, near the end of their plot in this episode. After watching Sam’s father degrade him all through dinner, Gilly tells Sam that his father “doesn’t know who you really are.” But although Gilly is talking about Sam’s father, it’s pretty heavily implied that Sam doesn’t know who he really is either. It’s only after Gilly’s speech that Sam mans up and steals his father’s  Valyrian blade. By asking Sam who he really is, Gilly changed the answer to that question. So was he really “really brave all along?” Or is his identity not that fixed to begin with?

A third example of this question pops up during Jaime’s elimination ceremony, when he tells Tommen “You don’t have to do anything you don’t want to, not in that chair.” For Jaime, the answer to “who is Tommen, really?” is “He’s the king, dammit!” But unlike Gilly’s, Jaime’s intervention has no effect. Tommen says that he has to answer to the gods, and sends Jaime on his way. Is this because, rather than asking Tommen to look deep within himself (to find the true essence of his Tommen-ness, or whatever), Jaime is basically asking him to define himself in terms of his job? 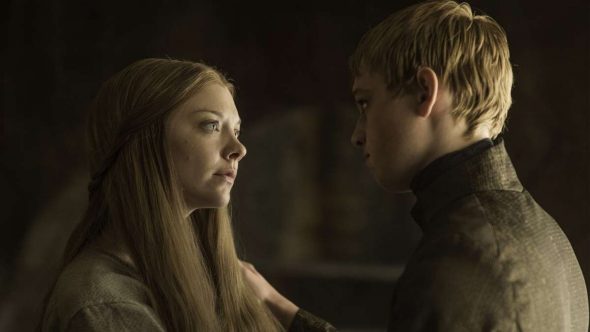 You can tell that I’m serious because I straightened my hair.

Most distorted of all is the interaction between Margaery and Tommen right at the beginning of the episode. Oddly enough, this has the clearest version of the question: “It’s hard to admit who we really are,” says Margaery. But it’s painfully obvious that she has done no such thing:  she’s still putting on whatever front she feels like she has to put on to make it out of there alive. For Margaery, the question “Who are you?” is malformed:  at best, you could answer the question “Who do you think you are,” and even this, for her, might be a question without an answer:  all you get — or at least, all she’s willing to give you — is an infinite regress of constantly shifting poses. (I’d say that this is a sexist characterization, if it wasn’t so clear that — in her particular circumstances, surrounded by this particular bunch of lunatics — it is absolutely the right thing to do.)

Who are you, really? Is your identity an immutable essence, like Arya’s? A malleable, and therefore mutable essence, like Sam’s? Are you just what you do? (Which is what it seems like Jaime wants Tommen’s identity to be.) Or is “who you really are” mostly determined by the set of false poses that you’re willing to squeeze yourself into?

It’s an interesting question. But it would be more interesting if the show’s moral compass was really as neutral as some people claim that it is. We’re not supposed to hate Tommen and Margaery in the way that we were supposed to hate Joffrey, but they’re obviously not “good guys.” Whereas Arya and Sam clearly are. The more heroic you’re supposed to be, the less your “true self” depends on outside circumstances. Who are you, really? Game of Thrones presents us with several answers to this question — but only one of those answers is supposed to be right.

Or read more from… Featured, TV, game of thrones, identity

3 Comments on “Game of Thrones Unlocked: Season 6, Episode 6 “Blood of my Blood””