This year, we’re going to be putting our day-after observations about Game of Thrones into writing, in a series we call Game of Thrones Unlocked. In keeping with our tradition, these will focus on explicating one scene as an interpretive key for unlocking deeper interpretations of the episode’s themes. These articles will contain spoilers through he episode under discussion. This week, Jordan Stokes tackles “Book of the STranger” (S6 E3).

One of the things that sets Game of Thrones apart from the usual fantasy properties is that it’s a fantasy world without magic… except that it actually isn’t. Magic is there, right from the beginning of the series — remember that the very first scene in both the show and the book involves the White Walkers. Nevertheless, for most of the actual people in the Game of Thrones universe, magic doesn’t exist. It doesn’t affect their lives, they’ve never known anyone who can do it, and to the extent that they’ve heard stories about it, they see them as simply that:  stories. There’s some fun dramatic irony here, because as viewers/readers, we know that magic is for real, and what’s more, we know that it’s not going to stay tucked away in the ‘here be dragons’ corners of the map. The big cold is coming down from the north. And then there’s Melisandre’s Red God, Dany’s dragons, whatever’s going on with the faceless men, Bran’s greensight and warging… all of these get more and more prominent over the course of the series. Magic is coming back into the world.

This is nifty. But as we roll into the sixth season, it causes a big problem for plausible characterization. Soon enough, every scene is going to feature a room full of people who grew up thinking that magic was fake, and now know that magic is real. And it seems like the way the writers are handling this is to just have everybody act like nothing happened.

Like, here’s how I imagine Jon and Sansa’s reunion actually would have gone.

Jon: “… and then after that I got stabbed to death, and then I was resurrected, and then, well, you showed up. So that’s what’s been up with me. How have you been?”

Sansa: “YOU CAME BACK FROM THE DEAD?!”

Jon: “Yeah, the priestess of R’hollor magicked me back to life.”

Sansa: “YOU CAME BACK FROM THE DEAD THANKS TO PAGAN FIRE MAGIC?!” [She backs away, crossing herself frantically.] “Stay away from me, demon! The power of Christ compels you!”

Jon: “Get a hold of yourself, women, you’re supposed to be pseudo-Christian.”

Or alternately, if Sansa talks first:

Sansa:  “… and then long story short, he turned out to be even more of an asshole than Littlefinger and Joffrey combined. And then Theon and I escaped by jumping into a snowbank, and then Brienne — did you meet Brienne? I think you’ll like her, anyway, it turns out she — “

Jon: “They’re real. I fought some. I barely survived.”

Sansa: “Oh my god. Oh my GOD! Why did you let me keep TALKING?! I’ve been going for HOURS, we need to WARN EVERYONE!”

And then just to remind you, this is how their reunion actually went:

Sansa: This is good soup.

Now, this much is just me nitpicking. But I think there’s a deeper connection to be made here. Lest we forget, even if we take the supernatural aspects out of it, Jon and Sansa have been through some intensely horrific experiences. Oughtn’t this to matter a little more than it does? I mean, Sansa… look, Sansa was raped and tortured. Maybe she’s told Jon about this, maybe she hasn’t. Either way, that’s kind of a big deal. But we don’t get to hear that part of their reunion. Instead, we get the soup.

And it’s not like the show doesn’t care about the way that huge traumatic forces disrupt everyday life, at least when those forces are zombies. On the most abstract level, Game of Thrones is basically like Titanic:  people are scurrying around, sneering, rearranging the deckchairs, and occasionally boinking in the back of a Renault, and then the plot smashes into a mountain of frozen death. Once everyone knows the truth, they’ll all have to pull together, right? Right?

Maybe not. Because now some of them do know, but the writers aren’t really letting them react to that knowledge. It’s beginning to seem like Game of Thrones is a show about magic, and trauma, and people steadfastly refusing to talk about either magic or trauma.

And this — continuing to rearrange the deck chairs, post iceberg — is also kind of what the episode is about on a surface level. Melisandre’s faith should have been irrevocably shattered by everything that went down with Stannis. Instead she’s sticking to her same old playbook, just with a different messiah. Brienne is still mainly worried about punishing Renly’s enemies:  Renly’s death is in the past, but Brienne doesn’t forget or forgive. This seems noble, because Brienne is noble, but let’s think about it for a minute. For Brienne, Sansa is the iceberg. Renly’s death is in the past. Sansa needs Brienne’s help right now, because the Boltons (and actually screw the Boltons because ZOMBIES!). And right at the end, the assembled Dothraki Khals seriously overestimate the significance of whatever conversation they were trying to have. 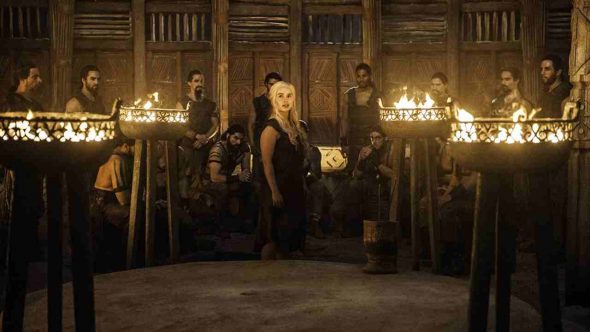 I want you all to know that I value your input, and my door is always open. Except the doors to this room, obviously. Those are barred shut.

Most notably, there are the twin scenes in King’s Landing and Mereen. In one, Cersei convinces Olenna Tyrell to form an alliance with her in order to break the Faith Militant, on the basis that preserving aristocratic privilege is more important than which aristocrats in particular are the most privileged. In another, Tyrion offers a bargain to the Masters of Astapor and Yunkai which would allow them to maintain their wealth and power while nominally abolishing slavery.

The first is interesting because, in real life, this plan would probably work just fine. Yes, eventually the crowned heads of Europe had to make way for the historically inevitable rise of democracy, but the first hundred or so times that the aristocrats banded together to quash a populist uprising, those uprisings stayed quashed. (Hey, High Sparrow! The year 1848 called:  it says you’re boned.) In the context of the show, however, I think we’re meant to realize that Cersei is out of her depth. The threat posed by the Faith Militant is a more profound one than she realizes:  they’re equivalent to the zombies, to the iceberg. Preserving aristocratic privilege is no longer an option. If she was smart, she would be running as fast and as far as she could, and stealing the silverware on her way out the door.

The second scene is interesting because it shows Tyrion playing on the Masters’s natural tendency to ignore the iceberg. Astapor and Yunkai can’t possibly coexist with a free Mereen. The former slaves know this, Missandei knows this. Tyrion, as thick as he lays on the bulls#!+, presumably knows this. And the Masters also know this — or at least they knew it, which is why they’ve been frantically trying to assassinate Daenerys! But Tyrion offers them a plausible scenario where Dany isn’t an existential threat:  “Hey,” they’re presumably thinking “these lap dances are nice, and the Suns of the Harpy are expensive, and we can go back to business as usual for seven whole years! I’d really like to go back to business as usual:  we haven’t rearranged those deck chairs in forever.” It’s brilliantly calibrated, really. Tyrion’s offer — abolish slavery, or else! — is just insulting enough that it probably doesn’t occur to them that he might be lying through his teeth. 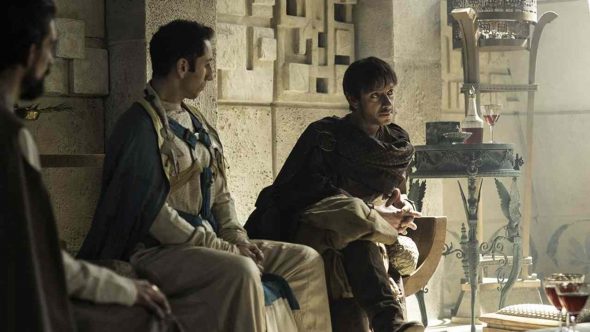 Let’s hear him out! That’ll probably work out really well for us.

And then of course there’s the exchange that the episode is named after, where the High Sparrow paraphrases the Book of the Stranger. The Sparrow tells Margaery that he used to be dedicated to luxury, food, clothing, and sex, but then he caught a glimpse of ultimate reality, and it  made him realize what was really important in life. In the Book of the Stranger, that ultimate reality is supposed to be death. For the High Sparrow, it was nudity:  seeing people’s real humanity, with all pretense stripped away. But the result is the same. He put aside the world of appearances, of luxury, of wealth and status, and turned to higher things. Well, the show has shown us the ultimate reality of death. (That would be the White Walkers.) It’s shown us the absolute worst side of the appetite that lies behind luxury and vice. (That would be Ramsay.) I, for one, am ready to start paying attention to those things. But the characters on the show feel no such sense of urgency. After all, the soup is good.

5 Comments on “Game Of Thrones Unlocked: Season 6, Episode 4, “Book of the Stranger””