Hey. Hey! Guys. Buddy. Magic!. (Can I call you Magic!? Actually, can I just call you Magic? Please?) We need to have a conversation about the title of your song, because rudeness does not mean what you evidently think it means.

Actually, let me walk that back a little bit. It is in no way evident what you think “rude” means, but whatever it is, I’m pretty sure you’re wrong. Here’s the interaction that makes up the core of your song’s narrative:

Saturday morning, jumped out of bed
and put on my best suit
Got in my car, and raced like a jet
all the way to you

Knocked on your door, with heart in my hand
To ask you a question
‘Cause I know that you are, an old-fashioned man.
Yeah.

And then pay careful attention to this next part:

Can I have your daughter for the rest of my life?
(Say yes, say yes, ’cause I need to know.)

You say I’ll never get your blessing ’til the day I die
Tough luck, my friend, but the answer is ‘No.’

And then there’s the chorus, which is also important:

Let’s just pause to briefly chuckle at the “human too” line, which is not an acceptable rhyme with “rude” in any aesthetic system worthy of the name. And I like to imagine a version of the song where the dad’s like “Wait, you’re human? I thought you were a crafty river otter, wearing the wig from a Disney Snow White costume! Well in that case… I always did want a human son-in-law. Let’s talk.” On to the breakdown:

Now, Magic!, before I get into criticizing your diction, let me first say that I understand that this man has hurt your feelings. It can’t be fun to have your girlfriend’s father tell you that he doesn’t want you to marry her. But that in itself does not amount to rudeness. To be rude, you need to violate convention. Rudeness means doing something that polite society expects you not to do. Being rude means failing in a social duty that doesn’t quite rise to the level of a moral obligation. And if you are really going to go through the whole song and dance about asking a girl’s father for her hand in marriage… if it was really a question, if you really needed to know what his answer would be, then it must logically follow that he has the option to say yes or no. And if he has the option, he doesn’t have the duty. So he said no.

Now, perhaps you are thinking that it’s not the refusal that was rude, but the manner of the refusal. That’s a possibility… but if you look at what he actually said, it doesn’t really hold up. Just to illustrate my point, here are a few ways that the lyrics could change to indicate actual rudeness.

Can I have your daughter for the rest of my life?
(Say yes, say yes, ’cause I need to know.)
You say “Hah! Like I’d let her marry you.
Get a job and a haircut, you hippie!”

Can I have your daughter for the rest of my life?
(Say yes, say yes, ’cause I need to know.)
You turned around, bent over, and farted
And then fanned the air to blow it at my face.
Which seemed excessive.

And so on. As refusals go, what he actually said is… well, it’s definitive, I guess. But rude it ain’t. It miiiiight be a little condescending, I guess, to call someone “my friend” while you’re rejecting them like that. But it also might be a polite(!) attempt to soften the blow. (Tone of voice would tell us everything here, if we had access to it.)

Magic!, I can already hear you next objection, which is that it is twenty-god-damned-fourteen, and therefore we as a society no longer really go in for the whole “asking the girl’s father if you can marry her” mishegas. Fathers in our society don’t get to pick their daughters’ fiancés, and if a woman decides to marry someone her father doesn’t care for, then the father does have a social duty not to tell the suitor to his face that he’s a bum. This is all very true. And if all the characters in the song (the father, the daughter, your singer-persona) know this, if you weren’t really asking for permission at all, but only making a polite gesture to the father… and in this case, yeah, it’s a little rude of him to throw it back in your face, just like it’s rude to refuse any other empty formality (like refusing to shake someone’s hand, for instance).

But that defense isn’t going to hold up either. You wouldn’t approach an empty formality with your “heart in your hand.” You wouldn’t devote an entire song to this caveman-patriarchal concept if you didn’t sincerely buy into it on some level. More to the point, there’s no evidence for this attitude in the lyrics themselves. Again, here’s a counterfactual version that is actually rude:

Can I have your daughter for the rest of my life?
(You’re gonna say yes, this is just pro forma.)
You say I’ll never get your blessing ’til the day I die
And I’m like “Are you even for real? Hey, everybody, get a load of Lord Grantham over here, not giving me his blessing!
This freaking guy! Oh!”

(Arguably both parties are being a little rude in this version.)

One parting note:  all of this has been assuming that we are dealing with the American Standard English version of the term, but there is another definition that we have to consider before we wrap up. “Rude” is a reggae song, which just goes to show once again that there is no music, anywhere—none so raw, nor difficult to perform, none so grounded in social protest, nor organically connected to the lived experience of a subaltern cultural group—that it will not ultimately be turned into a tool for helping funny-looking white guys get laid. (So it goes.)

This would not be the first time that a sort of, uh… parboiled reggae of one sort or another has captured America’s imagination. We all have fond memories of “Red Red Wine” and  more-guiltily-fond memories of “White White Snow” (to say nothing of the collected works of Ace of Base, bastardized Swedish electro-reggae being something of a genre in its own right).

But what I think makes Magic! sort of interesting, from a sociological perspective, is just how closely they approximate the sonic aspect of classic roots reggae, while utterly ignoring the cultural context that went along with that sound. And I think their use of the word “rude” is emblematic of this, because “rude/rudi/rudeboy” has a very resonant meaning in reggae, something like the meaning of the word “gangster” in hip hop, or “good ol’ boy” in country. It can cover anything between “actual criminal:  to be avoided” and “stylish badass:  our kind of people.” And none of this is anywhere to be found in Magic!’s chart-topping song.

Certainly, I am the last person in the world who ought to be policing this. (See above, re: “funny-looking white guy.”) But hopefully the following set of images will prevent any further confusion. 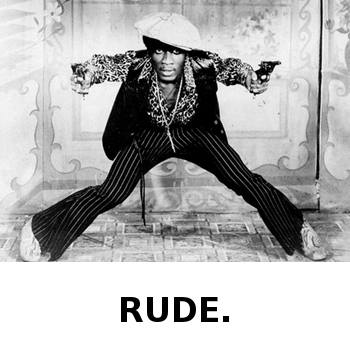 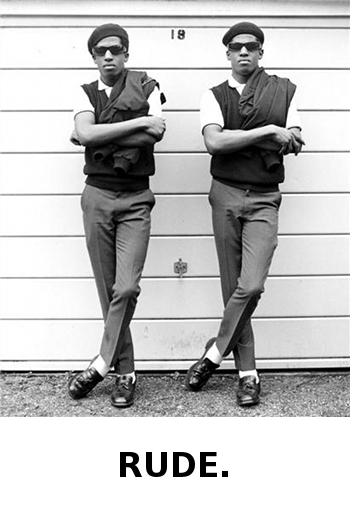 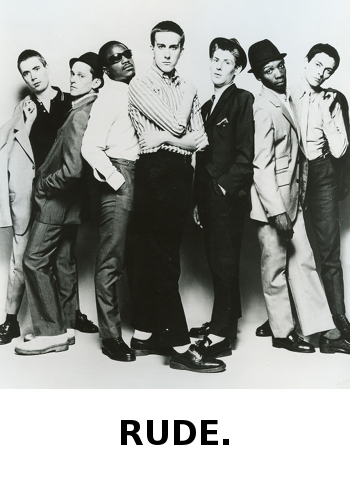 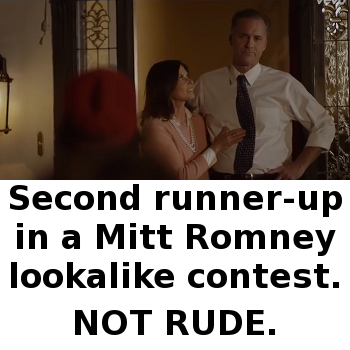