Perich’s analysis and review of The West Wing Season 2 continues with Episodes 9 through 11: “Galileo,” “Noel” and “The Leadership Breakfast.”

The President and NASA plan a TV event for a probe’s landing on Mars; satellite photographs show a suspicious-looking fire in Russia; Leo asks Toby and Josh to decide on the next postage stamp; Sam and C.J. have personal reasons for not wanting to accompany the President to a concert. (c/o IMDb)

“Galileo” begins with President Bartlet rubbing his hands at the opportunity to host a live broadcast of an unmanned Mars landing. He gets a look at the remarks prepared by a NASA staffer and winces. Bartlet asks Sam to revise the remarks. Sam, with about a five second pause, dictates the following:

Write this: “Good morning. Eleven months ago a 1200 pound
spacecraft blasted off from Cape Canaveral, Florida. Eighteen hours ago…” Is it eighteen hours ago? We’re on the air at noon eastern. […] “Eighteen hours ago it landed on the planet Mars. You, me, and 60,000 of your fellow students across the country along with astroscientists and engineers from the Jet Propulsion Lab in Southern California, NASA Houston, and right here, at the White House, are going to be the first to see what it sees, and to chronicle an extraordinary voyage of an unmanned ship called Galileo V.”

Bartlet’s response: “He said it right.”

Should we believe that anyone can deliver a perfect set of opening remarks, extempore, with only a pause to check the time? In the universe of The West Wing, we must. As I’ve mentioned at least once, all the protagonists of The West Wing have the mutant power to instantly, accurately and rhythmically deliver trivial statistics to prove their point. And while it seems a little pat – Bartlet’s response adding another layer of corniness to an already starchy muffin – to see a senior White House speechwriter delivering neat prose off the top of his head doesn’t strain credibility too hard.

More to the point, he does say it right. The NASA staffer’s original draft begins with the sort of empty pomposity that audiences take for granted: “Good morning! I’m speaking to you live from the West Wing of the White House. Today we have a very unique opportunity to take part live in an extremely historic event which …” That’s as far as Bartlet makes it before he and C.J. point out that (1) nothing can be “very unique” (2) or “extremely historic,” as both of those are binary qualities, and (3) the word “live” is repeated twice in the first two sentences. We encounter sentences like that all the time – in work emails, in scholarly papers, in Presidential addresses – and don’t blink at them. But they are cliched and they could be better.

That, of course, is one of the recurring themes of The West Wing. It trains us to expect better of our leaders. If the President is trying to excite schoolchildren, he shouldn’t kill time with winding sentences. He should deliver crisp, vivid prose that describes a momentous scene. The President is not only a chief executive in this context: he is a champion of causes.

It also sets up an interesting contrast between the NASA staffer, who’s worked hard on his printed remarks, and Sam Seaborn, who can deliver a clear speech extemporaneously. Sam looks perfect; the NASA staffer looks like a failure. But it’s not hard for us to imagine Sam mentally composing this speech from the moment he first saw the NASA staffer’s rough draft. We don’t see that process, though. Throughout this episode we are invited to compare the appearance of perfection vs. the evidence of human failure. This is the first instance. 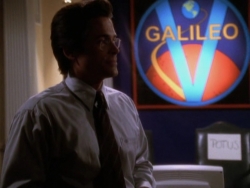 There’s a subplot involving Josh and Donna picking the next stamp which, I just, I don’t even. It’s a stamp. I couldn’t get invested in stamps back when people still used stamps; don’t ask it of me today. And the emotional pivot of the subplot is whether or not to nominate (fictional) Marcus Aquino, war veteran and former Puerto Rican commissioner who also agitated for PR statehood. This story doesn’t know whether it wants to be a humorous subplot about the trivia that White House staff sometimes have to deal with (choosing a stamp!) or a serious subplot about the implications of America’s colonialist history (Puerto Ricans can’t vote!). You can’t have it both ways, Sorkin. Pick one.

(Of course, the point of The West Wing is that the people matter as much as, if not more than, the issues do. So the point of the subplot isn’t the gravity of philately, but the ambiguity of whether or not Josh and Donna are ever going to do it. Living in the future, I am privileged to know that they won’t, so I just can not be bothered with this god damned stamp nonsense)

(Also, without trivial subplots and repeated dialogue, each episode of The West Wing would be 18 minutes long)

While attending a concert with the President, C.J. has to duck several rejected job candidates for a Deputy Press Secretary job, one of whom she used to sleep with. Sam also has an ex to avoid: Mallory McGarry, Leo’s daughter, who’s now dating a hockey player. There’s awkward interplay surrounding each of these meetings and evasions. They ultimately end in catharsis: Sam and Mallory having some frank talk about the space program, and C.J. and her ex (Colm Feore!) having a snit outside the Kennedy Center.

We’re conditioned to think of our rulers as “the makers of manners,” as Shakespeare put it, but in The West Wing they’re the subjects of social niceties, not the dictators. C.J. tries to avoid Colm Feore’s character all evening, then tries to act gracious when he shows up, disappointed. The President grumps his way through the afternoon leading up to the concert, unenthused about an evening of Iceland’s idea of modern composition. Unspoken in these social feints is the premise that these are the most powerful people on the planet. C.J. speaks to the world press a couple times a week. The President has most of the world’s nuclear missiles and aircraft carriers. But they’re not above civility. That implies that our government, despite its power, is a more civil form of rulership.

Civility is the gentle art of orchestrating appearances between unequals. It’s a peaceful alternative to reveling in naked power. We cheer a basketball player who vaults over his opponent to slam the ball home, but we would despise the same player if he didn’t shake his opponent’s hand after the game. We value civility in competition because we recognize that we might someday be the loser, and we would want our conquerors to be civil to us. This is how C.J. can act polite to job applicants, reporters and other staff members, even though the power at her disposal could ruin their reputations.

(We’re still primates enough to revel in brute displays of power, like the President telling a radio talk show host, whom he’s invited to his palace, to OBEY THE SACRED FORM OF ADDRESS, WOMAN. We’re not perfect)

And that’s the overarching theme of the episode: the appearance of perfection vs. the reality of weakness. It’s carried throughout by the darkest plot of the episode: a fire in a Russian missile silo that the Russians won’t own up to. The Russian ambassador won’t admit that it was a missile silo, that the nukes in the silo are in danger, or that the fire was caused by guards trying to steal the warheads. To admit any of that would be to give away weakness. As the evidence mounts up against her, however, the ambassador’s frosty veneer must crack. She can’t sustain appearances. 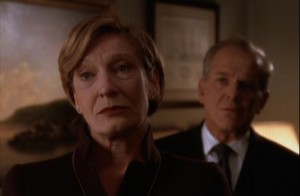 C.J. suggests, as the episode ends, that maybe we don’t need to put up such a perfect front all the time. Maybe we can admit that we lost a Mars probe or that we don’t like green beans or that kleptocrats are looting our missile silos. Sure, Sam Seaborn can speechify like Cato, but we didn’t see the crumpled pages beneath his desk. Yes, the President has a litany of Mars facts at his fingertips, but that didn’t help NASA land that probe.

We have at our disposal a captive audience of schoolchildren. Some of them don’t go to the blackboard or raise their hand ’cause they think they’re going to be wrong. I think you should say to these kids, “You think you get it wrong sometimes, you should come down here and see how the big boys do it.” I think you should tell them you haven’t given up hope and that it may turn up, but, in the meantime, you want NASA to put its best people in a room and you want them to start building Galileo 6. Some of them will laugh and most of them won’t care but for some, they might honestly see that it’s about going to the blackboard and raising your hand. And that’s the broader theme.

To continue to pretend that everything’s fine, even in the face of obvious evidence otherwise, can kill you. Which is an excellent segue into …