On paper, I should love Aaron Sorkin. He writes smart characters spitting smart dialogue at the top of their game. He’s got a brilliant sense of humor. And yet I can’t take to him the way I can to David Mamet, Robert Bolt or Tom Stoppard. I’d like to say this is because of his politics, but for two things: one, the older I get, the less objectionable I find his politics; two, I have problems with even his least political work (the later episodes of Sports Night, all of Studio 60).

Watching Season 2 of The West Wing, Sorkin’s magnum opus, helped me lay a finger on it. I haven’t been turned around all of a sudden from a Sorkin skeptic to an Aaronite. But I’m able to better articulate my feelings. And since that’s one of the core missions of Overthinking It – putting inarticulate feelings about an unexamined work of pop culture into academic language – I think my time was well spent.

Onto the analysis! This inaugural entry examines the two-parter that kicks off Season 2, “In The Shadow of Two Gunmen.” Future entries will hopefully have more than two episodes, because otherwise we’re here for a while.

S2E1 starts off seconds after the finale of S1, with gunshots ringing out from a window as President Bartlet (Martin Sheen) exits some public event. The President catches a stray round. Secret Service rushes him to the hospital, where he’s quickly treated and saved. Josh Lyman isn’t so lucky, however, taking a direct hit and going into surgery. As he lingers in critical condition, he (and apparently other members of the staff) reminisce on how they joined the Bartlet campaign a few years ago.

This episode focus a great deal on protocol. It’s easy enough to say, as showrunner, “the President gets shot and is rushed to the hospital.” But Sorkin chooses to focus on how the President is treated at the hospital. How does the Secret Service call ahead? How does the head nurse handle the sudden boost in security and medical attention required for the President as an inpatient? We get a few scenes devoted to this: someone making the call for ambulances to be diverted to other hospitals; the Vice President being spirited away from a photo op; Bartlet being wheeled in under heavy guard.

Why is process so fascinating? Why do we as an audience willingly sit through scenes of secret agents walking through layers of security (True Lies, the James Bond series), or lab technicians moving evidence from plastic bags to glossy monitors (CSI, NCIS), or code words being exchanged and nuclear launch keys being turned (countless examples)? Because process is evidence of reason. It means someone sat down and thought, “How should the launching of a nuclear missile (for example) be structured?” And it means the structure has been taught and rehearsed.

Reason is reassuring; chaos is frightening. If the President gets shot, we don’t want to see people screaming, crying or shoving each other out of the way. We want calm, commanding men with Southern accents and unflattering haircuts, like Secret Service agent Ron Butterfield, saying things like “GW! Blue, blue, blue!” 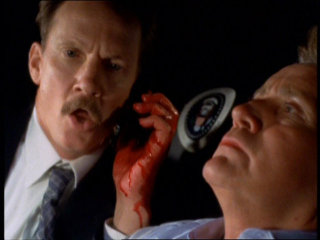 As the crisis at the hospital unfolds, a crisis of conscience plays out in flashback and in parallel. Leo McGarry, former Secretary of Labor, tries to poach Josh Lyman from John Hoynes’s team for the upcoming Presidential race. Lyman has just blown up in a Hoynes strategy meeting. “I don’t know what we’re for!” he says. McGarry asks him to come to Nashua, New Hampshire, to hear Bartlet speak.

On the way, Lyman stops off in New York to say hi to his pal Sam Seaborn, working for a law firm that’s helping to construct a nest of shell corporations and legal transfers to protect an oil company from future liabilities. Seaborn seems disappointed that Lyman is still working for Hoynes (“he’s not the real thing, is he?”).

It turns out, of course, that Bartlet is the real thing. He gives a speech at a VFW in Nashua that maybe twenty people attend. The few bits we overhear are bafflingly dry economics lectures, the sort of thing we’d expect from a “liberal New England academic” (Lyman’s words, not mine). The turning point, however, comes when Bartlet is grilled by a constituent on voting against a milk subsidy:

Yeah, I screwed you on that one. I screwed you. You got hosed. And not just you. A lot of my constituents. I put the hammer to farms in Concord, Salem, Laconia, Pelham, Hampton, Hudson. You guys got rogered but good. Today for the first time in history, the largest group of Americans living in poverty are children. 1 in 5 children live in the most abject, dangerous, hopeless, back-breaking, gut-wrenching poverty any of us could imagine. 1 in 5, and they’re children. If fidelity to freedom of democracy is the code of our civic religion then surely the code of our humanity is faithful service to that unwritten commandment that says we shall give our children better than we ourselves received. Let me put it this way: I voted against the bill because I didn’t want to make it harder for people to buy milk. I stopped some money from flowing into your pocket. If that angers you, if you resent me, I completely respect that. But if you expect anything different from the President of the United States, you should vote for someone else.

This is the speech that convinces Lyman to jump ship. This is also the speech that angers Bartlet’s other aides enough to the point that Bartlet fires them, leaving no one but Toby Ziegler and Leo McGarry on his staff. This leaves room for the enthusiastic Lyman to recruit Seaborn, while Ziegler flies out west to pick up C.J. Cregg. So this, right here, is the turning point that puts Bartlet in the White House.

First, could someone please explain what “if fidelity to freedom of democracy is the code of our civic religion, then surely the code of our humanity is faithful service to that unwritten commandment” means? Diagram it on a whiteboard. Rewrite it with synonyms. Something. As far as I can tell it’s gibberish. If Sorkin writes Bartlet like this to make him sound impressive, it’s a con game.

Of course, maybe Sorkin writes Bartlet like this to make a deeper point: that Bartlet is too smart for his own good. Bartlet means well – he voted down a milk subsidy so that poor kids could buy milk, after all – but he’s too ivory tower. This is why he needs the dream team of Ziegler, Lyman, Seaborn, McGarry and Cregg around him. He has all these great ideas, but he needs more savvy operators to help him communicate them.

Communication is a key theme of The West Wing; the first two episodes (I’ve seen) make that obvious. Three of the key cast are staff members tasked with communicating, not setting, the President’s agenda: Ziegler, Seaborn and Cregg. When you have a show that reflects the creator’s values that closely, such focus means something. Sorkin clearly believes that his beliefs are of immense worth to America, but that they haven’t always been communicated as effectively. If only the right people said the right words at the right time, America’s opinions on (say) civilian gun ownership would turn around overnight.

There were 36 homicides last night. 480 sexual assaults. 3411 robberies. 3685 aggravated assaults, all at gun point. And if anyone thinks those crimes could have been prevented if the victims themselves had been carrying guns, I only remind you that the President of the United States was shot last night while surrounded by the best-trained armed guards in the history of the world.

So says C.J. Cregg in a press briefing, early in the afternoon on the day after Bartlet has been shot (S2E2). Let’s take the stats Cregg reads off at face value, even though I strongly doubt that the DoJ would have its act together enough to collate the police blotters of even the fifty largest metropolitan areas in the United States and present the findings to the White House Press Secretary within eight hours of the President being shot. I also find a few grains in “the best-trained armed guards in the history of the world”; I imagine some of the more paranoid dictators of the Eastern hemisphere could match the Secret Service. Hell, SO14 has been dealing with Provo IRA bomb threats for years, and they have their act together. 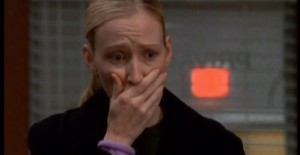 But, again, take those facts for true. Assembling them in time for a press briefing must have taken a heroic effort. Reeling them off, in parallel with a shooting attack on the President, is a conscious choice. Why bring it up? Because Bartlet is such an ideal leader that every part of his life is a reflection of his values. His shooting demonstrates how common handguns are in American culture and how they can be used to violent ends – the unspoken conclusion being “better efforts to control them would have kept those people, and the President, safer.”

Note, however, that Bartlet’s shooting does not demonstrate the increased need for surveillance of suspected violent offenders without a warrant. It could. If Cregg can assemble a list of shooting victims overnight, she can surely assemble a list of crimes that could have been prevented if only the cops had tapped the perpetrator’s phones. But she doesn’t. Two shooters coordinated with a third spotter to take potshots at a Presidential convoy, a feat that takes planning, communication and audacity. They all shared ideological ties (white supremacy) that encourage violent action against the administration of the U.S. The lesson here? Keep handguns out of the hands of criminals.

So why does the Second Amendment get the red pen and not the Fourth? Because Bartlet’s life has to be a reflection of his values. Everything he does, he does for a reason; everything that happens to him happens to him for a reason. Even if the reason doesn’t touch him directly – Bartlet wasn’t the target of the attacks; his African-American aide, Charlie Young, was – things gravitate toward him because of his importance. It’s not that Bartlet’s staff had to seize the opportunity to speak out against gun violence because he was the victim of it. Bartlet was a victim of gun violence because he supports gun control. Not rationally – it’s not like the white supremacists were making a pro-Second Amendment stand – but metaphysically. It’s guns vs. Bartlet and Bartlet has to win.