AND IT’S SURELY TO THEIR CREDIT

Ainsley Hayes deals with her first week of working in a hostile White House. CJ chases down a disgruntled general. Sam tries convincing Josh to sue the white supremacists behind the men who shot him. Bartlet tries recording the weekly radio address despite several distractions.

If “In This White House” was a setup to the developments in “And It’s Surely to Their Credit,” I get what Sorkin was trying to do. It’s not the best choice, since an episode should stand or fall on its own merits, but it makes “And It’s Surely …” that much stronger. There is a theme to this episode, unlike “In This White House,” and it’s a theme that strikes right at the heart of the series. 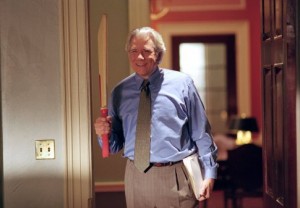 This episode is replete with people rattling off trivia to win arguments. When CJ is facing off with the retiring General Barrie, she answers each of his criticisms of the President, and of recent defense strategy, with not just a string of facts but with meaningful insight as well. Sam tries to excite Josh about suing the Klan by delivering a series of precedents (all real, by the way). Abbey forestalls Bartlet’s excitement by launching into a list of historical women whom the U.S. has yet to honor. And there’s a recurring debate over whether a lyric came from Gilbert and Sullivan’s Pirates of Penzance or H.M.S. Pinafore.

GENERAL BARRIE:
Two divisions, the 10th Mountain Division at Ft. Drum and the 1st Infantry in Germany, have been rated C4. That’s the lowest of four possible readiness grades. It means, “Unfit for service.”

C.J.: No sir. Again, with all respect, I hate to disagree, but it means unfit for service based on the Pentagon’s “two war” doctrine. It’s based on how fast these divisions would be able to extract themselves from their peacekeeping mission, retrain on home bases, and ship off to a second of two, full-scale Gulf-War-sized conflicts.

In three of these four instances, victory goes to whoever has the best grasp on the trivia at hand. Abbey gets Bartlet to mention women who need to be honored in his radio address. C.J. gets the general to back down, not only answering his points but also leveraging some knowledge about military history to extort his silence. And Sam convinces Lionel Tribby that “He is an Englishman” comes from Pinafore, not Penzance by citing his history with the Princeton Gilbert and Sullivan Society.

Having a more complete knowledge of precedent is the key to victory over your opponents in The West Wing. We see that in a few other places, and will doubtless see it again, but it’s bold here. You prove that you’re right by proving that you know more about the subject than the other guy, and you prove what you know by reciting it at hummingbird speed. He who has the best memory for quotes wins.

This brings me back, as promised, to Bartlet’s rant to the Dr. Laura stand-in at the end of “The Midterms.” Bartlet proves he knows the Bible better than she does by rattling off a number of barbaric punishments, chapter and verse. The implication, unspoken but obvious, is that Exodus and Leviticus are full of lots of monstrous trivia that nobody lives by today. The President wins because he has more data on his side. “That’s how I beat him,” he tells Toby at the end, referring to an earlier political opponent he’s been stressing over.

I’m leaning on this point because it’s a distinctly Sorkin choice. The staffers of the Bartlet administration are heroes because they have facts and precedent on their side. But we could just as easily imagine a staff that was heroic because they disregarded precedent. “To hell with tradition,” Sam might say. “So what if no one’s ever sued the Klan because of a tenuous connection to some lone wolf assassins? Let’s beat a new trail!” It wouldn’t even be that jarring of a story. We’re more accustomed to our heroes doing new things than wrapping themselves in the mantle of the old.

Or let me put it another way. Suppose Leviticus 18:22 said homosexuality was an abomination, but none of the other chapters of Leviticus said anything too bad. Would Dr. Jenna have won that face-off?

But The West Wing isn’t about breaking with tradition. It’s steeped in tradition. The staffers aren’t pioneers; they’re magistrates. They know all the twists and turns of the institution of democracy, and they prove it by keeping every obscure detail at their fingertips. 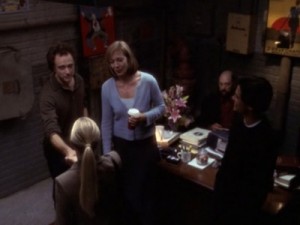 This, I suspect, is a large part of The West Wing‘s appeal. It tells smart people that their mastery of details is not only valuable, but a sign of goodness. It’s a Kantian ethic: right emerges not from right ends, but from correct action. Correct action – fidelity to the facts; knowing Pentagon readiness standards or Leviticus verses better than anyone – naturally flows into right ends. The categorical imperative tells us to keep our eyes on the path; that way, we’ll know we’re doing the right thing.

Duty is the other major theme of “And It’s Surely …”. When arguing with Ainsley about Penzance, Lionel cites “Penzance or Iolanthe … one of the ones about duty.” “They’re all about duty,” replies Ainsley. This observation pops up more than once in the episode. Gilbert and Sullivan’s musicals are all about duty. They all involve formal societies, whether under the flag of England, Japan or a pirate fleet. The protagonists are torn between their hearts and the obligations of their social status. Fortunately, comic twists at the end allow them to fulfill both (you’re secretly a noble! everyone marries everyone else!).

Ainsley Hayes joins a Democratic White House out of a sense of duty. She feels drawn to the pomp and tradition of American government and will jump at the chance to serve it, even if it’s under an administration she disagrees with. General Barrie claims that it’s his duty to alert the public to “staggeringly dangerous vulnerabilities” in the American defense posture. CJ points out, however, that the General is following his heart, not his duty, and that his own sense of protocol is weak. Everyone argues about and wonders over what their duty entails and how best to live up to it.

And that’s one of the most striking tones of The West Wing. Conservative critics may have struggled with the show due to Sorkin’s liberal politics, but the characters are hardly radical. Nothing they propose is radical. Rather, they spend significant portions of each episode arguing over which of them hews closest to tradition. Toby looks for a legal precedent to justify sending the FBI after the Klan. CJ panics because she thinks she’s leaked grand jury information. And everyone in the White House staff has an opinion on Gilbert and Sullivan.

It’s easy to throw an old framework up against the wall and put a bullet in its head in the name of revolution. It’s hard to work within the system and still get the changes you want. And while yours truly would say that working within the system isn’t always worth it, I still recognize the appeal. 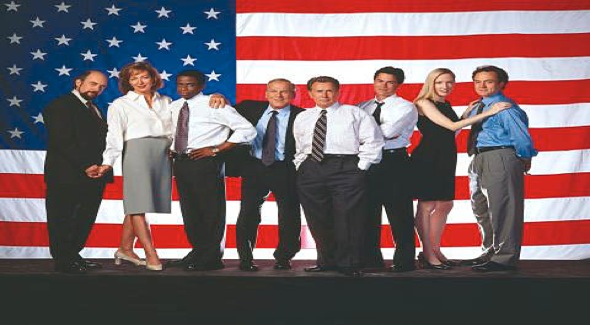