We don’t usually do this thing, but I’m making a request.  I’m making a request to all you people out there in OTI land who think you can write a good article for our site.  I’m specifically addressing this to the wafer-thin Venn diagram intersection of the sets “video game nerds” and “fans of symbolist whaling literature.”  More specifically, I need someone to overthink the connections between Moby-Dick and Final Fantasy X.

It drives me crazy that there’s nothing on the internet about this yet.  The game is ten years old, people!  Someone other than me has got to have noticed this!

I can pick the low-hanging fruit myself.  For instance, Final Fantasy X and Moby-Dick are both about a ragtag multi-ethnic collective that travels around the world pursuing a quasi-mystical sea beast that leaves a trail of destruction in its wake.  Said beast is pale in color, with a twisted jaw (although the beastie designers at Square seem to have missed the memo, giving Sin a face that’s more blue whale than sperm whale).  And in both cases — spoiler alert — the whale turns out not to be what they’re really hunting after all, because it’s only a sort of disguise worn by God himself.  (Bigger spoiler alert:  “All visible objects, man, are but as pasteboard masks.”) 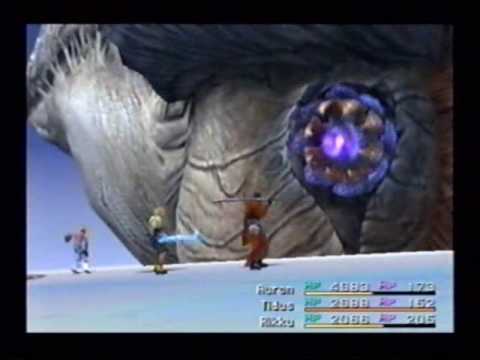 That right there would be enough for an OTI post and a half, I’m thinking.  We don’t even need to get into the fact that Wakka is totally Queequeg.  But wait!  There’s more!  Both show that gadding about after whales ends up destroying family relationships! (Tidus:Jecht::Ahab:Ahab’s unnamed son) Both involve reams and reams of scientific-ish trivia which in no way corresponds to reality!  (“Slimes are weak to the Firaga spell!”  “Be it known that, waiving all argument, I take the good old fashioned ground that the whale is a fish.”)  And also, Wakka is totally Queequeg!  Or at any rate, he’s a cheerful and muscular Polynesian guy with devout religious beliefs, who, within minutes of meeting the hero, engages him in a playfully homoerotic wrestling match.  (Here I’m thinking of the Moby Dick chapter “The Counterpane,” and the bit in Final Fantasy where Wakka grabs Tidus in a full nelson and won’t let go of him until he agrees to join his underwater soccer team.)

Thirsty for more?  So am I.  The problem lies in the fact that I have not, myself, played Final Fantasy X.  I had a roommate who was pretty deep into it for a summer, and as you can see it made an impression on me.  But I’m not about to sink the 100+ hours it would take to properly research the thing (even if I had a copy, which I don’t), and I’m also not willing to half-ass the article.  The connections are so obvious that the article needs to be written, but it deserves to be written by someone who can give both Final Fantasy X and Moby Dick the kind of serious treatment they deserve.

P.S.  I’m open to the possibility that the connections are not obvious at all, that I’ve completely misrepresented what Final Fantasy X is about, and that no one who’s ever played the game would think it was like Moby-Dick for a minute.  If that’s the case, please tell me off in the comment thread, so that I can at least get the idea out of my head.

8 Comments on “Overthink This! A Call For Submissions.”