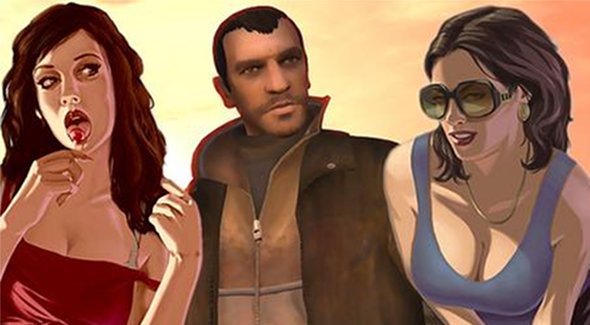 Niko Bellic has libertarian free will in different area codes.

Matt’s recent post on morality in first person shooters provoked my thoughts more than a little bit.  And it got me thinking about Grand Theft Auto, always something of a lightning rod for videogame morality.  Specifically, it had me thinking about the scenario all the pundits kept kicking around back when GTA3 first came out:  the fact that, in that game, you can hire a prostitute, have sex with her in the back of your car, pay her, then jump out of the car and beat her to death with a baseball bat, and take your money back off her corpse.  It’s certainly not the only thing you can do in GTA3 that might give the moral guardians reason to be concerned, but for some reason it’s the only one people talked about.  And to be fair, it does capture what’s a stake in the game pretty nicely.

The interesting thing about the prostitute scenario is that it’s up to you.  At no point are you required to take these actions.  They don’t even benefit you very much.  I mean, yes, some health points, a few dollars.  Neither of these are at a particular premium in the GTA games.  So if GTA is an evil game, and Rockstar an evil game studio, it’s because they created a world where it is possible to do evil.

There are two other worlds, two other moral universes, that we ought to consider here. 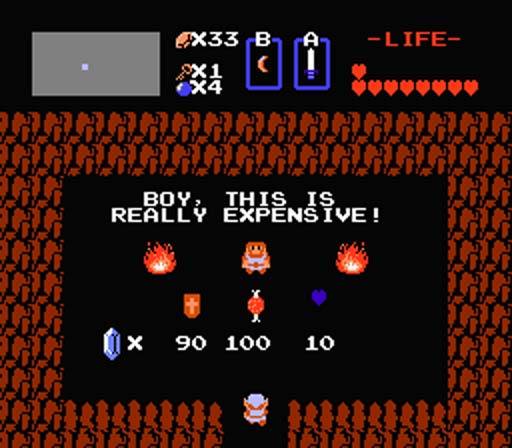 This article is full of link bait.

One is the traditional video game universe — take the original Legend of Zelda, just as a convenient example.  The possibilities for creative depravity in games like this are rather impoverished when you compare them to Grand Theft Auto:  next to Liberty City, Hyrule looks downright idyllic.  Here the car rests unjacked, here the ass goes un-cap-busted, here the prostitute can ply her trade in peace — or could, if the Great Fairy wasn’t out there giving hearts away for free.    The player can’t murder innocent bystanders here either:  if you try, you just get zapped by fireballs, or bum rushed by angry chickens.  But he/she can, and must, murder all the non-innocents, which means just about everything that crawls, swims, flies, or most vexingly teleports.  (Freaking Wizzrobes.) There are some games where it’s possible, although difficult, to do a “pacifist” run where you avoid killing enemies altogether.  But Zelda is not one.  Violence is literally built in:  the levels are designed such that you often need to kill all the monsters in room A in order to open the door to room B. Which is, incidentally, like, the stupidest security system ever.  “Manager does not know combination to safe, but try killing the entire staff and see if it pops open automatically?”

Now, there are people out there for whom even this is too much, but they are not thick on the ground:  Link-on-Oktorok violence is never going to touch the same nerve as man-on-woman violence. This is partially because Oktorok’s aren’t visually designed to evoke an empathic response.  (For notes on what happens when a videogame character is designed to evoke an empathic response, see Perich’s post on Bioshock.)  But that’s not really a moral issue, it’s just a gut reaction masquerading as morality.  In moral terms, the reason we don’t care that Link is killing Oktoroks is that the Oktoroks are all out to kill Link.  Every violence done in Zelda is done in self-defense, and therefore justified.  The game is stupifyingly colonialist in its mindset — or rather, the mindset programmed into the game is the same one that tends to give rise to colonialism:  all that is other to me (an Oktorok, say) is hostile to me, therefore my violence against the other is justified; as is my exploration, mapping, and domination of the other’s territory, and my exploitation and consumption of the other’s strategic reserves of Triforce.  Which are, after all, just sitting there unused.  If anything I’m doing them a favor by coming in and putting those resources to work.  (There’s even one level where you have to coopt the local elites by buying off a Goriya with a piece of meat!  All that’s missing is some way to process the Triforce into opium and sell it back to the Oktoroks at a markup.)   Phrased in those terms, Zelda may not seem so moral after all, but that’s not what I’m trying to get at in this post.  We can’t blame Zelda for the excesses of real-world colonialism, because Zelda presents us with a world in which the colonialist fantasy is verifiably and objectively true. The Oktoroks really are hostile, they really don’t have human agency.  And in such a world — which isn’t the real one, just so we’re clear — there really wouldn’t be anything wrong with colonialism.  In any case, most people who complain about GTA don’t complain about Zelda.  It is impossible to do evil in Zelda, therefore Zelda is not an evil game, and Nintendo is not an evil company.

The other moral universe we ought to consider is our own.  Let’s not forget that Rockstar, those evil, evil bastards, still only created a game containing the image of violence.  Fortunately, creating a world in which actual prostitutes are murdered by their clients is beyond their capabilities.  Unfortunately, such a world is all too familiar to we who dwell therein.  And this brings me to the other thing that has been on my mind these last few days: the theodicy problem, also sometimes known as the problem of evil.

The problem of evil is, plainly stated, is the “why do bad things happen to good people” argument against the existence of God.  Slightly more technically put, it runs like this:  God is supposed to be omniscient, omnipotent, and morally flawless, right?  Well, evil exists in the world. This suggests that God either doesn’t know that evil exists (and therefore is not omniscient), or knows but doesn’t care (and therefore is not good), or knows and cares but can’t do anything about it, (and therefore is not omnipotent), or some combination of the three.  Therefore, God does not exist. Or at least, God lacks one or more of the attributes traditionally held up as divine in modern religions.  The problem of evil doesn’t really work as an argument against the existence of Zeus.

Theodicy, properly speaking, is the defense of God against this kind of charge, although it sometimes gets tossed around more casually than that, simply to refer to the whole issue.  Perhaps the most notable and popular theodicy is the argument that the capacity to do evil is a necessary element of free will.  To quote C.S. Lewis’ The Problem of Pain (or more accurately, from my perspective, to quote Wikipedia),

We can, perhaps, conceive of a world in which God corrected the results of this abuse of free will by His creatures at every moment: so that a wooden beam became soft as grass when it was used as a weapon, and the air refused to obey me if I attempted to set up in it the sound waves that carry lies or insults. But such a world would be one in which wrong actions were impossible, and in which, therefore, freedom of the will would be void; nay, if the principle were carried out to its logical conclusion, evil thoughts would be impossible, for the cerebral matter which we use in thinking would refuse its task when we attempted to frame them.

Remember again that those who consider Rockstar Games to be evil over stuff like this, or the hackable “hot coffee” sex minigame in GTA:San Andreas, are getting angry at the company for giving the players an option to do evil.  They would prefer games with less options, games like Zelda where the player lacks moral agency.  To a certain degree this is understandable.  Video games are still marketed to children (although less and less), and our society systematically and categorically denies children certain options for their own protection.  Or at least ostensibly for their own protection.  This is an issue where our sense of cause and effect can become confused:  when people ask us to think of the children, they often seem to be less concerned with preventing material harm and more concerned with preserving “innocence,” that is, with preserving the child’s absence of moral agency, with preserving the child’s status-as-child.  The free-form sandbox of cruelty in Grand Theft Auto is certainly not the best way to invest a game with moral agency.  You’d want to include options for good behavior that go beyond simple avoidance of bad behavior. (And better attempts along these lines have been made with games like Bioshock and Fable, although these have problems of their own).  Still, GTA is a pretty good start.  To advocate a return to the “innocent” morality of Zelda is like picking Teletubbies over the Brothers Grimm, a vote for children’s entertainment designed quite precisely to keep children infantilized.

16 Comments on “Grand Theft Auto and the Problem of Evil”