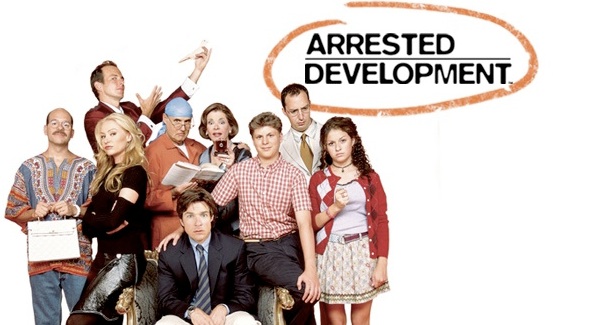 Let it go.  It’s cancelled – it’s been cancelled.  It’s been off the air now for longer than it ever was on the air, and y’all should find something more topical to obsess over.  I hear you say these things, and I have said them to myself often enough.  But personally, I sometimes find it hard to talk about today’s shows, because I still haven’t quite come to grips with Arrested Development.  (For instance, the post you’re reading started out as something about Modern Family and identity politics.)  So that’s one reason for yet another rumination on this show:  maybe if I can get some sense of closure on it, it won’t keep hijacking my train of thought like this, although I doubt just this one post will be enough.  Another reason is that sometimes a little distance – in time, or otherwise – can be a good thing, if you’re looking to overthink.  While I’ve come across a lot of pieces online saying how great Arrested Development was, I haven’t come across many attempts to get into the why or the how of it.  And that strikes me as a failure on the part of the blogerati.  Even people who don’t like Arrested Development (sad, deluded fools that they are) usually recognize that there’s something radically different about the show.  It is not like other sitcoms – but just saying that isn’t enough, is it?  How is it different?  Why is it different?

One of the classic sitcom plot devices is to have a character do something self-serving, and then try like hell to hide, justify, or reverse the selfish act.  Say that you have a character, Alice, who baked a cake for a dinner party, and her friend Bob wandered in and ate all the cake an hour before the party.  The rest of the episode writes itself:  Bob denies eating the cake while frantically running around trying to bake, borrow or steal a new cake before the party starts.  The “justification” aspect doesn’t work so well in this particular example, since there’s no plausible way for Bob to claim that eating the cake was actually the right thing to do. (Although Larry David on Curb Your Enthusiasm would probably give it a go – maybe his blood sugar was crashing?) But if you introduce a third friend named Carol, who knows that Bob ate the cake, and spends the episode trying to convince him to come clean to Alice about it, then Bob is almost obliged to argue that the deception – which in itself is deeply self-serving – is actually the right thing to do.  After all, Alice is super worried about this party she’s throwing:  if she knew that her friend had done this horrible, thoughtless thing, it would just create needless stress… etc. etc. etc.   These scenes – hiding, justifying, reversing – can easily make up the episode’s entire A plot.  Throw in a couple of unrelated threads (maybe Carol has a date with a wacky guest star?), and some slapstick business with the pastry (maybe Bob spills frosting down his trousers?), and you’ve got yourself an episode.  The whole driving force of the narrative is devoted to expanding the interval between the moment at which Bob realizes that he’s done something horrible, and the moment where he faces up to the consequences.

You can find episodes along these lines in sitcoms old and new.  Lucy accidentally orders seven hundred pounds of meat from the butcher, and she and Ethel need to hide it from Ricky.  (The very act of hiding it is the self-centered part here, not the order, which was an honest mistake.)   DJ gets her ear pierced by Kimmie Gibbler, and has to hide it from Danny and her uncles.  Liz Lemon gets a flu shot after telling her crew that she’s refusing it as a gesture of solidarity, and… well, you see where this is going.  Depending on what kind of fictional world you’re dealing with, there are a few ways the plot can wind up.  Your Full Houses and your Charleses in Charge would have Bob realize the errors of his ways and admit everything to Alice, at which point everyone has a big discussion about responsibility that ends with a group hug.  Seinfeld and Curb Your Enthusiasm would end right at the moment where we learn that one of the dinner guests is the person who sold Bob the replacement cake.  It’s still a moment of recognitio, but true to the show’s mission statement there’s “no learning, no hugging.”  The early years of The Simpsons worked like Full House; in the later, painfully self-aware seasons, the writers often flirted with the morally dissonant ending where Bob successfully replaces the cake, Alice’s party goes great, and Carol is left to roll her eyes in disgust at a world gone mad.  (Think of the “Homer becomes an outsider artist” episode, which ends with Homer triumphantly flooding the town.  Wonder how long it took them to put that one back into syndication post-Katrina.)  And Arrested Development…

Well, Arrested Development wouldn’t have done that plotline at all. I watched the pilot episode again the other day, and I think that the whole show can be summed up by the following exchange:

Gob:  I thought that my contribution could be a magic show.

Michael:  Wait a minute.  I just remembered something.  Dad’s retiring, not turning six.

Gob:  Hey, come on!  I just bought this new illusion called the Aztec Tomb.  It cost like eighteen grand!  I’m gonna do it on the boat!

I’m gonna do it on the boat. And he does.  If Michael makes any further effort to stop it, we don’t see it, and we certainly don’t see Gob agonizing about it.   So the innovative thing about Arrested Development (or one of them, anyway) is that, while it’s still essentially about people doing self-centered things, most of the characters never even try to justify their behavior.  Or fix its consequences.  They sometimes pay lip service to hiding it, but never for more than a line or two.  Michael, who is really almost as self centered as any of the others, comes off as the family’s moral center merely because he is a standard sitcom character:  he still runs around trying to convince people that he’s a good guy.  The rest of them don’t care – it’s not that they’re wallowing in evil, rather, they’re so self-involved that the possibility that they’re in the wrong never even occurs to them.*  And because of that, Arrested Development‘s plotlines couldn’t just follow the standard structure I outlined above.  They had to be about something else – most typically, the characters’ various selfish actions end up interacting in unpredictable ways so that everyone’s plans are ruined, ideally in some kind of kinetic set-piece where Tobias kicks over a model city in a mole costume and George Michael flies in on a jetpack.

Since the demise of Arrested Development, various shows have copied various elements of its style.  It’s Always Sunny in Philadelphia seems like a very different show at first blush:  it’s much darker in tone, and depends on a loose, improvisatory energy in many scenes that is quite foreign to Arrested Development’s sensibility (that of a tightly-wound all-combinatorial cuckoo-clock).  But the fact that the characters rarely even try to convince people that they are good is Arrested Development all over the place, as is the basic plot structure of  “lunacy slowly builds, then explodes.”  It’s Always Sunny in Philadelphia therefore keeps some of the darkest elements of Arrested Development, while jettisoning everything that was frothy and fun — while Sunny is a brilliant show in many ways, it can be kind of punishing to watch.  (It’s interesting that while Arrested Development was about the super-rich, several of the characters on Sunny are impoverished.  And also interesting that, for the characters on Sunny, wallowing in evil is always a definite option.  Not sure what the message is supposed to be, there.)

The other followers of Arrested Development – most notably Better Off Ted, Community, and the show that this piece was supposed to be about, Modern Family – have it the other way around.  They kept Arrested Development’s meticulously, almost rigorously crafted dialogue, its zippy pace, and its adventurous-for-a-sitcom cinematography.  They cut away the bile.  Better Off Ted (which, really, more people should have watched while they had the chance), was particularly interesting because of the character of Veronica, played by Arrested Development alumnus Portia de Rossi.  In the early episodes, Veronica was meant to be a sort of souped up Jack Donaghy character:  an unapologetically egotistical corporate shark with buzzwords in the place where human emotions should be.  Very quickly, though, the writers buffed the rough edges off of her, giving her love interests, friends, a maternal instinct, and all the other things that sitcom protagonists typically have, even when their actual behavior is that of a giant, flaming, distended asshole.  In the early running, when Veronica did something terrible, de Rossi played it the way she played it when Lindsay Bluth did something terrible.  You got the impression that Veronica literally didn’t understand why someone would be upset at the idea of selling a product that uses baby pandas for fuel.  Later on, the character became more recognizably human — or rather, more recognizably a sitcom character.  The jury’s still out on whether that’s more human or less.  But in any case, she would make excuses for herself.  Sometimes she would even try to make amends.  Most fundamentally, when she announced the next horrible policy that the company was instituting, you could tell that she felt bad about it.  Which is something that Lindsay (and by extension, any of the other Bluths), would never think to do.

In other words, sitcoms like Better Off Ted and Modern Family still use the same standard redemption-based sitcom meta-plot as Full House.  And that’s why, although all the shows I’ve listed here are great, I doubt that any of them will exercise the same kind of hold over the imagination that Arrested Development has.  And this is fine:  while I firmly believe that originality is an objectively Good Thing in any sort of art, including sitcoms, I don’t believe that it’s the only Good.  If it was, the ratio of good to bad would be too depressing to even contemplate… Luckily, there is something to be said for putting old wine in new bottles, as long as the bottles are really nice.  And this is arguably the thing that Modern Family does really well both in terms of its comedy and, yes, its identity politics.  But that post will have to wait for another day.

* This argument might need to be refined slightly.  There are multiple instances over the run of the show where various Bluths realize that they are self-centered jerks.  Gob in particular is prone to realizing that “[he’s] made a huge mistake.”  But these moments are generally reserved for the end of the episode, or at least the end of that character’s arc within the episode.  The moment where the psychological armor cracks, and the character sees through his/her denial, is as close as the show would let you get to traditional comeuppance.