Ah, fall is in the air. School is back in session, leaves are changing colors, and football players are sustaining life-threatening concussions for our enjoyment. That must mean it’s time for Overthinking It’s annual round of analysis of the IMDb Top 250 Movies list, third edition! This year’s installment comes a bit shy of a full year since the previous edition, but with the venerable movie website’s 20th anniversary fast approaching (October 17–mark your calendars), I wanted to get this out in time to be part of the conversation. 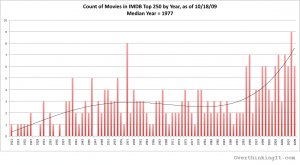 Missed last year’s edition? Here’s a quick summary: as you know, the IMDb Top 250 list is an organic list, constantly changing based on the whims of user ratings, and as such, I thought it’d be interesting to see how this list changed over time. The short answer: when comparing the list from October 2008 to that of October 2009, the median year of the dataset increased by 2 years, which suggests that the lists’ known bias towards newer movies intensified over that year. As further evidence of this bias, I also found that twelve of the nineteen additions to the 2009 list came from 2008 and 2009, and that only five of the nineteen drop-offs from the list came from the last decade.

So how did this year’s comparison turn out? Have Internet fanboys intensified their grip on the IMDb Top 250 list? Are all of the Twilight movies now in the Top 250? Find out, after the jump!

First, I present the Big Impressive Graph Which Actually Tells Us Very Little By Itself: 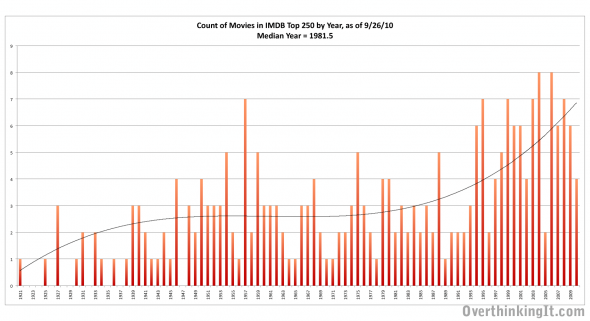 As was the case last year, the solid line is a 4th order polynomial trend-line. Also as was the case last year, this graph by itself doesn’t tell you a whole lot, other than that the list is very friendly to movies in the past decade or so. And that I like graphs a lot. There are more graphs of movie lists in the 2008 and 2009 editions if you share in my fascination, but let’s not get distracted. On to the main findings!

When I fired up Excel to do this analysis, I was pretty sure that I would find that the overall shift of the dataset in terms of median year would be greater than the concurrent shift in time. And I was right:

Yup, you read that right. Over the course of the last year, the median year of the IMDb Top 250 movies list increased by 4.5 years, which suggests that not only is the lists’ bias towards newer movies still present, it’s intensifying over time.

So what’s driving this tilt towards newer movies?

Compared to the 2009-2008 additions, the 2010-2009 additions are less concentrated over the past two years, but they are overwhelmingly from the last decade:

I think it’s pretty safe to say that Kick-Ass is the primary beneficiary of the IMDb fanboy effect that pushes newer genre movies onto the list when conventional wisdom says they shouldn’t belong there. Last year, I singled out Zombieland as an example of this phenomenon, and sure enough, it made this year’s list of…

Some newcomers to the 2009 list did predictably drop off as their fanboy/Oscar effects wore off, but just as it was last year, the list of drop-offs is dominated by older movies. Frankenstein, the iconic horror classic, is no longer in the Top 250 List? Well, he joins Nosferatu, who fell off the list last year. 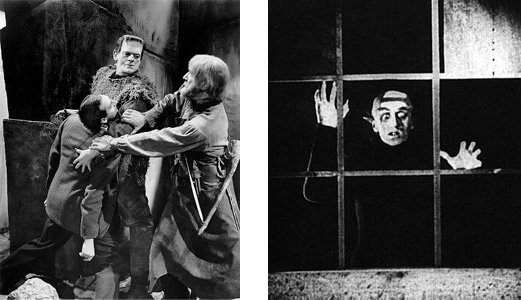 So now that we know this tilt towards newer movies is intensifying, does that change our perception of the IMDb Top 250 list? We’ve always known it to be a more populist take on movie rankings than critic-driven exercises such as the AFI Top 100 list, Rotten Tomatoes, etc., but will its populism eventually go too far, thereby undermining the validity of the list?

It’s tough to say. At what point does this system become broken? Probably when all of the Twilight movies are on the list, but that’s an extreme example. And even if that day comes to pass, we’d have only ourselves and our society’s changing value system to blame (assuming this is not the result of a dastardly 4chan prank or systemic failure of the ranking algorithm).

I’m always surprised to see people get so worked up over the IMDb Top 250 rankings. Distilling a complex movie down to a single data point an inherently counter-intuitive exercise, yet we so desperately want there to be an authoritative way to do so. And when one seems to emerge–in this case, the IMDb list–we can never agree on its composition or its validity.

My stand-offish attitude may at first seem at odds with this whole data analysis exercise, but I argue that whatever your stance is on this or any pop culture ranking list, it only helps to have more information like this at your disposal. If for no reason, it helps prepare you for conversations with people who approach this list far more casually or with less skepticism than you do. (It may also make you come off as an insufferable pedant to those people, but I bear no responsibility for any of that.) But more importantly, it reinforces an obvious, yet often forgotten, fact: tastes change over time, and they do so unpredictably. There’s no guarantee that the gulf between current year and median year on the IMDb list will continue to narrow, just as there’s no guarantee that Patton will remain on the list. Or that New Moon won’t ever get on the list.

Readers: download the datasets for the last 3 years and go to town! See what other hidden trends lie within these numbers and post your insights into the comments. Just no fighting over whether Shawshank Redemption (number one across all three years) is better than The Godfather (number two across all three years).